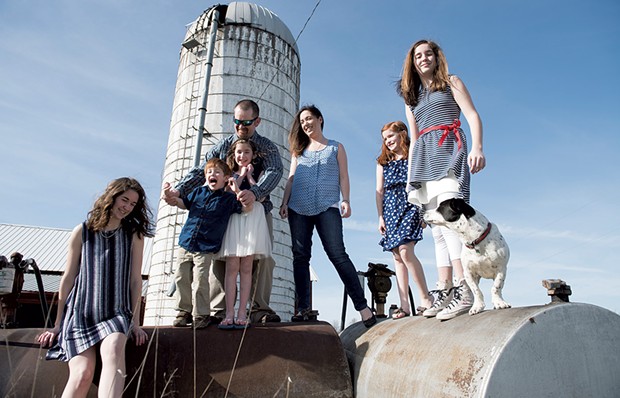 Nancy and Bob Sunderland are a classic Vermont pair: a small-business entrepreneur and a fifth-generation dairy farmer, respectively. While she checks her inbox and fills orders for ring slings, he tends to the cows and fields on their Addison County farm.

Their backgrounds are just as different as their jobs. Nancy grew up in suburban Essex, Vt., with a father who worked at IBM, while Bob was raised on the family farm in Bridport, working alongside his father and grandfather.

Instead of going straight to college, Nancy joined the Marine Corps after high school, attended boot camp in Parris Island, S.C., then drove trucks in Okinawa, Japan. Later, in California, she earned a Navy achievement medal for instituting a safe driving program for her squad. At age 22, she left the military and enrolled at the University of Vermont, where she studied business administration. She lived with her parents, working two part-time jobs and caring for her young daughter, Brittany, from a previous marriage.

Nancy met Bob — who had always lived in Vermont save for a six-month stint skiing with buddies in Colorado — through friends in Burlington. The two found common ground in their Christian faith, and were engaged five months after meeting.

By the time Nancy moved from Essex to the unfamiliar Bridport farm where Bob grew up and, soon after, she became pregnant with their first child, Abigail. Vanessa came 19 months later, and, in 2008, their daughter Laila was born. They lost a baby boy at 19 weeks in 2011, but the next year Nancy gave birth to their son, Beau.

An avid baby-wearer, Nancy would tote her little ones around while she tended to her many tasks as a mother and farmer's wife. When Beau was born, she discovered woven wraps, which are less stretchy than knit wraps. She loved how they felt, and how they held her baby. Nancy decided to design her own, so in 2013 she enrolled in the Women's Small Business Program at Burlington nonprofit Mercy Connections and launched Poe Wovens the following year. When she started the business, she sold both baby wraps and slings, but currently the company only sells ring slings.

Nancy is the Poe Wovens' only employee, but she uses independent contractors for bookkeeping and textile and website design. She works around 25 hours a week, while her kids are at school, and has sold over 1,000 baby carriers during her two years in business.

As conservative Christians and Republicans, the Sunderlands are in the minority in Vermont. Handwritten house rules and a "How to be Caught Being Good" sign — complete with Bible references — hang in the family's bright farmhouse kitchen. Nancy writes for the Burlington VT Mom's Blog, in part, she says, "to get a different perspective out there."

Bob: I wake up about a quarter of five. I head out the door and go milk the cows. I like to start milking around 5:30, and then I don't usually come in until ten o'clock or 10:30. So I miss the morning routine most of the time with the kids. Except on Thursdays [when] I don't milk, and one day on the weekend.

Nancy: Then I get to sleep in! But normally I get up at 6:30. We are all not morning people — except him! We have to motivate each other in the morning to get moving. Usually our teenager drives herself to the high school in Middlebury, and the little kids can either ride the bus or sometimes I will bring them to school.

Nancy: The housework does tend to pile up because I am away from the house at that crucial dinnertime. I'm in Middlebury with activities and sports for the kids. The kids hate it, but I need their help. So we have a chore chart, and I make them consistently help me with the housework. I try to get it done early in the weekend so that we can have that time together, so that it's not like, "No, we can't go outside to play because you have to vacuum."

Bob: I think we do now, but it was really crazy when the kids were all younger. It was nuts! I mean, now if the older kids need something to do, I can take them with me. I can have them follow me around, or if they just want to go over toward the farm, they can go ride their bikes anywhere over there.

Nancy: One of the things that helped when we had a bunch of little kids was that we had au pairs. It was a lifesaver. I mean, I remember sitting in a counseling office [before we had au pairs], and the counselor was saying, "So are you saying you need Bob to help you more with the kids and the dishes and this and that, or are you saying you just need someone to help you?" And I said, "I just need help. I don't care where it comes from! I just know that I am drowning in this sea of little people and chores, and I am going to go bananas if I don't get some help!"

Bob: We are looking into building a new facility with robotic milkers now. That will alleviate some of the hands-on work with the cows. One of the biggest things is, it's just going to offer flexibility. If there are things I need to do with Nancy and the kids, I'll be able to do that easier.

Nancy: The willingness to be flexible has been key in us finding our parenting groove. I wouldn't say we have a balance, per se, but we make it work by being flexible and adaptable to each other's needs, work schedules, et cetera. My military training in action: adapt and overcome!

On setting an example:

Nancy: It was important to me that I wanted my girls specifically — since I have four daughters — to see that not only Dad but Mom can work and have a business and follow her dreams. And even if it doesn't go well or make a lot of money, I'm doing something that I am passionate about.