How a Burlington Grandmother Manages Essential Roles at Work and Home 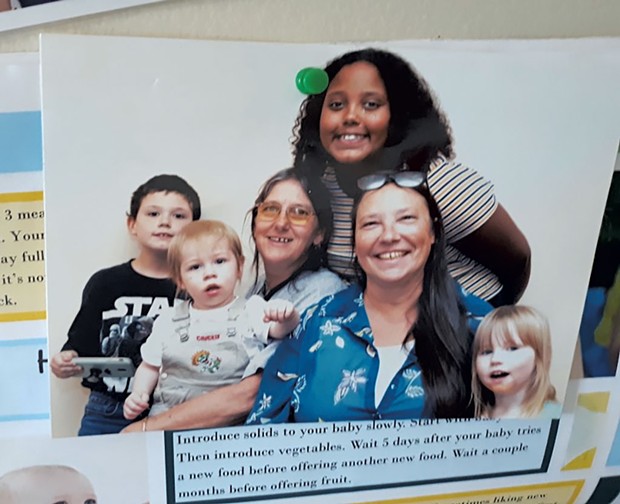 This is especially true of the low- to middle-income Vermonters who utilize state and federal social support programs. Some families lean heavily on this network for food and fuel assistance. Now they must be even more resourceful to get what they need.

The Champlain Valley Office of Economic Opportunity assists families with resources ranging from housing assistance to financial skills building. Asked for an example of someone who negotiates the various systems successfully, the nonprofit connected Kids VT with Burlington resident Diane Deso.

To keep her family afloat, she stitches together a combination of wages from her part-time job, support from community organizations, disability payments, and housing and childcare subsidies worth around $3,500 a month. Her secret to making it work: "planning, planning, planning."

Deso has held numerous jobs in her life, from welder to Macy's sales associate. Her favorite was on a crew repairing the bridge between Winooski and Burlington, where she assisted with pouring cement.

In the early 1990s, Deso graduated from Step Up — a national employment training program for women — and she joined a construction crew. Now 56 and the mother of four grown children, Deso proudly reminisces about demolishing a cement wall in South Burlington High School. For three days, she worked with a cement saw, a sledgehammer and a jackhammer, and — by herself — got the job done.

Last October, she began working part-time at Walgreens. She described her wages as not "too, too bad" at $13 per hour.

She uses a subsidy through the U.S. Department of Housing and Urban Development's Section 8 program to pay $318 of her $1,600 rent each month. When she took the Walgreens job, she worried the subsidy would shrink, increasing her rent costs. To her relief, the local Section 8 staff was able to freeze her subsidy at its current rate for a year. When it ends, she expects to pay $100 or $200 more per month.

Deso suffers from a degenerative spine condition, which she attributes to years of lifting heavy objects in various jobs — although she said she has no regrets about doing any of them. Now, she receives about $900 per month in disability compensation and an additional $900 for the care of her two adopted grandchildren. Child-Only Reach Up — cash assistance for adults caring for dependent children of relatives or friends — provides an additional $300 a month.

Last fall, Deso was able to secure a spot for her granddaughter in King Street Center's Early Education program, funded in part by Champlain Valley Head Start. Her youngest grandchild was also accepted into the King Street Center's Early Head Start program. There, Deso paid no tuition and was not required to provide diapers or wipes — another substantial savings. Deso considers herself fortunate that she doesn't have to pay childcare expenses. "The daycare piece," she acknowledged, "is really hard for a lot of people."

Deso and her grandchildren are frequent visitors at the Janet S. Munt Family Room in Burlington. Deso has attended family programs there since her oldest grandchild was small. In addition to children's playgroups, Deso participated in an adult wellness program there, which emphasized the importance of self-care for caregivers. "It's a really cool place to be, and you meet people from all around the world," she said.

Prior to December, Deso's household of five received less than $300 monthly in food assistance through 3SquaresVT. When federal funding for the program was slashed, an estimated 700,000 Americans were removed from the program. Deso's household hasn't received any additional funds for food for three months. "I don't think it's right," she said.

In March, when schools and childcare centers closed, Deso — like many others — was forced to make radical changes. Her supervisor allowed her to scale back her part-time hours at Walgreens to just Saturday and Sunday evenings, when her adult daughter can watch the four kids along with her own three youngsters. To supplement her reduced paycheck, Deso reapplied for assistance through 3SquaresVT.

She's grateful for a one-time bonus of $200 from Walgreens — which rewards her for being an essential worker who continues on the job, despite her worries about contracting the coronavirus and spreading it to her family. "I can't get this," she fretted.

With the children home all day, her family is "getting into a routine," doing schoolwork and art. Through a Front Porch Forum posting, Deso obtained paper, markers, crayons, sharpened pencils and more. She recently visited Feeding Chittenden and was especially pleased with the fresh fruit she got there.

For the past few summers, Deso and her grandchildren planted a garden at the Ethan Allen Homestead, through a program run by the Family Room. Though the Family Room is indefinitely closed, Deso hopes she'll still be able to access her plot at the homestead.

And — like countless others across the nation — she is hoping to receive a stimulus check from the federal government soon.

Got a story to share about how your family is "Getting By"? Email brett@kidsvt.com.