Books Behind Bars: Helping Moms Read to their Kids — from Prison 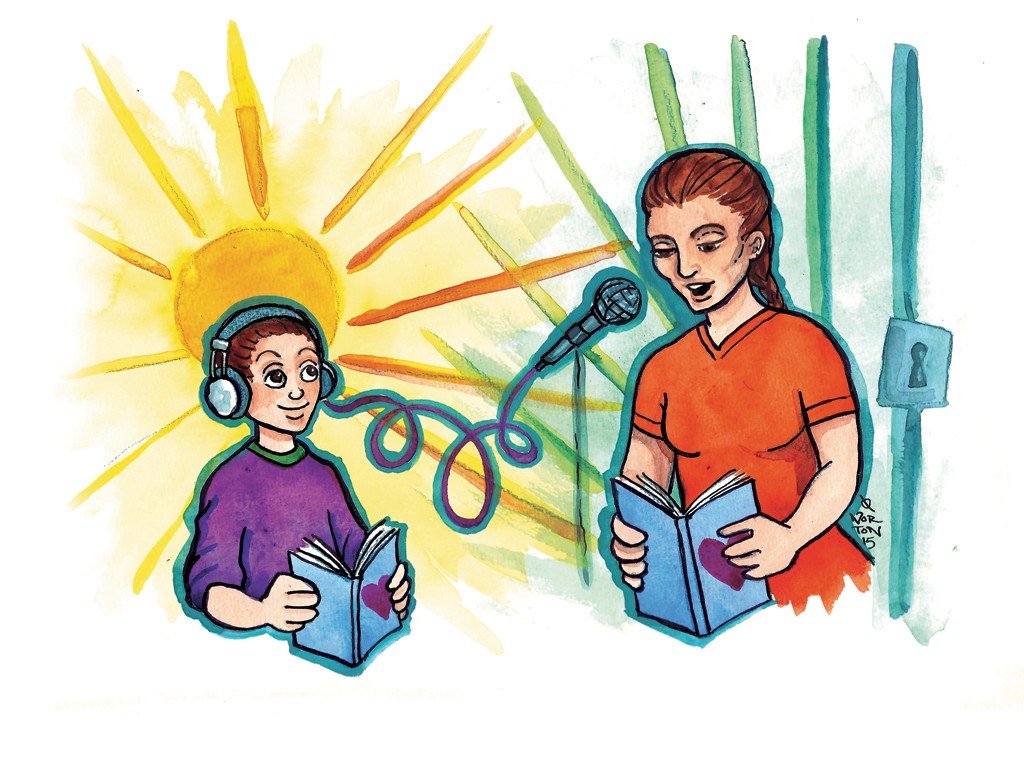 The mothers incarcerated at the Chittenden Regional Correctional Facility in South Burlington can't tuck their children in or kiss them goodnight. But sometimes, they get to read their kids a story.

One Sunday in January, an inmate in a bright purple T-shirt — part of the uniform for her job in the prison kitchen — settled into an office chair at CRCF and cracked open the book she'd chosen for her daughter: Lilly's Purple Plastic Purse.

The title character, a cute white mouse toting a stylish handbag, reminded her of the youngest of her three children, a smart little first-grader who drives her older sister to distraction.

"She's a little diva," the woman said with a smile. (The Vermont Department of Corrections regulations did not allow Kids VT to identify inmates by name or to ask them any direct questions.)

Her daughter, of course, wasn't with her that day.

Volunteer Laura Crain handed the woman a small digital voice recorder. Press the red button when you're ready to record, Crain explained. Start over if you need to. Take as long as you want. With that, Crain retreated into an adjacent office, giving the woman some privacy.

The woman, in her early 30s, pressed the record button and greeted her daughter in a cheerful, steady voice. "Today we're going to be reading Lilly's Purple Plastic Purse, by Kevin Henkes," she said, turning a page.

Incarcerated mothers can't read to their children at night in a cozy bedroom or curled up on the couch. Occasionally they can read a book together during family visits. Sometimes that happens in this room with cinderblock walls, but today's is a solo performance, with only a digital recorder to catch the sound.

"A lot of [the women] have had experiences reading to their children before they came here, and they want that connection," said Crain. "One of the most fundamental things parents do with their children is reading and storytelling, and for these moms, that's been interrupted."

Crain helps them continue their reading relationships by facilitating these recording sessions. When an inmate finishes reading, Crain burns the recording onto a CD to send to the child, along with a brand-new copy of the book, provided by the Children's Literacy Foundation. This year, the Waterbury-based nonprofit chose CRCF as one of two prisons to receive a $25,000 grant aimed at encouraging a love of books among children of incarcerated parents. The other grant is going to a men's prison in Concord, N.H.

"It's an honor to work with these mothers," said Crain. "There's a need. I can't imagine not doing it."

Crain, 50, started volunteering at CRCF four years ago, after reading A World Apart: Women, Prison and Life Behind Bars and Orange Is the New Black. She wanted to do something to pop her "privileged bubble," so the mother of two called the Lund Family Center's Kids-A-Part program.

Kids-A-Part focuses on strengthening the bonds between incarcerated parents and their children under the age of 18. Typically about half of the 140 or so inmates are enrolled in the program at CRCF, Vermont's only facility housing female prisoners.

Modeled after similar initiatives at prisons around the country, the storybook-recording program started when Vermont's female prisoners were housed at the now-shuttered Dale Correctional Facility in Waterbury. It died in 2009, though, when the women moved to Swanton. Two years later, the Department of Corrections moved the inmates yet again, this time to South Burlington.

The Kids-A-Part staff tasked Crain, a librarian at Saint Michael's College, with resurrecting it.

Crain now visits the prison one Sunday morning a month, shuffling through security alongside the volunteers who run weekly church services. She sets up shop in the Kids-A-Part wing, which is an oasis in CRCF's bleak, institutional setting. Children's handprints decorate the cinderblock walls there, alongside colorful motivational posters, tapestries and photographs of inmates' children. One poster reads: "There is no way to be a perfect mother, and a million ways to be a good one."

Crain's efforts are getting a big boost this year from the $25,000 CLiF grant. The combination of monetary and in-kind support includes a library for the visiting rooms, seminars to help parents gain more confidence in reading to their children, and free books for kids.

Reading aloud to kids is "absolutely essential" for their success, according to CLiF founder Duncan McDougall. "I truly believe, as long as a child is safe, happy and loved, there is nothing we can do that is more powerful than sharing books with children," he said. Reading with a kid can double that child's vocabulary and help them develop longer attention spans. Encouraging reading is especially important during the first five years of a child's life, when the brain is making the most significant leaps in development.

And it's even more important for children of incarcerated parents. Jennifer Sprafke, assistant superintendent at CRCF, noted that "kids whose mothers are in jail are more likely to be involved with the criminal justice system." Those kids are often facing difficult childhoods, in some cases involving trauma, homelessness or other stresses, she said. For these kids, reading can be a luxury.

"A [Department for Children and Families] caseworker is going to care more that you're feeding your child more than they're going to care about books in the home," she said.

But storybook-recording programs don't just help kids. According to the Prison Policy Initiative, 40 percent of the U.S. prison population is functionally illiterate — meaning they would be unable to write a letter explaining a billing error. More than 70 percent can't read above a fourth-grade level. Studies show that intergenerational literacy programs aimed at inmates improve children's performance in school and raise parents' reading test scores.

Sprafke noted an added benefit of book-giveaways or storybook recordings: Many of the mothers at CRCF are desperately afraid of losing their children, she said. They want to be able to provide for them, even from behind bars. Some will crochet gifts, others will send little presents selected from the prison-approved commissary — candy or treats. But the chance to share a book, a brand-new one, is something special.

"It gives [the inmates] a chance to still feel like a parent," she said.

Kids-A-Part case manager Kell offered a similar assessment: "Their faces brighten up [when] they come to the bookshelf to pick out a book. It's sending a little bit of themselves home."

The women who participate in CRCF's storybook program work with Kell ahead of time to select the book they'll record. Kell is careful to make sure the themes and content are suitable for the children; a classic like Are You My Mother? isn't appropriate, she pointed out, when a mother might be absent from a child's life. Instead, many mothers gravitate toward books they remember from their own childhoods.

At the recent Sunday morning storybook session, one mom chose the classic Goodnight Moon to read to her 2-year-old, the youngest of her six children. She remembered buying and reading the same book to her oldest son, who is 23, more than two decades ago.

The recording sessions are often emotional, Crain said. It can be a painful reminder for the women that they're missing out on reading to their children each night. Some choke up during recordings and then start over from the beginning; they want the voice their children hear to be upbeat and confident. "They want to make it a positive, reassuring experience," said Crain.

That was the case for the mother of a 7-year-old boy, who'd chosen a Curious George story to record — one with sports, she explained, because he's an active boy: "He's a little monkey himself."

When she stumbled in the recording, she corrected a word and kept moving. "This way he knows it's OK to make little minor mistakes when you're reading," she said afterward, listening to the recording with Crain. "Mommy does it, too."

In thick permanent marker, she scrawled a note to her son on the envelope that would carry the CD and book out of the prison and into his hands. "I'm trying to use little words, because he's just learning how to read," she said.

The note read: "I love you. I miss you so much. Look inside for a treat. Listen to me read a book to you."