Heads in the Game: Will a Switch From Tackle to Flag Save Youth Football in Vermont?

On a humid August evening, around two dozen boys and two girls ages 6 to 14 assembled on a field at Bayside Park in Colchester for a preseason practice of the Colchester Catamounts coed youth football program. Longtime coach Glenn Cummings called a pair of eighth graders to the front of the group to lead them in jumping jacks and other warm-up exercises, while the other players counted along in unison.

Cummings approached a small, quiet first grader and gave the boy his first lesson in football's culture of toughness.

"Noah, football players have voices that are deep and loud," he said. "Can I hear your big-boy voice?"

The eighth graders continued barking out warm-up drills, and the players counted just as loudly. Two Castleton University football players, who both rose through the Catamounts' ranks, watched from the sidelines with arms crossed. One, Cummings' son, Grant, is senior captain of the Castleton Spartans football team.

In the Northern Vermont Youth Football League, the state's largest independent league, with 17 teams, Cummings is an institution. Not only did he build the Catamounts' equipment shed and convince the town to reserve this practice field for football, he was also the league's longest serving president. During his nine-year tenure, which ended in 2016, the league adopted the rules of USA Football, the amateur youth sport's governing body. Those rules require that all coaches complete criminal background checks and get certified in USA Football's Heads Up Football training program for concussion prevention and safer tackling and blocking.

Cummings is trying to keep these kids playing the game for as long as possible. But his toughest opponent may not be one his team will face on the gridiron. In recent years, football itself has been blitzed by a growing body of research linking repeated blows to the head — the kind endemic to football and other full-contact sports — with permanent brain damage.

Concerns about concussions have contributed to declining youth enrollment in tackle football programs, in Vermont and elsewhere. "The kids aren't playing because their parents aren't letting them play," Cummings asserted. His league's ranks dropped from about 2,000 players 12 years ago to about 1,200 today. Vermont, he said, is now 49th in the country for youth participation in football and is rapidly losing players and programs.

Youth football's decline in Vermont reflects a national trend, in which participation in tackle football by kids ages 6 to 14 fell from about 4 million kids nine years ago to about 3 million today, according to data from the National Sporting Goods Association. Case in point: South Burlington and Burlington high schools have merged their football programs due to dwindling numbers of players.

For safety reasons, the Northern Vermont Youth Football League no longer allows "old-school" training drills, such as "bull in the ring," in which one player runs inside a circle of teammates, while one or more players rush in and try to tackle him or her, Cummings explained. The league has also reduced or eliminated high-injury plays such as kickoff and punt returns, where rapid, head-on collisions are more likely. For K-6 programs, teams kick off only at the beginning of each half. When one team scores a touchdown, the opposing team starts at its own 25-yard line.

Growing concerns about concussions have also prompted many public schools, community recreational programs and independent leagues to switch from tackle to flag football at the elementary and middle school level.

In February 2017, the Vermont Principals' Association, an organization that oversees school sports, issued a directive to all of its 300 member schools: Beginning in the fall of 2017, all school-sponsored fifth- and sixth-grade football programs in Vermont had to switch from tackle to so-called padded-flag football.

The rules of padded flag aren't very different from tackle, in that players still suit up in helmets, shoulder pads and padded pants. However, defenders must grab a flag on the ball carrier's waist rather than tackling or pushing the player out of bounds.

This fall, the padded-flag mandate will extend to all of Vermont's school-sponsored middle-school programs at the seventh- and eighth-grade levels, regardless of whether those programs are run by the schools themselves or, more commonly, by community rec departments.

Other football programs around Vermont have followed the VPA's lead. Earlier this year, Burlington Parks, Recreation & Waterfront adopted flag football for all three of its divisions (grades 2 through 8) starting this fall. However, some independent leagues, including the one in which the Colchester Catamounts play, are sticking with traditional tackle rules.

Cummings said he isn't personally opposed to flag football — his league uses it from kindergarten through fourth grade — but he believes that if his middle school teams switched to flag, "I would lose my players. They would go play for other teams."

That assertion is backed up by Aimee Sheltra of Milton, mom to 10-year-old Mason. After the Milton Broncos switched from tackle to flag, she signed her son up with the Colchester Catamounts instead.

"Mason couldn't wait to get out of flag," Sheltra explained. "They're eventually going to tackle when they get to high school, so I'd rather he learns now."

Michelle Mayo of Colchester agreed. Her sixth-grade son, Hunter, started playing tackle football last year. Mayo said the VPA's directive was a bad call because she thinks kids won't be prepared for the rigors of tackle when they reach high school. As she put it, "If he's going to play, I'd rather it be real football."

Bob Johnson, the VPA's associate executive director who supervises all middle school and high school sports, said he's heard such criticisms before and noted that the decision wasn't reached lightly. The VPA started looking at this issue three years ago to address the shrinking number of kids playing football throughout Vermont, he explained.

Much of that decline, the VPA discovered after conferring with coaches and other athletic professionals around the state, was attributable to the concerns of parents and healthcare professionals about the effects of repeated blows to the head on children and teens' developing brains.

"They all agreed that we've got to do something different," Johnson said, "or we're going to lose this sport."

As recently as five years ago, brain researchers assumed that CTE took years, even decades, to develop and occurred only in athletes who had suffered numerous concussions as well as sub-concussive events, or blows to the head not serious enough to take players out of the game.

However, more recent — albeit preliminary — research now suggests that the early stages of CTE and other brain anomalies may begin in athletes at the college and even high school levels.

In 2016, researchers at Wake Forest School of Medicine published a study in the journal Radiology that found "measurable brain changes in children after a single season of playing youth football, even without a concussion diagnosis." Players studied were between the ages of 8 and 13.

No one has suggested that football is unique in posing such risks. Other team sports, including gymnastics, ice hockey, soccer, lacrosse and cheerleading also have high rates of injuries, including concussions. Researchers at Purdue University, for example, have likened the force of heading a soccer ball to dropping a brick on one's head from two feet above it. But, as Johnson, of the Vermont Principals' Association, pointed out, "Football is the one under the spotlight right now."

One healthcare professional who spends a lot time thinking about head injuries is Alan Maynard, a certified athletic trainer, associate professor at the University of Vermont's College of Nursing and Health Sciences, and an expert on concussive injuries. Maynard educates local physicians, trainers and coaches on how to determine when it's safe for student athletes to return to play. He's also advocated before the legislature for better concussion awareness and training in Vermont's athletic programs.

Maynard wasn't directly involved in the VPA's decision but supports it, calling it "something that should have happened a long time ago."

Maynard won't go so far as to say that kids should never play tackle football. For one, he said, recent studies of youth football don't address whether observed changes in kids' brains occur in other contact sports as well. It's possible that the cumulative effects of sub-concussive blows are just as common in, say, girls' lacrosse, whose rate of in-game concussions equals that of tackle football, Maynard noted. Also unclear is how well young brains recover from such injuries over time.

"I don't know the answer. I don't think anyone does," Maynard said. But while the jury is still out, he advocates for erring on the side of caution. As he put it, "Having a safety-minded mentality is always a positive thing, especially with kids' brains." 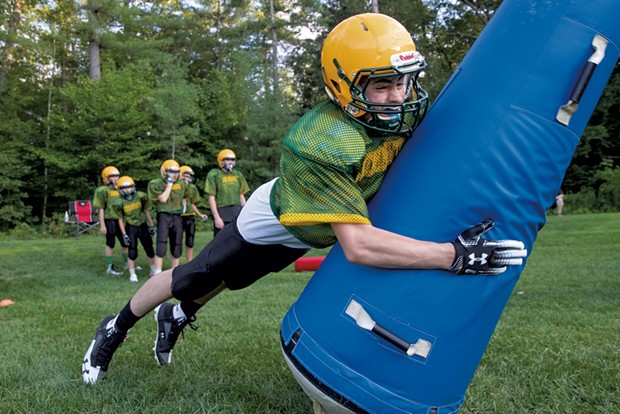 Some coaches and parents suggest that delaying kids' introduction to tackle rules will only increase their likelihood of getting hurt later on, especially because no high school teams in Vermont play padded flag.

"The main downside of flag football is it's going to create these bad habits for the players who hope to transition to tackle football in the future," said Don Demar, seventh and eighth grade head coach of the Fairfax Patriots, one of the Northern Vermont Youth Football League's member teams. Tackling and blocking are skills that take years to perfect, he added, and kids who learn too late "will have some catching up to do."

But Maynard pointed to one of Vermont's most successful football programs to counter that argument: Middlebury Union High School. Activities director Sean Farrell has been at Middlebury for 15 years — not including his time there as a student, when he played football for the Middlebury Tigers. Unlike many other communities, Middlebury's youth teams have been playing flag football up through eighth grade for decades, "and we have a fairly good success record at the high school level."

That's an understatement. In recent years, the Division I Tigers have almost always made the playoffs and are often strong contenders for a state championship. From 2013 to 2015, the team had a three-year undefeated run, with a record of 32-0, making the finals three years in a row.

"That was a group of kids who, when they were fifth and sixth graders, were small guys," Farrell pointed out. "If they'd played full-contact football, I don't know if they would have continued to play all the way through high school."

One advantage of flag football, Farrell explained, is that it can enable smaller players to be successful because the rules require running backs to focus on evading defenders "rather than just putting a shoulder down and running over people."

Farrell acknowledged that sometimes it takes freshmen players a few games to acclimate to tackle. But, he added, "In my 15 years here ... I can count the number of concussions we've had on one hand in [flag] football."

For his part, Maynard thinks that the athleticism and physicality of teams such as Middlebury's are proof that padded-flag football can produce players who are just as competitive and physical — while also reducing their exposure to concussions. Maynard's own 8-year-old son, Payton, who was named after Chicago Bears hall of fame running back Walter Payton, will play flag football for the first time this year.

"I love football," Maynard said. At the same time, he added, he's glad he'll have the "luxury of seven or eight more years" of brain research before he has to decide whether to allow his son to play tackle football in high school.

"I worry about parents who don't have that luxury," he added, "because football can be an important part of a young man's life."