Handmade Scavenger Hunts Get Families Outside 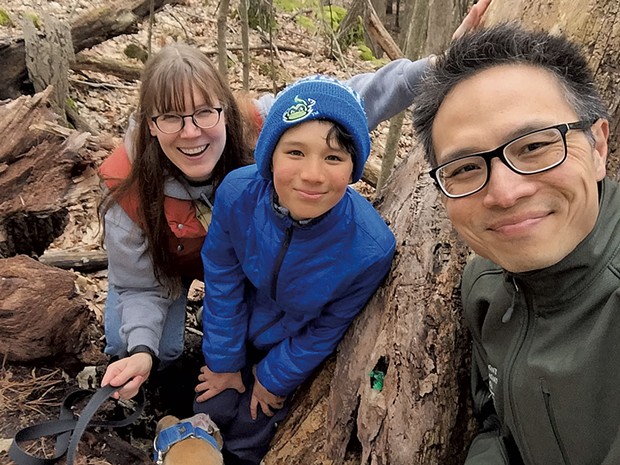 Scary and unfair as the pandemic may feel, the thing that has surprised me most is the sweetness that's arisen in response to it. People seem to have a lot of generosity and creativity pent up inside, just waiting to be unleashed. Here are two recent offerings I've encountered that provide families with a socially distant way to get outdoors, while still feeling like they're part of a community.

The first one is a whimsical homemade scavenger hunt created by my friend Dov Stucker and his children, 10-year-old Jillian and 6-year-old Sasha. There are nine maps, all drawn by Jillian, that lead to tiny plastic creatures they have hidden in the woods.

Before school closed, Jillian's fourth-grade class was learning how to read maps, and this project extends that learning. "She and I definitely work together to decide how hard to make each hunt and how to balance visual and word clues," said Stucker. "But the conception of each and the execution of the artwork is all her."

You can find these hunts at: sites.google.com/bsdvt.org/findthecreature-scavengerhunts. There are directions, hints and an email address where you can send your selfies once you find the creatures.

"For me, it hits all the notes," said Stucker. "It connects me and my family to the natural world, it has a spirit of play, it encourages other families to get out and explore, and it helps nurture community. Since we can't really gather to go on adventures with friends, it's been super meaningful for Jillian and Sasha to see that their buddies have enjoyed the same places and had similar experiences."

My family has already found a few monsters within the city limits of Burlington, one in the Arms Forest and one having a "bad hair day" in a tree. We've also searched for a creature on Derway Island, at the end of North Avenue. Though the current creatures are all in Chittenden County, this is something you could create for yourself and your friends wherever you are. 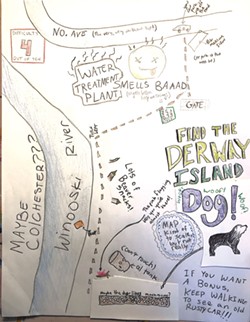 Here's a taste from my family's trip to Derway Island. With our trusty printed-out map in hand, "kind of to scale but not really," we started out by the "Water Treatment Plant. Smells Baaad." (Though we were encouraged that "It gets better. Keep walking!" — and it soon did.) We passed "lots of beaver snacks" — very fresh ones! — and paused to look out across the Winooski River at "Maybe Colchester???" At the pink flag and the rusty oil tank ("Don't touch"), we looked for the specified creature. At that point, we were advised, "If you want a bonus, keep walking to see an old rusty car!!!" We definitely wanted a bonus and were duly rewarded.

The hunt gave us a goal and inspired our tween. He's now talking about making up his own hunt for the "Salmon Hole Shark."

Along the way, my son wondered about various things:

We saw a lodge built right into the bank, and he asked, "Can beavers live in the banks of rivers instead of building lodges in ponds?" The short answer is yes; they build dams and lodges so they can stay in the water (they're clumsy on land) and have access to slender trees to eat. But, if they can find these conditions without building anything, they will happily take the path of least resistance.

We saw some flooded trees, and he wondered, "How can trees live when sometimes they are flooded and sometimes they are not?" Derway Island is full of floodplain forest, so the trees that grow there can withstand some seasonal flooding. My understanding is that the trees that thrive in floodplain forests have adaptations other species don't have, allowing oxygen to get to their roots even while they're flooded.

Most pressingly, he wanted to know, "Why is it called Derway Island, since it's a peninsula?" I asked Alicia Daniel, field naturalist for the City of Burlington, about this. She noted that it has not been an island since at least 1857, but she added, "I do wonder, knowing that the road has been improved out to Mayes Landing, whether it was inaccessible seasonally because of flooding and so was referred to as an island."

On this outing we also saw a beaver swimming in the river, climbed a slanted cottonwood, splashed through a wetland, and identified numerous birdsongs and calls with the help of my newfound love, a free nature app called Song Sleuth.

If you want to create your own hunt, Jillian offers this advice: "It's really important to get to know the place where you're making it, take a lot of notes and notice things that would make good landmarks."

Sasha says the hardest part is keeping the secret once you've made it up.

The Stuckers plan to add a new section to their website to post hunts that people send them.

The other sweet offering I've come across is Vermont Land Trust's Backyard Bingo, hand-drawn by ecologist Allaire Diamond. This bingo board sends you out to search for varied items, including "poop," a "deciduous leaf from last year" and "something you lost." It manages to be both simple enough for a toddler and interesting enough to capture the attention of a parent suffering from cabin fever. Once you've achieved bingo, you can share your photos via email or by posting on social media with the hashtag #StayGroundedVT.

As always, whenever it's above freezing, check for ticks, which are, as I heard someone say the other day, "no good at social distancing." And if you find yourself in Burlington near the Salmon Hole, keep an eye out for a tiny shark.