Going on a Frog Hunt: Turn Searching for Croakers Into a Springtime Ritual

May is a great month to look for frogs. For starters, they're making a lot of noise at this time of year. That's because now is when many species are trekking through the woods to the nearest body of water to mate and lay eggs. The males are calling out to females: "Here I am! Pick me!"

To go on a frog-hunting expedition, simply follow the sound. Even within the Burlington city limits, you'll find multiple species in wet places, such as the retention pond near Centennial Field, the boardwalk near Ethan Allen Homestead, and maybe even your own backyard.

Another technique, recommended by naturalist Erin Talmage, who has contributed more than 100 observations to the Vermont Reptile and Amphibian Atlas — which has gathered extensive data about our state's reptiles and amphibians — is to keep an eye out for cattails. Since cattails grow in wet areas, there will likely be frogs nearby.

You can also use the free iNaturalist app (or go to inaturalist.org) to find frogs near you. It allows you to search for locations where different species of plants, animals or fungi have been reported. If you post a photo of something you've found, an expert on the app will help you identify it. You don't even need to become a member unless you want to leave comments and suggest identifications.

Once you find frogs, what's next? I like to just sit and listen. The rest of my family enjoys mucking about and looking for more calling frogs, eggs and tadpoles. Consider boots or water shoes if you choose this option.

You'll usually find frog eggs in large gelatinous masses. I might jiggle the stick they are attached to, but I never take them out of the water. It's OK to pick up frogs and tadpoles with wet hands, though, as long as you're not wearing lotion or sunscreen. Frogs do much of their breathing through their skin, and residues on your skin can harm them. Also, don't bring home the critters you find. They do best in their native habitat.

Go back over the next few weeks or months to watch the tadpoles hatch and grow. You might notice that the numbers of eggs and tadpoles dwindle as weeks pass. To encourage your budding scientist's observation skills, sit and watch for a predator — perhaps a fish, bird or even an insect — to eat an egg or tadpole. It might even provide fodder for a discussion about life eating life.

Since the amphibious ruckus is all about mating — which frogs do by a method called external fertilization — it's also a good opportunity to talk about sperm and eggs. In the frogs' case, the females discharge eggs, then males spray sperm on them.

To figure out what species are in your pond, listen closely to their calls. My favorite online recordings of frog calls are on musicofnature.com, the website of naturalist and author Lang Elliot. Every frog makes a distinct call, and they are surprisingly easy and satisfying to learn.

Call of the Frogs 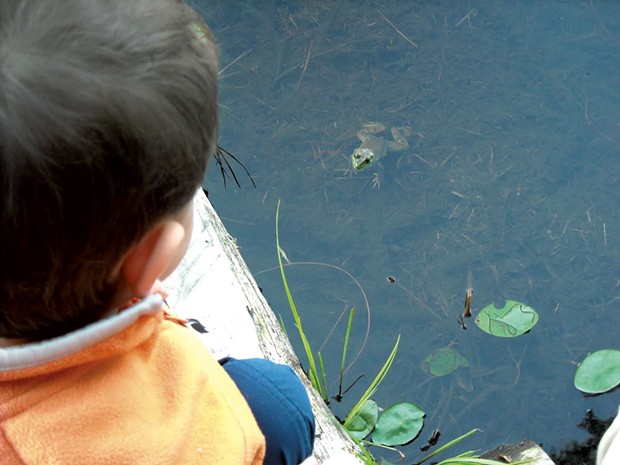 These are the most common frogs found in Vermont, listed in the approximate chronological order in which their calls peak. For more information, visit the Vermont Reptile and Amphibian Atlas at vtherpatlas.org.