Get Dog, Lose Dog: How Fostering a Puppy Gave a Boost to Our Family 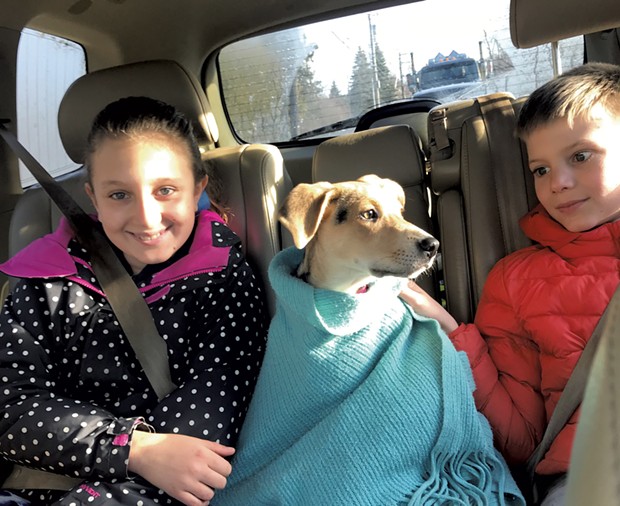 Through the years, my kids periodically asked my husband, Jeff, and I for a dog. It seemed like everyone we knew had one. As Mira and Theo got older, the prospect of having a furry companion seemed increasingly appealing.

A pup would give 8-year-old Theo something to do when he was bored, we thought. It would teach the kids responsibility. Mira, almost 11, could even walk a dog around our neighborhood by herself.

But I worried about dog hair everywhere, loud barking and having another creature to care for. There was also the matter of allergies. I had the sneaking suspicion that Theo might have inherited my cat allergy, and I wondered if he was allergic to dogs, too.

I also wondered if I was a "dog person." I'd seen others delight in the antics of animals, but I'd never felt naturally drawn to them. "Don't trust someone who doesn't like dogs," the saying goes. Maybe that someone was me.

There was just one way to find out. I filled out an application with Vermont Dog Rescue, a Hinesburg-based nonprofit that places dogs with both foster and adoptive families. I explained to its founder, Brigitte, that, initially, we were only interested in fostering. Jeff was skeptical. "Once we get the dog," he said, "it will become part of our family."

Brigitte sent us photos, and we settled on Terra, a 10-week-old German shepherd mix with a long, skinny face and floppy ears. She arrived in early March, a wisp of a creature and as jumpy and nippy as they come. I skirted off to take Theo to a birthday party, leaving Jeff and Mira to figure it out. Jeff texted me an hour later: "She's such a sweet dog."

"Really?!" I replied, a little worried that he had warmed up to her so quickly.

The week that followed reminded me a lot of having a human baby. Terra woke up in the middle of the night and early in the morning. She could only be left for a few hours at a time, which meant I had to work primarily from home. I pecked away on my laptop while Terra snoozed next to me. When I got up, she followed. The experience felt all-consuming, and not in a good way.

And Terra was still jumpy and mouthy. More than a few times, I caught Theo perched on the back of the couch, genuinely scared, yelling, "No!" as Terra tried to nip him, thinking it was a fun game.

Brigitte had told us that foster families typically keep dogs for seven to 10 days, but after a week, there were no prospective adopters in sight.

That's when something shifted. In spite of the time and energy we were investing in Terra — or maybe because of it — we started falling for her. She began sleeping through the night, and we started to see our housebreaking and crate-training efforts pay off. We experienced the deliciousness of stroking her soft, floppy ears. We delighted in the ridiculousness of her scooting around on her belly in the grass.

On rides to school, she'd sit between the kids, like a third sibling. When they got out of the car, she looked out the window longingly and cried. Occasionally, we took her on early-morning trail walks. After one of them, Theo was as perky as I've ever seen him at 8 a.m. "We should start every day like this!" he enthused.

We contemplated keeping her.

But I'd observed some eye redness and nose stuffiness in Theo, so before we made any decisions, I scheduled the earliest allergist appointment available, which was two weeks away. Brigitte agreed to hold off on finding an adoptive home for Terra.

When the day of the appointment came, the doctor confirmed my suspicion: Theo was allergic to a lot of things, including cats and, to a lesser degree, dogs.

For Jeff and me, the decision was made. We explained to the kids why we couldn't keep Terra. Theo seemed a bit relieved, and Mira was sad but understanding. That afternoon, Theo erased a note that Mira had written on a magnetic whiteboard on our fridge in the days before we got Terra that said, "Get dog." In its place, he scrawled, "Lose dog."

In the two and a half weeks it took to match Terra with her forever family, my own feelings swung wildly between guilt over giving her up, and relief that the experience was coming to an end. When potential adopters took Terra home to see if she would get along with their cat, then texted us the next morning to tell us they wanted to keep her, I felt simultaneously happy and sad.

We dutifully collected the textured balls, chewed-up stuffed animals and training treats we'd accumulated. The next day, we handed them off. We gave Terra a few final hugs, saw the sweet fenced-in backyard she'd get to run around in and left, with an open invitation to visit.

In the days afterward, we were overcome with an unexpected burst of energy and motivation. We worked together to declutter and organize the house, which had fallen into disarray during Terra's stay. I planned a surprise overnight trip to celebrate Jeff's birthday, thankful that we didn't have to worry about what to do with the pup. The weather started getting nicer and we began taking more family walks, which, it turns out, don't require a dog.

Ultimately, Terra gave our family a much-needed reset to our routine. She helped us gain an appreciation for everything that goes into having a four-legged friend. And she taught us that, though we may not be cut out to own a dog, we certainly have the capacity to love one.