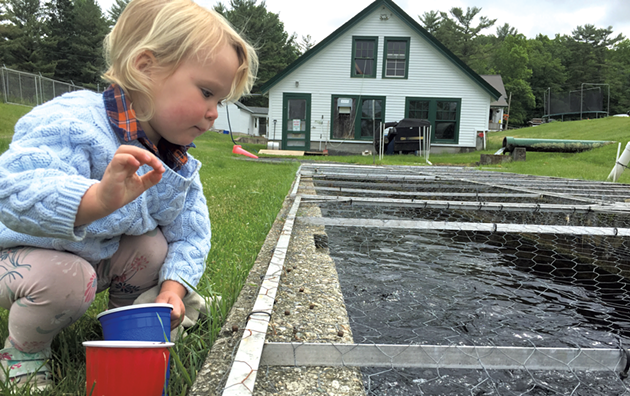 It was blustery and cold on the June day I decided to take my 2-year-old daughter, Joni, to the Salisbury Fish Culture Station. Not exactly what I'd envisioned when planning this summer outing, which included a visit to nearby Branbury State Park.

Fortunately, Joni loves an adventure. So, after getting pancakes at Middlebury Bagel and Deli (easily the best, and biggest, stack in our area), we pulled on our sweaters and headed south on Route 7.

I've driven past the fish hatchery on Route 53, on the way to Lake Dunmore, many times, but didn't know it was open to the public (seven days a week, 8 a.m.-3 p.m.). Nor did I know what goes on there.

The Vermont Fish & Wildlife Department raises millions of fish to release into the state's rivers and streams each spring. There are four other hatcheries in the state: Bennington, Grand Isle, Newark and Roxbury. Salisbury is home to the biggest fish; it's where they mate male and female trout, producing approximately five million eggs each year for the other hatcheries.

Four different trout species — brook, brown, rainbow and lake — live in a long, segmented trough that leads to a small pond behind the station, Cameron explained. I was relieved to see that the trough is covered in chicken wire; there was no way Joni (or her beloved stuffed pal, Sheepie) could fall in.

Fishmeal floats, so when we threw it in the water, swarms of thrashing, scaly fish rushed to the surface. Joni was delighted. "Pick up one!" she shouted with glee. I explained that would be tricky, and she tossed more fishmeal into the frenzy.

After about 45 minutes, we tootled up the road to the Kampersville General Store — the one with the two-story-high statue of a squirrel wearing an old-fashioned bathing costume outside.

Joni was more interested in what we found inside: a tank of tropical saltwater fish, some of which resembled characters from Finding Nemo. "Nemo!" Joni told me, breathlessly. "Dory!"

The clouds looked ominous, but I had promised Joni we'd try the new playground at Branbury State Park. So we continued down the road, paid the $4 entrance fee (for one adult; kids 3 and under are free) and braved the gusts coming off of Lake Dunmore.

The spiral slide has to be at least 20 feet high, but fearless Joni bounded up the stairs, then launched herself down. We slid and swung until her teeth started to chatter, then hopped back into the car and drove home, smelling of fishmeal and rain.