By At 4:30 a.m. on Christmas Day, 2005, Brenda and Craig Hamlin received a phone call from a local hospital informing them that Craig's daughter had just given birth to twins.

Most grandparents would be thrilled to receive such news. But the purpose of this call wasn't to congratulate the Hamlins; it was to ask whether the couple planned to assume custody of the newborns. If not, the caller advised, the twins — born three months prematurely, addicted to cocaine and weighing just 2 pounds each — would immediately become wards of the state and be placed in foster care.

For the Hamlins, who didn't even know Craig's daughter was pregnant, saying no was never an option. "What were we gonna do?" Craig asks. "I could never see someone else taking care of them."

So, on Christmas morning, the Hamlins drove to the hospital, where the babies' mother terminated her parental rights. At the time, the couple was already raising three other kids, including the twins' older brother, whom the couple had adopted six months earlier, a niece and their own daughter. "You don't think about it," Brenda says. "You just jump in with both feet."

Fast-forward eight years. It's shortly before 4 p.m. on a recent weekday when the twins, Zachary and Emily, now in second grade, get off the school bus and dash inside the Hamlins' Essex home. The siblings couldn't be more different: Zachary is tall, thin, dark-haired and taciturn; Emily is short, fair-skinned and bubbly. Both children have had physical and emotional problems due to being born prematurely to a drug-addicted mother who sought no prenatal care.

As Zachary flops sullenly onto the couch to watch TV with his older brother Dyllan, 13, Emily cheerfully climbs onto her grandpa's knees to cuddle. All four kids in the house call Craig "Dad," he says. "But they know the difference. Emmy, whose belly did you come from?"

Emily points to Brenda and smiles.

Craig, 57, is a heavyset man with a raspy voice and a round, kindly face that strongly resembles his granddaughter's. Seated at the kitchen table, he explains how years of working as a plumber wrecked his spine, forced him out of his job and left him disabled. As a result, Brenda, who's 56, does much of the housework and childrearing.

The Hamlins are part of a national trend: An increasing number of American children are now growing up with family members who are not their biological parents, an arrangement referred to as "kinship care." Experts say that grandparents — especially grandmothers — are the most common parental surrogates.

A 2012 report by the Annie E. Casey Foundation found that nationwide, more than 2.7 million children were being cared for by relatives or close family friends — an increase of almost 18 percent over the last decade. That report, titled "Stepping Up for Kids: What Government and Communities Should Do to Support Kinship Families," discovered that about one in 11 kids will live in kinship care at some point before the age of 18. The "vast majority" of those living arrangements are established informally within families rather than through a state foster-care system.

The Department for Children and Families confirms this trend in Vermont. Nearly 30 percent of children in DCF custody in December 2013 were placed with relatives, up from 16.9 percent in December 2010.

These percentages represent a significant number of kids; a 2012 report by Casey Family Services found that about 4,000 Vermont children, or about 3 percent of the state's youth, were being raised by non-parent relatives. That figure likely doesn't reflect the total number of relatives raising young kids without assuming legal custody or guardianship.

Wanda Audette, director of adoption services at Lund, the state's oldest and largest adoption agency, reports that 43 percent of all adoptions finalized statewide in 2013 were by kin — up from 29 percent in 2012. That number is only expected to rise, she says.

Why are biological parents unable to raise their own offspring? Substance abuse, incarceration, mental illness or parental neglect may account for a parent's absence. Less common reasons are military deployment, divorce, deportation, out-of-state employment and death.

Now more than ever, kinship care is seen as the next best option. In the last five years, the Vermont Department for Children and Families has made it a priority, whenever feasible, to place children with relatives before considering other avenues of foster care. It not only saves taxpayers money — about $35,000 a year per child, Audette notes — but results in better outcomes. Since kids tend to feel more comfortable with relatives than strangers, they're more likely to stay in the home, finish school and remain in contact with siblings and other family members. 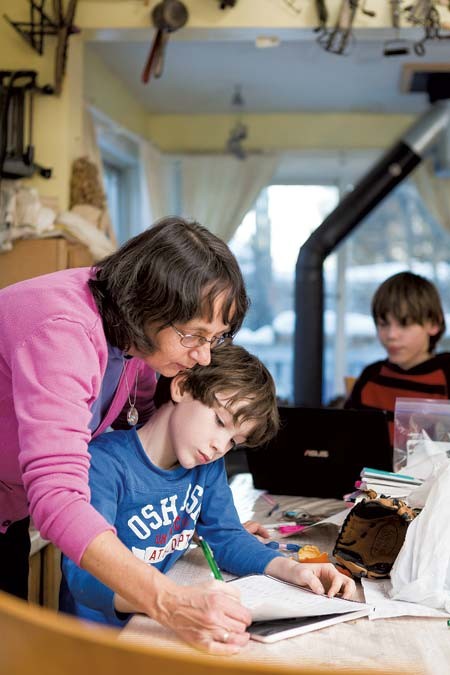 Childrearing presents unique challenges for those doing it the second time around. "Parents" in their sixties, seventies or even eighties may be up against declining health — either theirs or a spouse's — or have limited financial resources. They may have difficulty fitting in with a younger generation of parents. Raising kids can also strain relationships with spouses, children and other grandchildren who may feel jealous or resentful of the new family arrangement.

To help her navigate this rocky terrain, Brenda Hamlin and three other grandmothers founded Vermont Kin as Parents, a Williston nonprofit that serves as a resource for extended family members raising their non-biological children. The nine-year-old organization runs a number of support groups throughout the state, including the one in Milton that has helped Hamlin and others who have had young kids dropped in their laps without warning.

One of the group's founders, Lynn Granger, serves as its executive director. She says she typically meets people in the "eggshell days," when a grandchild, niece or grandnephew first arrives. She hears many of the same questions and concerns: How do I register my grandchild for school? Are there financial resources available for people like me? What are my legal rights and responsibilities? And how do I raise this child without ruining my marriage — or my sanity?

Granger, a grandparent herself who was 52 when her 2-year-old grandson came to live with her, says that one of her first bits of advice is to formally establish custodial rights. That's not always necessary, especially if the living arrangement is temporary: the biological parent has a brief incarceration, for example, or is fully committed to a substance-abuse treatment program and likely to return to parenting.

However, Granger says those cases are rare. More commonly, if the child is expected to live with the relative for more than two months, she says, it's "absolutely necessary" to establish legal guardianship. Such arrangements are essential for enrolling kids in school, bringing them to a doctor, accessing medical records and caseworkers' files, and obtaining health insurance and financial assistance.

Granger also tells grandparents and other relatives to "document everything" as objectively as possible, especially when dealing with government officials, police, social workers, guidance counselors and school administrators. The same goes for dealing with the child's biological parents, she says, especially when those relationships are rocky and custody matters remain in limbo.

Granger, who often lobbies in Montpelier, describes Vermont as "middle of the road" when it comes to the resources available to parenting kin. Though Vermont offers some financial assistance to parenting grandparents, some other states have "kinship navigators" who can help relatives through the system, find senior housing specifically devoted to grandparents raising kids, and assist with legal guardianship and adoption matters. She'd like to see the state do more to help grandparents who are stepping up to fill this unexpected role.

Hamlin's husband, Craig, isn't holding his breath. "I'll take care of those kids, whether I can see them or not," says the grandfather who is losing his eyesight as a result of diabetes. "Other people might say, 'Geez, how can you do that?' But I'm not looking for any pats on the back to tell me how great I'm doing. I just love my kids."

Monique, a 70-year-old grandmother in Milton, first discovered Vermont Kin as Parents through her grandson's elementary school. The Québec native was 61 when her grown son and his new wife abandoned Monique's 9-year-old grandson; the boy's biological mother died when he was 4.

Monique — who asked that her last name not be used — says she came to the group with many apprehensions about becoming a full-time parent again, especially because her husband wasn't thrilled by the idea. Like other grandparents in her predicament, Monique and her husband postponed their retirement plans of traveling the country in an RV. And even though her grandson is now 18 — "a child in a man's body, who makes lots of mistakes," she laments — he still lives at home, which causes considerable friction between Monique and her husband of 52 years.

"The fears are always there. My fear is: We're older. What's going to happen to our grandson when we're not there?" she asks. "Is he going to be able to take care of himself? Where's he going to end up?"

Monique says that younger parents at her son's school treat her differently. She tries to mingle with them, but generational barriers often get in the way. "They try, but I don't feel like a part of the group because I'm the oldest one there, and there are things I can't do," she admits. "And I'm not part of all this computer stuff."

"Marilyn," a divorced grandmother from South Burlington who asked to remain anonymous, had just retired from IBM in Essex at age 63 when her 5-year-old grandson came to live with her. He finally moved out at age 18, when Marilyn turned 80. "I was just fortunate that my health held out," she says.

Marilyn, now 82, still regularly attends the Milton support group. "You do feel that difference" when you're around much younger parents, she explains. "They'll offer you a chair when everyone else is standing. You realize that they're treating you like an older person, which you are."

Marilyn adds that many of her friends weren't interested in doing things with kids while she was raising her grandson. Did it affect her friendships?

"I had friends who stuck by me. We found a way around it, but it wasn't the same," she admits. "They were off doing things I couldn't do because of obligations. Plus, you don't retire thinking you're going to raise another child. It gets expensive."

Like all the grandparents interviewed for this story, Marilyn emphasizes that there were plenty of upsides to rearing grandchildren herself: watching them grow up, spending more time with them and doing activities with them she didn't do with her own kids. Nonetheless, she feels she missed out on something.

"Just underneath it all, you've lost the role of the grandparent for these kids, which is sad," Marilyn says. "You look forward to taking your grandchild to a movie, to the circus, doing fun things like baking cookies. That's all gone. Now you're just doing the role of the parent all over again."