Exploring the Timeless Appeal of the Nation's Oldest Camp

If you loved summer camp, Matt Storey has got your number. Don't forget to ask about his.

Storey spent 15 summers as a camper and later a counselor at the all-boys' Camp Dudley, on the shores of Lake Champlain in Westport, N.Y. Five years ago, he became the camp's director. Today, the 40-year-old former camper lives there year-round — in the director's house across the street from camp — with his wife and three kids.

As the oldest continually operated summer camp in the United States, Camp Dudley has its share of traditions. For example: For more than a century it has counted its campers. Each new recruit is assigned a number that indicates where he fits in the continuum. Currently at 23,700, the tally will easily surpass 24,000 this summer. Storey rattles his number off without hesitation: It's 13,804. His dad is 8,804.

In the off-season Storey travels around the world speaking with parents about why they should send their kids to camp. Invariably, he meets fellow Dudley alums, who ask him what his number is, and proudly share theirs.

"The boys all know their number. They never forget it," Storey says. "It's this thing we all have that we connect with each other."

This quirky custom has a kind of cultlike appeal that may be hard to fathom for those who've never attended summer camp. But campers say it's a healthy bonding ritual for boys and young men — something that's in short supply in contemporary culture. In that respect, Camp Dudley fills a unique niche. It's a seemingly timeless place where boys learn from older group leaders and staff about loyalty, responsibility, sportsmanship and respect for others. Indeed, the camp's motto, engraved in large, bold letters above its open-air pavilion, says it all: "The Other Fellow First."

The motto's gender-specific nature is no accident. Camp Dudley, founded in 1885 by YMCA volunteer Sumner Dudley, has been a boys-only camp since day one, and that's unlikely to change.

"We feel the single-sex experience is really important, for boys to be boys and to not worry about the pressures of wearing the right thing and all that," Storey says. "All that social stuff is gone. It's a nonissue." The same, he adds, holds true at Dudley's sister camp in Vermont, the all-girls Camp Kiniya in Colchester.

In recent years, as summer camps have been moving toward ever-narrower specialization — camps for tae kwon do, cheerleading, Asian cooking, digital photography, coding and robotics — Dudley has bucked that trend. It thrives as a generalist camp aimed at developing athletic, creative and well-rounded boys. And it clings to many summer camp traditions that might seem quaint to some, including the military-like bugle calls of reveille each morning and taps at night.

Dudley emphasizes four general program areas: arts, athletics, spirituality and the outdoors. Boys aren't allowed to opt out of any activity, and each camper is assigned to a sports team. Kids compete on the athletic fields during the day, then perform on stage that night, acting in a skit, singing in a chorus or playing a musical instrument.

"No kid is excellent at everything, and no kid is awful at everything," Storey says. "So here the boys get the opportunity to try new things that they're not getting at home." 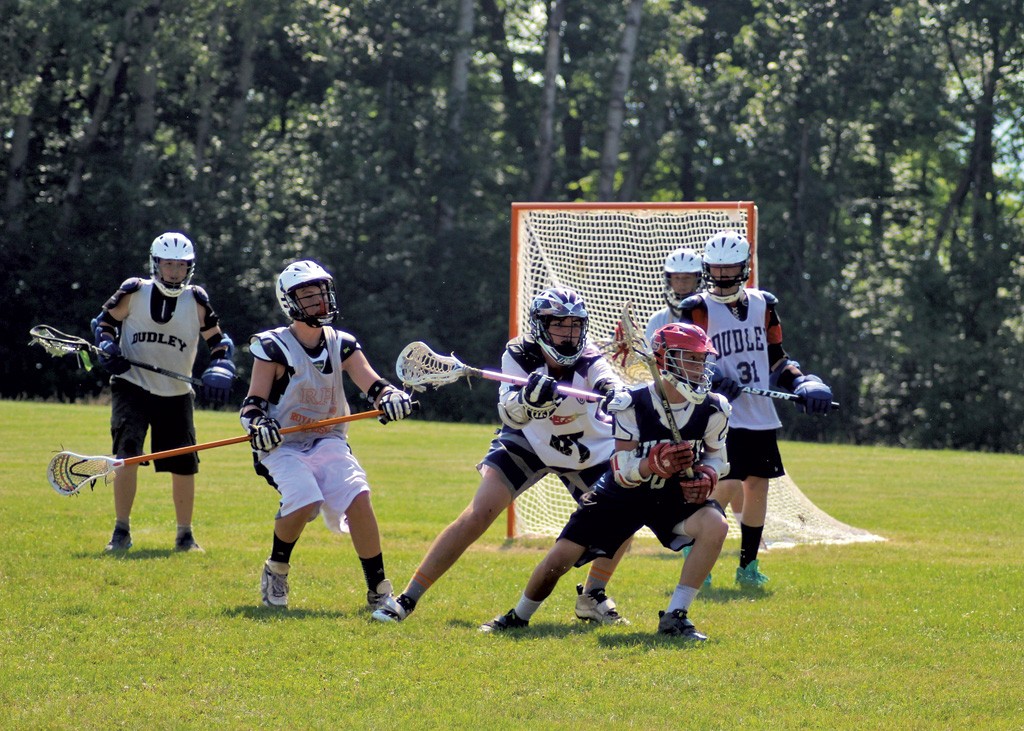 Dudley was originally founded as a Christian camp and still adheres to certain core Christian principles, but it's "not a church camp," Storey emphasizes. Boys of all religions, or none at all, attend. That said, every Sunday morning the entire camp gathers for a nondenominational outdoor chapel service along the lake. All the boys are expected to shower and dress up. Campers sing, engage in discussions and listen to a guest speaker — a pastor, college professor, coach or former politician. The goal, Storey says, is to set aside time each week for the boys to slow down and be introspective in a tranquil setting.

Camp Dudley also emphasizes leadership and mentoring. Typically, boys are campers for four years. When they turn 15, they can start a leadership-training program. Each cabin includes eight kids and three leaders: a 15-year-old aide, a 16- or 17-year-old assistant leader and a cabin leader who's 18 or older.

"Nearly all the aides and leaders came up through the ranks," Storey says. "They know the drill. Most were campers here, and they've been working toward this goal forever."

Storey fits that description. A native of Williamstown, Mass., he began attending camp at age 10 and estimates that he's spent about 75 percent of his life there. When asked what impact Camp Dudley has had on him, Storey is unequivocal.

"Camp is one of the most important influences on my life," he says. "My best friends today are guys I spent my summers with. And that was always the case."

Talk to other Camp Dudley alumni and you'll hear a similar refrain. Jake Rutter, a 41-year-old special educator at Frederick H. Tuttle Middle School in South Burlington, says he started attending Camp Dudley when he was "still in utero" and was there from 1984 to 1997. Rutter's number is 13,758. His father, 9,411, was a camper there, in 1959, as was his great-grandfather, whose number was 410.

Roughly half the campers each summer have some familial connection to Dudley or Kiniya. Storey's own 13-year-old son, Carter, attends Dudley; his daughters Ellie, 14, and Rachel, 11, likewise will return to Kiniya this summer. Many of Storey's staff members have been there for 25 years, and a few have been there for 40 years or longer. 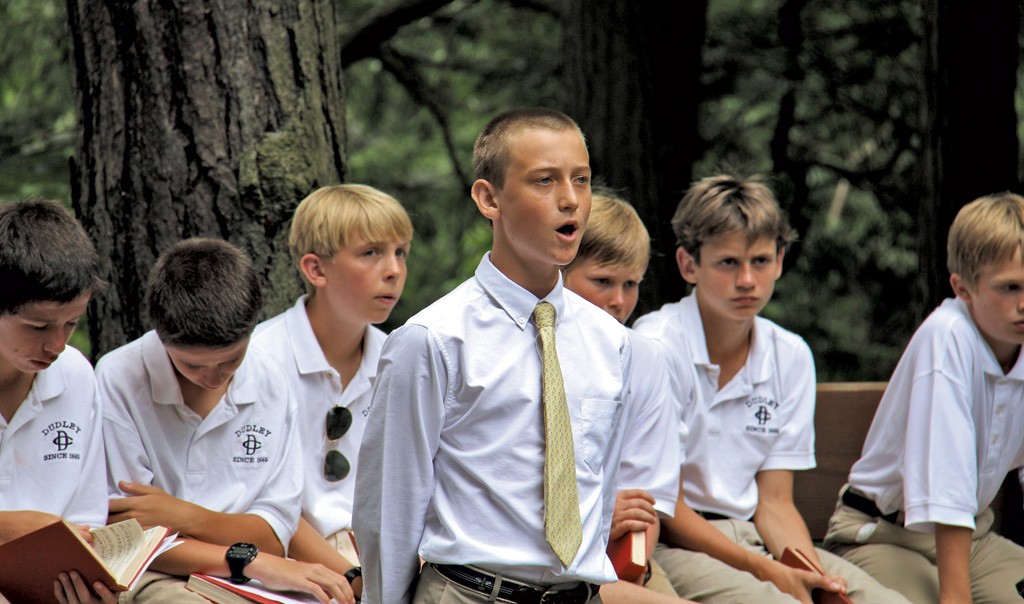 What is it about this place that instills such loyalty?

"It's the people," Rutter suggests. "The place is beautiful and the facilities are amazing. But it's the people who were my role models. My dad's friends? I idolized them. And I'm still friends with them ... Outside of my immediate family, camp is responsible for me being the person I am today."

Rutter says he was "blown away" when Storey, with whom he attended camp in the 1980s, was appointed director.

"Matt is a great friend and a wonderful leader," he says. "He sets the example for what all of us are going to get up and do for the day."

For his part, Storey says his aim since becoming director has been to create that same "magical community" he enjoyed when he was a camper. That's meant drawing talented staff from all over the world, some of whom have come up through the system but others of whom bring fresh blood into the community.

Last summer Camp Dudley drew campers from 33 U.S. states and 12 foreign countries, mostly through word of mouth. Dudley doesn't advertise or table at camp fairs, but it still sells out both of its three-and-a-half-week sessions each summer; occasionally, families are turned away.

Tuition isn't cheap —$5,100 for a single session, or $8,450 for the season. While its steep price tag and legacy system may sound elitist, Storey emphasizes that last year the nonprofit camp gave away $825,000 in scholarships. About 25 percent of campers received some financial assistance, whether it was "just enough to take the edge off" or full scholarships covering everything from room and board to transportation, clothing and camp trunks. The goal, he says, is to ensure a rich diversity of campers from all walks of life. 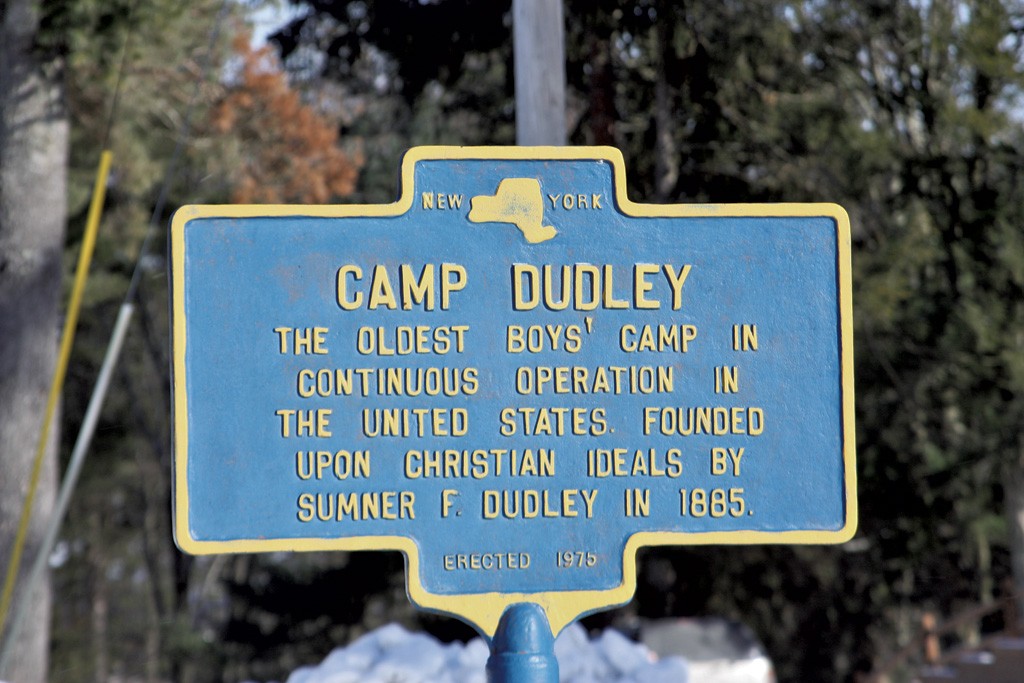 Still, Storey admits that Camp Dudley isn't the right fit for everyone. Who might not fit in? Someone who's interested in just one activity, he says, as well as the boy who's averse to trying new things, or leaving behind the comforts of home.

Camp Dudley enforces a strict no-fly zone for helicopter parents. Though boys are expected to write letters home to their parents each week, they're not allowed access to cellphones, computers, televisions or other electronic devices, except in emergencies.

"At first it's hard," Storey admits. "They struggle with it and don't want it. And their parents think they'll never make it. But eventually, it's a huge relief to these kids, to not worry about what they're missing, who called them and texted them. It's terrific."

There are exceptions to the screen rule. Last year, campers watched some of the World Cup soccer tournament on a large-screen TV. Additionally, the camp's art program includes digital photography and videography.

"We're not turning a blind eye to technology," Storey explains, "but we're not having it be a part of our daily lives, either."

Camp Dudley hasn't changed much since Storey was a camper. But as director, he has implemented some 21st-century improvements, such as solar panels on the roof of the dining hall and a local-food program. For years, Dudley contracted with a large, corporate food vendor. Now it does all its own cooking and baking, and bought $100,000 worth of local produce last summer.

"This was an awesome opportunity," he says. "When we buy corn, we buy a lot of corn. When we buy ground beef, we buy cows. We can really have an impact."

So how does a summer-camp director keep busy in February? He oversees a $5.5 million operating budget and more than 250 staff, including 20 year-round employees. Off-season, local youth groups have access to the playing fields on the grounds.

Storey says summers are actually the easiest and most enjoyable months of his year. "I pinch myself. This is where I get to come to work every day," he says. "I get to be in front of a community of 550 people who all want to be here and play and have fun. I get to ref a game and go swim with them. It's a dream job."

Get out your summer calendar — and your checkbook. If you haven't already signed your kids up for camp, it's time to start thinking about it. This story about the director of the nation's oldest summer camp, just across the lake in Westport, N.Y., should conjure up your camp spirit. Find a list of traditional day and sleepaway camps in the Camp Guide, and at the Kids VT Camp & School Fair on Saturday, February 7, from 10 a.m. to 2 p.m. at the Hilton Burlington.

The original print version of this article was headlined "Endless Summer"