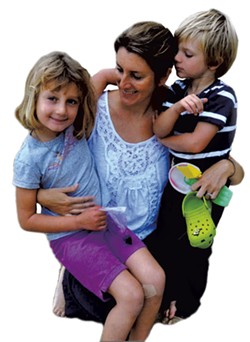 I remember the first time I solo-parented both of my kids. My son, Theo, was about five days old, and my daughter, Mira, was a few months shy of 3. My husband, Jeff, was taking some time off from his teaching job, but he asked me if it would be all right if he went to his school for the afternoon and evening to take part in some parent-teacher conferences. I thought it would be no big deal.

A couple of hours into his being gone, I realized I was wrong.

Both kids were crying inconsolably, and I had no idea what to do. I couldn't meet Theo's needs without ignoring Mira's, and vice versa. On the verge of tears, I called Jeff and told him that it was an emergency. He needed to come home. I remember the feeling of sweet relief when he walked in the door and, once again, I had another pair of hands to lighten the load.

It took me a while before I was ready to try that again.

Of course, I got used to it. But it took a lot of practice, just like learning any other new skill.

This event happened seven years ago, so I can laugh about it now. Contributor Grace Per Lee doesn't have the same luxury. With an infant and a toddler at home, she's right in the middle of this major adjustment. In her feature, "Bringing Home (Another) Baby," she reflects on the change in her family when her second son was born six months ago, and she speaks with fellow parents and experts about the experience of going from one kid to two. I've read Grace's piece over and over again and find myself tearing up each time. Read it for yourself (with a box of tissues nearby).

Our annual Baby & Maternity Issue also includes a profile of a mom and yoga teacher who is likely familiar to many of our readers — Susan Cline Lucey of Evolution Prenatal & Family Yoga Center. In "Heart Opener," contributor Katie Titterton finds out how Susan got started on her career path as a pre- and postnatal yoga teacher, childbirth educator, and doula, and asks local moms what makes Susan's classes so special.

There's more great stuff in these pages — a profile on young Broadway performer Oscar Williams, an inside look at Family Nights at the Davis Studio and "Parent Portrait," a beautiful photo and quotes from a Vermont parent-child pair inspired by Humans of New York. We plan to make that a regular feature.

You'll also find the last installment of our 2017 camp guide in the center of the issue. Get ready: Summer is just around the corner!