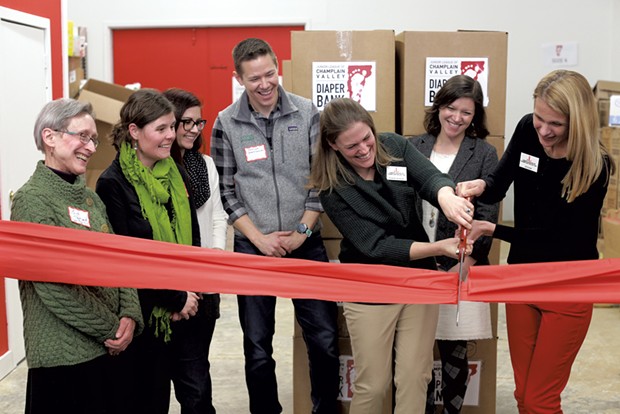 According to the National Diaper Bank Network, the average cost of diapering a child is $70 to $80 per month, a hefty expense for moms and dads trying to make ends meet. Consequently, one in three families in the U.S. struggles with diaper supply. To help meet this need in Chittenden County, the Junior League of Champlain Valley opened a Diaper Bank in March. The women's organization committed to volunteerism has partnered with the Chittenden Emergency Food Shelf — as well as food shelves in Williston, Richmond, Milton and Hinesburg — with the goal of distributing 100,000 diapers annually. Last winter, the league launched a three-month diaper drive and collected about 20,000 diapers for the Chittenden Emergency Food Shelf, said league president Jill Everett. As the drive was ending, Seventh Generation donated 46,000 additional diapers, which prompted members to begin looking for space to house all of those boxes. In June, they signed a lease for a space in South Burlington that includes a 700-square-foot warehouse and 750 square feet of meeting and work space. Donate diapers by dropping them off at Healthy Living Market & Café in South Burlington or the lobby of Kismet Place in Williston. Junior League members will then repackage donations into smaller parcels and deliver them to their five food bank partners. Another way to help? Make a digital donation through the Junior League's Amazon Wish List.

Learn more about the diaper bank and how to donate at jlcv.org/diaper-bank.