Dairy for Days: A Slice of Life at Enosburg Falls' Cow-Focused Festival

Milking a cow is harder than it looks. That was one of our takeaways from the 62nd annual Vermont Dairy Festival, which took place in Enosburg Falls in early June. The three-day fest included a kids' milking contest, in which contestants squeezed the udders of a life-size plastic cow by hand. The kids we talked to were surprised at the effort involved.

Indeed, dairy farming is a lot of work! And it's not just a job, it's a way of life for many in Vermont. In 2017, 2.8 billion pounds of milk were produced here, according to the United States Department of Agriculture.

No place in the state is as immersed in the dairy industry as Franklin County, in the northwest corner of the state. Franklin ties Addison County for milk production and has the most dairy cows of all counties in Vermont (35,736 according to "Milk Matters: The Role of Dairy in Vermont," a report on the results of a 2014 study commissioned by the Vermont Dairy Promotion Council).

The Dairy Festival began in 1956 as a town-wide social, said festival chair and Enosburg Falls Lions Club member Pierre Boudreau. As it grew, the Lions Club pitched in and the festival evolved into a celebration of dairy farming and its heritage in Vermont. The Lions Club, along with several local businesses, organizations, community leaders and volunteers, spends a good part of the year working to organize the event, the club's primary fundraiser. All proceeds fund community service projects.

The dairy industry has been struggling for the past few years. Low milk prices have caused some farmers to call it quits. In April, Seven Days reported that, according to the state's Agency of Agriculture, Food and Markets, 61 Vermont dairy farms had closed for business in the past year, leaving the state with just 749, down nearly one-third from a decade ago.

"In the 60 years I've been involved in the dairy industry here, I can't say I know when there haven't been challenges," Boudreau said of the recent news. "But the industry will survive them, and we will continue to celebrate it."

We spent the last day of the festival doing just that with our 7-year-old daughter, Sadie. After checking out the carnival rides, games and festival fare (giant caramel apples, potato chips fried to order, cheeseburgers, creemees and more), we met calves, chickens and a donkey, watched the milking contest, cheered on the young contestants in the Pedal Pull, and witnessed Cow Plop Bingo on Main Street. Here are some of the highlights.

Kids VT: Have you been to the fair before?

Angelus: Oh yeah, we come most every year!

KVT: What's your favorite part of the fair?

Briana: The car show. Or the rides! I like the Zipper the best.

Spencer: Cows! They're gonna give us the milk! 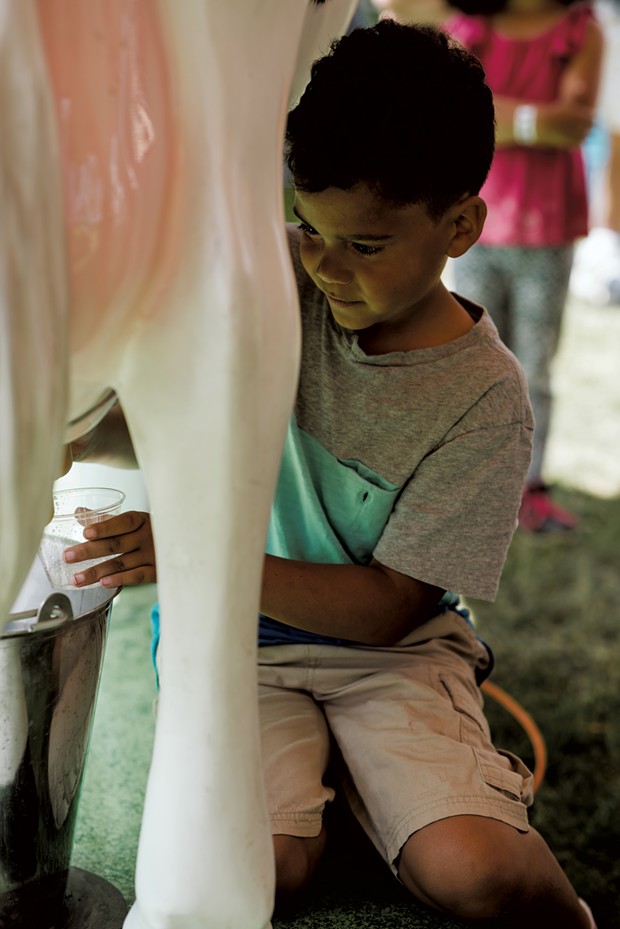 Kids VT: Is this your first time at the Dairy Festival?

Amani: Yeah, we just moved here this year, from Florida.

KVT: Wow, that's a long way! Have you ever milked a cow before?

Amani: Yeah, I did once in Florida. But it wasn't like this. This is a lot harder than I thought it would be!

This competition offered kids a chance to learn how cows were milked "in the olden days," before most dairy farms switched to milking machines. Kids divided into age groups and had one minute to get as much milk as they could from a life-size plastic cow with rubber udders. When kids seemed surprised at the muscle power they needed, the organizers asked them to imagine milking a whole barn full of dairy cows that way — twice a day! 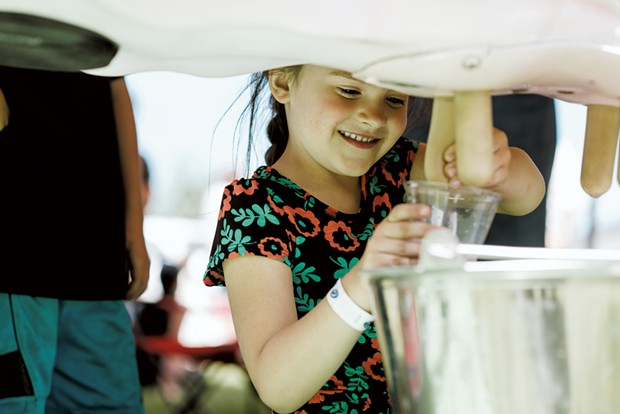 Kids VT: You looked pretty confident. How do you think you did?

Brielle: Good! It was easy. I know how to do it!

KVT: Is this your favorite part of the festival? 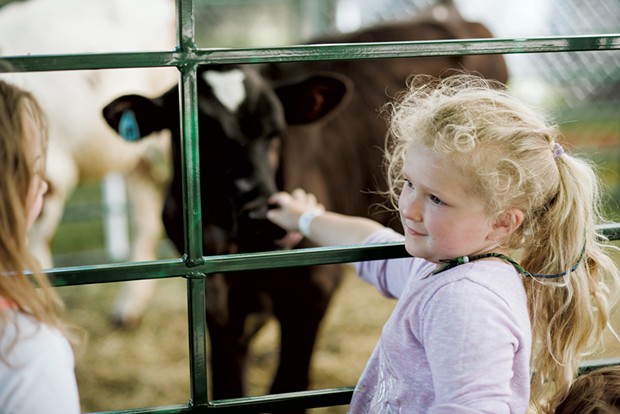 Kids VT: What's your favorite part of the Dairy Festival?

Maya: 'Cause I can hold them.

During this event, kids ages 4 to 12 pedaled a mini tractor dragging a sled with increasing amounts of weight. If a contestant pulled the tractor the entire length of the course, it was called a full pull. The kid who pulled the most weight the greatest distance for each age group won a trophy. Aliana Talcott was the winner for her age group and was proud of her trophy. 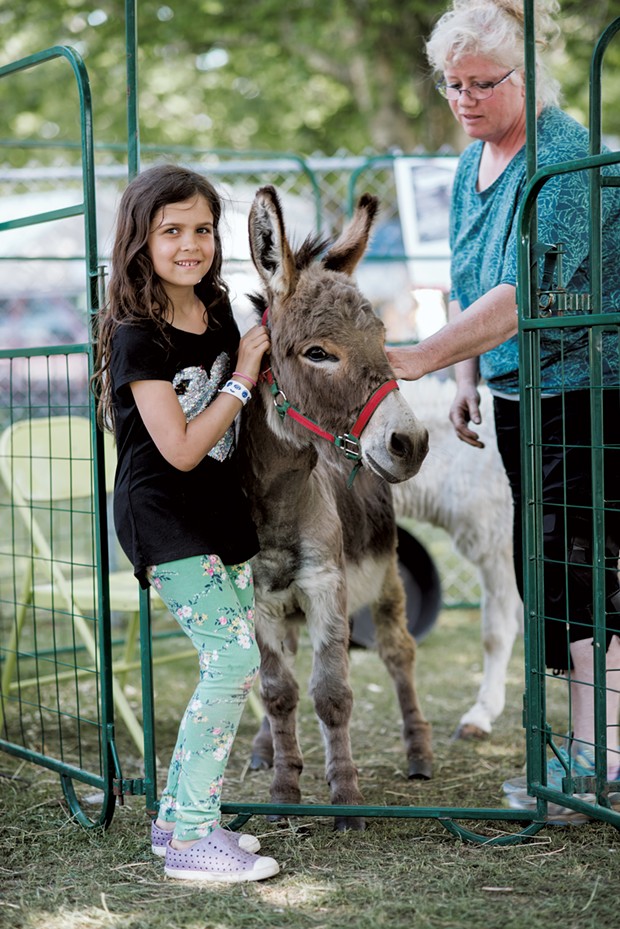 Sadie: I think we should get a donkey for a pet! Wait, can I have this donkey?

This was the culminating event of the festival. A large block of Main Street was roped off, and numbered squares were chalked onto the concrete to create a giant bingo board. As hopeful players lined the edges of the street, a trailer arrived carrying a large — and loud — dairy cow. Festival goers paid $5 per square, betting on the square where they thought the cow would, well, plop! The cow was led out of the trailer and onto the street, and the bettors made their best calf calls, hoping to lure the cow to their chosen square. Five winners took home $100 each.