Creating a Basement Playroom on a Budget 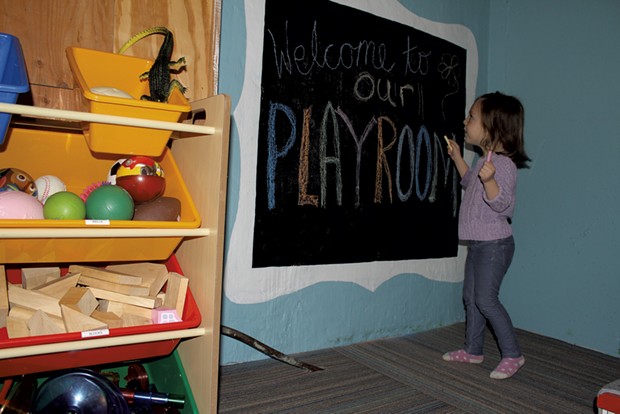 Spending extended time at home can feel less confining and more safe and serene if your space is comfortable and thoughtfully arranged. One Shelburne family finished a fortuitous basement remodel just weeks before the coronavirus pandemic prompted stay-at-home orders. It gave them a dynamic, multiuse playroom, organized storage space and streamlined laundry facilities.

The timing couldn't have been better. "Yes, thank God," said Antonia Hinge. She and her husband, Nick Hinge, are parents of 4-year-old Sophie and 3-year-old Theo. In early lockdown days, when it was still cold and snowy, they took full advantage of their new play space, where Sophie and Theo can snuggle into a beanbag chair in the reading nook under the stairs, try on red cowboy boots in the dress-up area, stock a mini grocery cart with wooden fruits and vegetables, and make music with the castanets, bongos and recorder in the music bin.

They usually run straight for the swing, a canvas pod — you can find it on Amazon — hanging in the middle of the room.

Antonia and Nick undertook the remodel last winter, and the transformation happened like a home makeover on TV: dramatic and fast. The "before" pictures show a basement with a concrete floor, concrete walls, and a washer and dryer at one end. Clutter fills the rest: bikes, fans, a window air conditioner, assorted furniture, a roasting pan, a slow cooker and boxes still unpacked from the family's move three years prior.

The "after" footage pans around a play space as bright and organized as a preschool. Though working full time, the Hinges managed to complete the project in under six weeks, coming in under their $5,000 budget.

Inspired? It's a project that could still be done, despite COVID-19 restrictions.

Keys to this family's success: purging quickly, doing much of the work themselves (Nick did the construction, and Antonia painted), reusing lumber and furnishings they already had, and enlisting help for the skills they lacked. 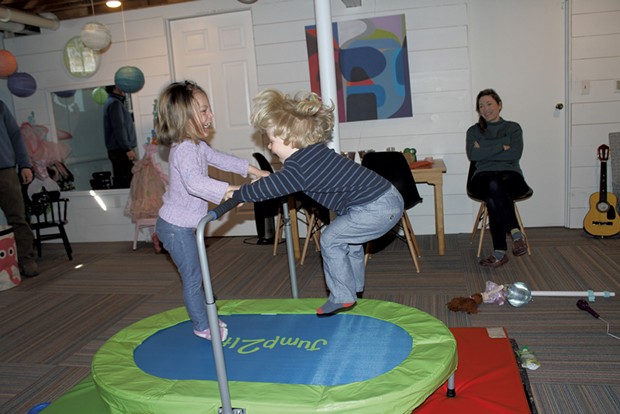 Nick credits his wife with driving the project. "She gets an idea; she runs with it," he said. She wanted a basement play space for the kids because their toys were taking over the main floor.

But the basement still needed to house laundry, storage and Nick's ski shop, where he stores and tunes his skis, and she didn't know where to start.

That's where Claire Mahoney and Marlene Simson came in. The pair own Moov Home & Moving Consultants in Richmond. "I found their help just invaluable," Antonia said, "because I knew I wanted this space. I just didn't know how to get it. Or how to do it. And they came down, and they just saw it." Mahoney and Simson are still working with clients. They wear masks in homes now and do walk-throughs and styling virtually, if clients prefer.

They recommended that Antonia and Nick create "intentional spaces," such as the reading nook and dress-up area. Children have them at school, said Mahoney, a former educator; it makes sense to continue the concept at home. She and Simson suggested carpet tiles for the playroom floor and faux shiplap, painted white, to enclose storage and utilities.

Step one: Clean out.

Antonia bought two shelving units and set aside things to keep. The family purged unwanted items, selling them on Craigslist, donating them to Goodwill, or passing them on to friends and family.

Instantly, the space looked bigger and felt like a blank canvas, Antonia said. Next, she entertained the kids on weekends to give Nick uninterrupted blocks of time to build walls. That was crucial, Nick said: "It's those fits and starts that make projects like this really hard."

Then the carpet went in. Simson and Mahoney recommended Milliken & Company carpet tiles, "which are really nice because they're commercial grade, so they're good for kids and pets," Antonia said. "And then if they totally destroy part of it, you can just pull up squares and then replace them." New England Floor Covering installed the carpet, which accounted for roughly half of the project budget.

Nick and Antonia gave Mahoney and Simson free rein to furnish the playroom. With a goal of keeping the space somewhat timeless, they picked two shades of blue for the walls and "Obstinate Orange" to make the stairs and railing pop. They suggested chalkboard paint for the wall at the base of the stairs, and Antonia went to work. 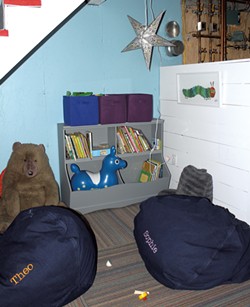 Some things are new; others came from consignment shops; and some — Antonia's stuffed bear, Nick's hobby horse, and a table and chairs painted by Nick's grandfather — have been in the family for generations. Even the children's baby monitors are back in service, mounted on the basement rafters to help Nick and Antonia keep tabs on the kids while they're playing.

The whole room was picked up and picture ready the Saturday morning that Sophie led a guest down the stairs, stopping in front of the chalkboard that said, "Welcome to our playroom."

"Ta-da!" she said. Then she turned to the chalkboard and said, "I'm gonna mess this up!"

She and Theo cycled through the swing, the tea set and the dress-up clothes — "There you go, bud," Antonia said, helping Theo into a red tulle dress. They sang "Happy Birthday" and "Let It Go." And they sat together in the swing, rhythmically tossing out toys.

Before they had the play space, Nick and Antonia walked around their main floor picking up toys every night after the kids went to bed. The first weekend after the basement was finished, the kids played down there while Nick and Antonia sat upstairs and drank coffee, uninterrupted, for 45 — 45! — minutes.

"And at the end of the day," Antonia said, "we can close the door and not care about the mess."