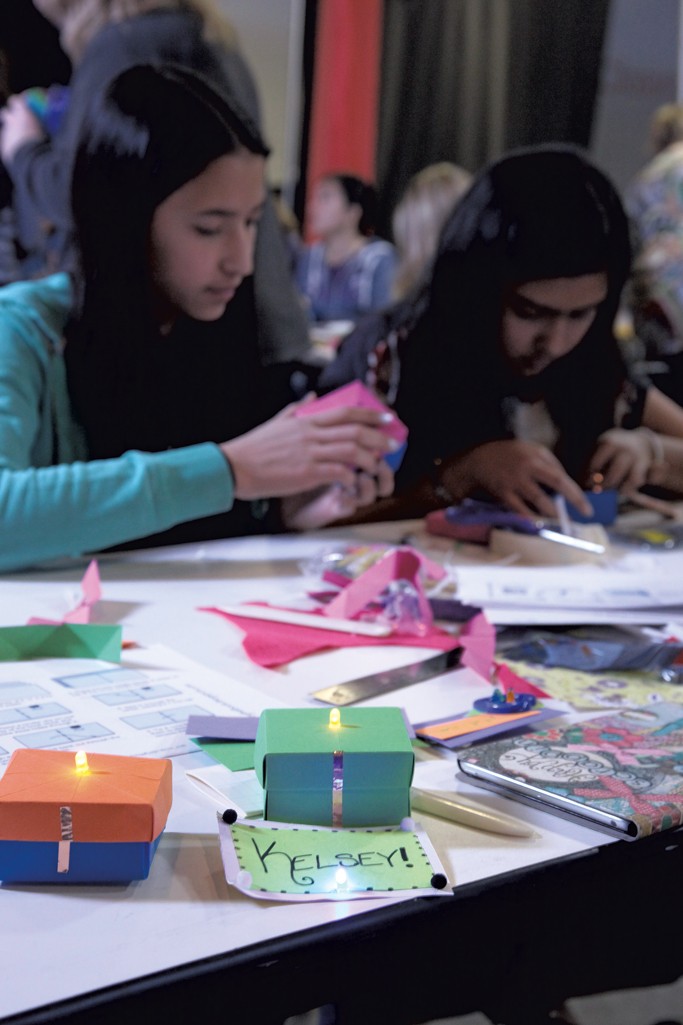 Harper Oliver and Sydney Sears had almost finished their origami boxes. All that remained were the finishing touches: LED lights and batteries.

The 10-year-old best friends from Browns River Middle School in Jericho participated in an all-girls circuitry workshop in Burlington last month. For one of their projects —  creating light-up boxes — the girls used copper tape and wire to affix small batteries to the bottom of their boxes and LED lights to the lids. When they closed the boxes, the conductive tape completed the circuit and the lights blinked on.

For the two of them, the hardest part was folding the paper box. "The circuitry," said Harper, "was easy."

Seven Vermont middle school teams — composed of two girls and one teacher — came out for the daylong Girls MAKE IT workshop at the Generator maker space in Memorial Auditorium. They built circuits, did basic coding and worked with thread that conducts electricity and other etextiles.

The girls started off the morning with a simple, open-ended project: jazzing up name tags with little lights. They clustered around three long craft tables piled high with colorful origami paper, candy-like LED bulbs, needles and thread, and spools of copper tape. Many of the participants were surprised by how easy — and fun — the projects turned out to be.

The workshop is the brainchild of Lucie deLaBruere, a longtime Vermont educator who has spent the past 18 months living out of a 1983 Blue Bird Wanderlodge bus with her husband, Craig Lyndes. While traveling the country, she coordinates tech-related educational events back in Vermont and teaches online courses for the University of Vermont and Marlboro College.

In 2001, as part of her capstone master's project at Marlboro, deLaBruere created Tech Savvy Girls, a project that encourages girls in Vermont to learn about coding, electronics and technology. Since then, she has kept the curriculum alive through summer camps, competitions, field trips to tech companies, leadership trainings and other programs aimed at deepening girls' interest in tech.

Girls MAKE IT is one of those programs. The middle schoolers at Generator seemed comfortable with circuitry; many of them had made circuits before in school clubs and summer camps. But girls historically stray from technology-based activities as they get older. "When they go to higher-level computer programming, they'll be one of just a few girls," said deLaBruere. To change that gender imbalance, she doesn't just want to introduce them to tech; she wants to get them hooked.

That's why deLaBruere also invited young role models to the event. Maxine Cook, a senior at Essex High School, joined the girls around a work table, showing off a blinged-out winter hat she'd recently created using conductive thread, a bunch of LEDs and an open-source kit for building electronics called an Arduino.

The girls in the workshop got simple, illustrated directions for each project, but completing them took a lot of tinkering and trial and error. Anne Pius, who provides tech support at Essex Middle School, helped her two seventh graders, Grace Hsiang and Maya Asher, curve their copper tape without wrinkling it. The workshop, she said, was "giving the girls space to follow instructions and figure it out on their own."

After finishing their boxes, the girls created little books that would fit inside them. They bound the books using needle and thread and decorated the covers with felt and embedded LEDs.

Kelsey Taylor, a seventh grader at St. Albans City School, said she was excited to go home and try out these projects with her siblings. "It's pretty cool to realize what I'm able to make," she said.