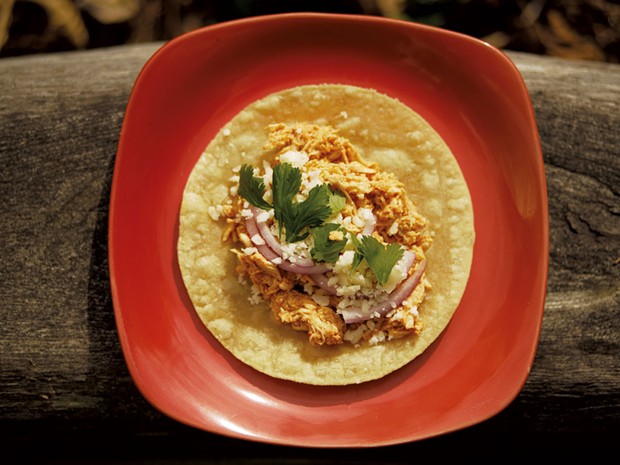 When summer arrives, I'm always looking to treat my family to fun food that doesn't take a lot of time to prepare, since we'd rather spend our time hiking and boating. Mexican food is a crowd pleaser in my house. My daughter, especially, is a big believer in tacos on Tuesday, or, really, any day of the week. If you are looking for a twist on this Mexican staple, I suggest trying a smoky, spicy tinga sauce.

Originally from the Mexican state of Puebla — the same region where the famously complicated mole sauce comes from — tinga sauce is much simpler. It's made with chipotle peppers in adobo sauce, which can be found canned in most grocery stores. Chipotles are dried, smoked jalapeño peppers; the adobo sauce they are packed in is a slightly sweet, tangy red sauce. If you want a milder dish, use fewer of the canned chipotle peppers and all of the adobo sauce.

I used chicken in this recipe, but you can also use pork, beef or even jackfruit as a vegan alternative. The key is to shred your meat (or substitute meat). One of my favorite tips for shredding cooked chicken is to use a stand mixer with a paddle attachment. It takes almost no time, and turns what could be a tedious task into a cinch.

I served the chicken tinga on warmed corn tortillas, topped with crumbled cotija cheese (which is like a Mexican feta, very mild and crumbly), sliced red onion and cilantro, for those who like it. As sides, we had a Mexican street corn-inspired salad and guacamole. If you have leftover meat, try using it as a filling for burritos or taquitos, as a nacho topping, or in sandwiches. It really packs a delightful, and unexpected, punch of flavor.