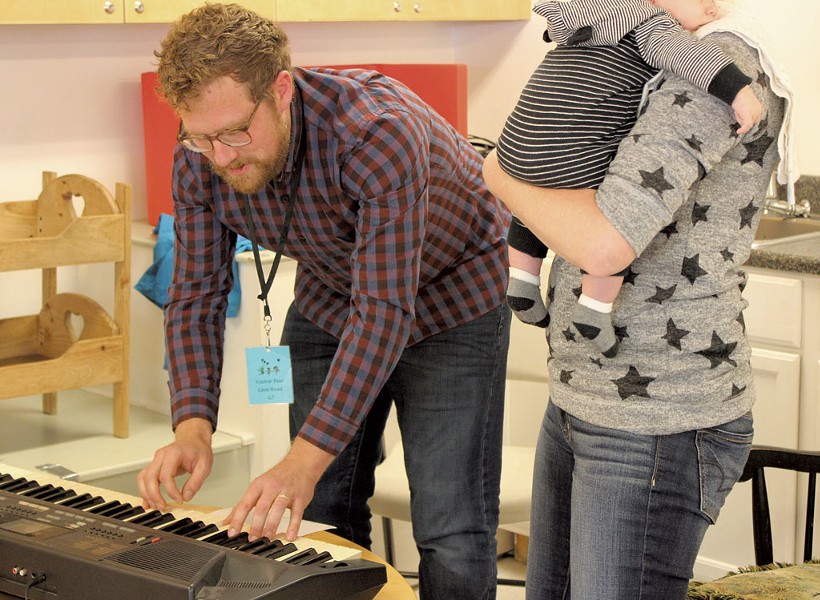 In a classroom at the Lund Family Center in Burlington, Lund resident and mom of three Julia* waded through the messy, nonlinear process of writing a song. Julia had already worked with instructors from Writers for Recovery to brainstorm ideas for lyrics to a lullaby for her children. Now it was time to put the words to music.

Helping her was Mary Bonhag, a soprano who has performed with the American Symphony Orchestra and is co-artistic director of Marshfield's Scrag Mountain Music. She asked Julia to sing the words she had so far.

"Don't laugh. I'm not a singer — other than in the shower," Julia told her, before reading in a soft, melodic voice from the lined paper on the table.

"Close your eyes, it's sleepy time. / Now it's time to rest your little baby breath. / You're so strong, so reach the sky. / Your baby blues will touch their souls."

"Oh, that's so beautiful," Bonhag said. "Let's sing it together."

The two joined voices, with Bonhag strumming along on a mandolin, stopping midway to make sure she got the words and rhythm right.

"It just popped in my head on the way back from daycare," Julia said. "I don't know where it came from."

The two women have been brought together by the Lullaby Project, a program of Carnegie Hall's Weill Music Institute that pairs professional musicians with pregnant women and new parents to write bedtime songs for their babies. Launched in 2011 at Jacobi Medical Center in the Bronx, the project now has partnerships with 10 sites in New York City and 30 more around the world — from Seoul, South Korea, to Lubbock, Texas. The project is rooted in the idea that creating, singing and sharing lullabies promotes maternal health, child development, and parent-child attachment.

Evan Premo, Bonhag's husband and codirector of Scrag Mountain Music — a Marshfield-based nonprofit that brings chamber music to Vermont communities — learned about the Lullaby Project years ago while doing a post-graduate fellowship at Carnegie Hall. This spring, he and Bonhag figured out a way to bring it to Vermont.

The three organizations officially agreed to collaborate, deciding to run the workshop during a preexisting playgroup time. It was a good fit because Lund is "always looking for innovative practices" that aid in recovery, said the 125-year-old nonprofit's communications and foundations coordinator Charlotte Blend.

The first two sessions were devoted to lyrics. O'Brien and Writers for Recovery cofounder Gary Lee Miller provided writing prompts that could be turned into lullabies. The six participants, some who came with their babies or toddlers in tow, completed seven-minute free-write sessions on topics like "Your mom is the person who..., " "I'll be there for you," and "What I hope for you."

"We don't want people to actually think too much," said O'Brien. "We just want the creative juices to flow."

O'Brien and Miller highlighted lines in each participants' work that they thought were particularly fitting for a song. The participants listened to recordings of other songs created by the Lullaby Project, while noting the various moods, styles and genres of music. And they read their own writing aloud and shared what they loved about each other's work.

On a Tuesday morning in mid-October, the third session of the Lullaby Project, Bonhag and Premo arrived to help parents set their words to music. The group sat in a circle on the playroom rug.

After a musical greeting — in which participants sang their own name and the name of their children — Bonhag checked in with the group. "How's it going?" she asked.

"It's nice to be able to just write without trying to rhyme," said Julia. "It's been helpful to have writers pick out things they think would make a good song."

Another mom, holding her baby son, expressed her apprehension about singing aloud. "I sing to him all the time," she said, "but I'm scared to sing with someone in front of me."

That's natural, the musicians reassured her.

Premo set up an electric keyboard in the playroom, while Bonhag moved to a downstairs classroom with a mandolin. Each participant had 20 minutes to work with one of the musicians, who made musical notations on the lyrics and recorded snippets of the song as they went.

An hour later, the participants came back together on the rug — amid fussy babies and a playing toddler — to share their progress. They'd have one more session to work on the music and another to finalize the arrangement with Bonhag and Premo, plus a harpist and a viola player.

Julia was first. "You've got to sing it with me," she said to Bonhag.

Bonhag agreed. "Do you want to say anything?" she asked.

"No, I would never," another mother said.

One stanza of Julia's song had changed slightly since she had first shared the lyrics that day.

"I've made mistakes, I know it's true. /But you're so strong so reach the sky," the new part read.

When Bonhag and Julia finished singing, the room broke into applause. One mom, cradling her 11-week-old son in her arms, had tears in her eyes.

Bonhag said Scrag Mountain Music hopes to find funding to continue the project at Lund and expand to other sites in Vermont. Participants will receive an audio recording of their finished lullaby but, from her perspective, the process of creating the song is where the real power of the project lies.

"Really this is about the mothers' experience and their growth and their confidence-building and the maternal bond with their babies increasing," Bonhag said. "The lullaby at the end is a happy byproduct."

Scrag Mountain Music will lead a community lullaby workshop, open to the public, at the Brown Public Library in Northfield on Tuesday, November 5 at 7 p.m.

Listen to other Lullaby Project songs at soundcloud.com/carnegiehalllullaby.