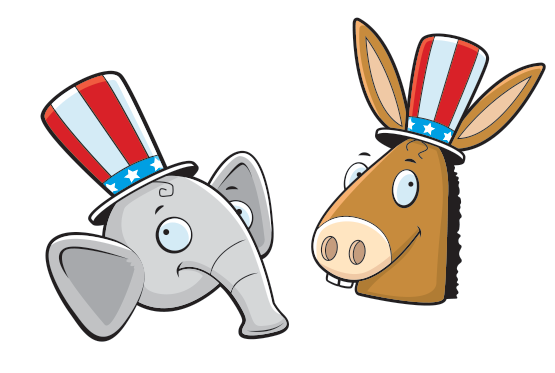 Growing up in suburban Detroit in the 1980s and '90s, it seemed to me that everyone was a Republican — my Catholic family, my friends, Alex P. Keaton. I figured I was conservative, too. I wasn't even sure what the other options were.

A desire to protect the environment and fight for women's rights eventually inspired me to break ranks. At 17, I volunteered for the Clinton-Gore campaign. My auto-worker uncle jokingly referred to me as "the Little Liberal" and "Cathy Rodham Resmer."

As a parent, I try to present all sides when talking politics with Graham, 10, and Ivy, 7. I want them to be engaged in the democratic process, to ask questions, to figure out for themselves what they believe and where they stand.

That's why, the night before the Iowa caucuses, I suggested that the four of us — the kids, me and my partner, Ann-Elise — sit down in front of our flat-screen and learn about the candidates. Using our Apple TV, we visited several of their YouTube channels for an educational and entertaining "movie night."

We started with a familiar face: Sen. Bernie Sanders.

Naturally, the kids know about our socialist senator. Graham met Sanders once at a climate-change rally. They've heard his pitch about income inequality, so we watched just one video on his YouTube channel — an emotional montage of huge crowds of Sanders' supporters backed by the Simon & Garfunkel song "America." Both patriotic and progressive, it was a big hit. Ann-Elise was so inspired that she reached for her phone and said, "I'm giving him more money right now." I sighed.

Ivy decided that she was supporting Sanders, too. "You haven't seen any other candidates yet!" I protested, and switched to the Hillary Clinton channel. We watched "Dorothy," an ad in which Clinton describes her mother's difficult childhood, which motivated Hillary to enter politics.

But it was a video of Bill Clinton speaking on Hillary's behalf that resonated with us. In it, the former president says of his wife, "She made everything she ever touched better." Even Ann-Elise agreed that Bill made her sound appealing. Graham declared: "I'd vote for that kindly grandmother."

"Not so fast," I said, pulling up the leading Republican candidate's channel. The kids had already heard about Donald Trump during his Burlington visit and were not impressed. As students at Winooski's JFK Elementary School, they have many Muslim friends and have a hard time understanding why someone would want to keep Marissa and Khadija out of the country.

"Get the Trump out!" said Ivy — quoting a sign she'd seen in photos from the Burlington protests — as I queued up the first TV ad he released. It cuts from photos of President Obama and Hillary Clinton to images of the San Bernadino shooters, then shows photos of armed men wearing masks. A menacing voice promises that Donald Trump will "quickly cut the head off ISIS."

We've talked with the kids about terrorism, and the situation in Syria, so they had a vague idea what it was about. "How do you think he wants you to feel after seeing this ad?" I asked them when it was over. "Scared," Graham replied.

But they weren't frightened. Ivy came up with a nickname for the Donald — "Dumb Old Trump."

Next we checked out some of Sen. Ted Cruz's videos, including one where he reveals that his mother was a computer programmer. I thought that might spark the kids' interest, since my mom was once a programmer, too.

But then we watched a debate-performance clip in which he spoke of carpet-bombing Syria. I was hoping she'd keep an open mind, but Ivy announced her nickname for the Texas senator: "Ted Cruel." I couldn't help smiling at her wordplay.

Next up: Sen. Marco Rubio. We watched "Bartender," an ad about how his bartender father worked hard and sacrificed for young Marco, and another, called "Safe," in which Rubio lashes out at President Obama, saying "I approve this message because America needs a real commander in chief." Afterwards, Ivy dubbed him "Marco Rude-io."

I was beginning to despair over her partisan tone when we flipped to the Jeb Bush channel. His campaign commercials taking aim at Donald Trump were the cleverest ones we'd watched all night. A spot called "Enough" begins with someone googling "Donald Trump is a Jerk," which made Graham laugh out loud. In it, Bush takes the businessman to task for mocking a disabled reporter. Graham liked the ad so much he wanted to see it again.

Lastly, we tried the John Kasich channel. His ad "Lift" begins: "Both of my parents always taught me that those people who are hurting are those we need to help." We could all agree with that.

Ivy couldn't think of a nickname for him. "Is he a bad guy or a good guy?" she asked, confused. "Neither," I explained. "These are all good people. They just disagree over how to run the country."

I'm not sure that lesson sunk in. But I know the kids are interested in the 2016 presidential election — every time there's a vote, they're as eager to hear the results as I am. At least they're not begging me to change the channel.

Use Your Words 2016 election