Camp Thorpe Offers Summer Fun to Those With Special Needs 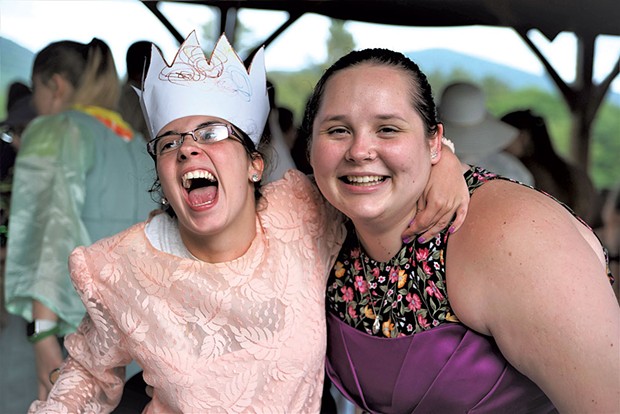 Almost a century ago, Rev. Walter Thorpe and his wife, Vena, purchased a 100-acre farm in Goshen, on a ridge of the Green Mountains. After using the property as a family summer home for several years, Thorpe decided the site would be the ideal place for an overnight camp.

Thorpe ministered at summer camps in the Northeast and was struck by the fact that they catered only to affluent, healthy children. He resolved to create a place where lower-income children with physical disabilities could enjoy the same simple pleasures.

In the spring of 1927, Thorpe borrowed $200 from the First National Bank of Brandon and demolished existing buildings on his property. Between mid-April and July 1 of that year, with the help of several workers, he built housing and a washhouse for 75 campers, and converted an old henhouse into a dining hall.

That summer, 17 girls attended the camp: one from Vermont and the rest from Brooklyn, N.Y., and Boston and Springfield, Mass. Walter and Vena ran it, along with one of their daughters and a nurse. Fifteen of the campers had paralysis caused by polio — the New York City polio epidemic occurred in 1916. Another suffered from bone tuberculosis, and one had a congenital hip condition.

In the following years, enrollment grew steadily; in 1932, a boys' camp was established. Though Walter died suddenly in 1933, the camp that bears his name has endured to this day.

While some things have changed in the 93 years since Camp Thorpe's inception, others have stayed the same. The majority of today's campers have developmental disabilities rather than solely physical ones — ranging from autism to Down syndrome to cerebral palsy. As a result, the site now serves both children and adults, the majority of them from Vermont. The 200 to 250 campers who come each summer for one- or two-week sessions range in age from around 12 to 79. Some have been attending camp every summer for three or four decades.

"We love our people," said current director Heather Moore, explaining why participants never age out of Camp Thorpe. "There wasn't a reason to say, 'You can't come back.'"

Some campers' special needs necessitate a one-on-one aide, which the camp can help set up. Otherwise, the ratio of counselors to campers is 3-to-1. The large number of staff members and the lengthy application form that caregivers fill out prior to arrival allow for individual needs to be met. Moore recalls a time last year when a camper who was afraid of the dark refused to leave the dining hall. The staff looked up her application form and found that she really liked "Scooby-Doo." So Moore pulled up the "Scooby-Doo" theme song on her phone, and a group of staffers were able to coax the camper back to her bunk.

Members of the current camp leadership have ties to the founding family. Lyle Jepson and Martha Heath, copresidents of the camp's board of trustees, were both married to descendants of Walter and Vena Thorpe. (Both are now divorced.)

Jepson, who was director of Camp Thorpe from 1992 to 2014, said that in its early years, the camp was "really a family volunteer effort," and over the years, it has had to more clearly define its mission and "become more businesslike" to raise funds in the competitive nonprofit arena and attract new campers.

Societal norms have also evolved, continued Jepson, so that now inclusion of those with special needs into the mainstream population is often favored over having a space exclusively for those with special needs. However, he believes that campers benefit from being with others who have similar issues for a finite period of time. "I don't know that others who don't have a special need realize what it's like to go through life with that special need," he said. Activities at Camp Thorpe, like dance parties and skit nights, give campers the opportunity "to just have a good time and get outside themselves in a safe, caring environment."

And the location is "incredible," said Heath. "You're up in the hills of Goshen; the Green Mountains and the Long Trail are behind you on one side; the Adirondacks are visible down in the valley. It's just a magical setting."

The 171-acre campus boasts 25 cabins and plenty of wide-open space for activities. There's a stocked pond for fishing, a pool with a gradual slope to accommodate those with physical limitations, a basketball court and a one-mile paved walking loop that winds through the woods. Last summer, the camp nurse brought therapy goats that campers could play with during nature time. Another counselor brought cocoons that hatched into monarch butterflies.

Many campers do more physical activity than they have in a long time, from walking to the dining hall to participating in evening dances, said Moore: "A really common refrain from caregivers at pickup is that their campers look so much happier and healthier."

Yami Hella's 15-year-old daughter Alana has been going to Camp Thorpe for the past three years. Alana has autism and has difficulty relating to peers and making friends, said Hella, who lives in Ludlow. In the past, she tried other day camps for Alana, but "they've never worked out." But at Camp Thorpe, she "can goof off and be herself."

Amy Williams of New York City has sent her 12-year-old daughter Sammy to Camp Thorpe for the past two years. Sammy, who is a twin, had a brain hemorrhage at birth and has numerous developmental delays. Williams found Camp Thorpe in an online search. There are not a lot of things and people that Sammy remembers, said Williams, but she talks about Camp Thorpe all year. And since Sammy's twin, who does not have special needs, goes to sleepaway camp for most of the summer, Camp Thorpe "gives Sammy a sense of parallel."

Because of COVID-19, there's still uncertainty about whether camps will be open this season. "We're still weighing what the future will look like and continue to monitor the situation closely," said Moore. "Obviously, we will do whatever is best for the health of our campers. We are deeply saddened at the prospect of camp not running."

Meanwhile, she's researching alternatives to overnight camp — volunteer opportunities for the camp community, day programming or even socially distanced s'mores nights. "We very much want to spread the joy that is camp," she said, "but it just might look different."

At press time, it's unclear how overnight and day camps will be affected by COVID-19. On March 27, the American Camp Association stated that it is "developing guidance and resources to help camps be the best possible public health partners this summer." We're hopeful that camps will find ways to bring joy to kids during these uncertain times.