Burlington businesswoman Janet Stambolian was scrolling through Facebook in 2013 when a photo of the first-ever Mamava lactation suite, at Burlington International Airport, caught her eye. "It looked like a little spaceship," she says of the freestanding "pod" for breastfeeding mothers.

Stambolian grabbed her phone and called Gene Richards, BTV's director of aviation, who had posted the photo.

"I'm an old feminist," says Stambolian, who cofounded Burlington's Girls Nite Out Productions. "I looked at that suite and thought, I want to sell those."

Stambolian — who is now Mamava's sales manager — had a feeling the pods would take off. She was right.

The company has created a novel solution to a vexing problem. The American Academy of Pediatrics recommends that moms breastfeed their babies for at least the first year. But nursing mothers often struggle to find clean, private places to feed their babies or use their breast pumps.

Enter Mamava — a name that includes the Spanish word for "go." The Burlington-based business designs lactation stations that can be installed in workplaces and public spaces, such as airports, hospitals and arenas, making it easier for moms to keep breastfeeding. Inside each pod's curved, womb-like walls is a seating area made of food-service-grade fiberglass.

Mamava placed its first pod at BTV in August 2013; there are now 20 of them in more than a dozen states. Lactating mothers can pump in sleek suites at the Pinnacle Bank Arena in Lincoln, Neb., the New School in New York City and the Children's Hospital of Philadelphia, among other locales.

The company is on track to install about 120 new units this year, including at each of the major New York City-area airports — JFK, LaGuardia and Newark — which will be delivered in time for Mother's Day. The team has also created an app, the Mamava Lactation Station Locator, to help moms find nearby pods and recommend other pumping-friendly spaces all over the country.

Why is this little Vermont startup becoming so popular? Chalk it up to a fusion of old-school feminism and innovative design — and a boost from Obamacare, which now requires large employers to support breastfeeding.

On a recent weekday, some 15 Solidarity designers sit at one long desk, tapping on keyboards to the bass line of TLC's "No Scrubs." On a coffee table in a lounge area is the raunchy party game Cards Against Humanity, along with a book called Play All Day: Design for Children. Cubbies packed with design books separate the lounge from a small kitchen stocked with wine, beer and a super-size bottle of hot sauce. An acoustic guitar leans against a stand.

"Does anyone want kombucha?" CEO Mayer asks when the rest of her six-person team arrives. The trendy, fermented beverage is on tap in the office kitchen and served in elegant glasses.

"That'll probably help with milk production," Mayer advises as she hands over a glass to a lactating reporter.

Back in 2006, Mayer was working as a brand strategist for JDK. She recalls breastfeeding her infant daughter and "suffering the indignation of using a breast pump in restrooms while on the road."

At the corporate headquarters in Seattle, nursing mothers had unlimited access to a "lactation room" where they could pump their breastmilk to store for later use. But baristas weren't afforded that luxury. If they chose to pump their milk, they had to do it in customer restrooms, keeping track of the minutes they were using up.

"There's got to be a better way," Mayer recalls thinking, before writing a letter to Starbucks in which she articulated her view: Breastfeeding should be a right, not a privilege.

Mayer's letter "never went anywhere," she says. But her outrage did. At a JDK pitch session, she laid out her idea to create a simple, portable lactation station. 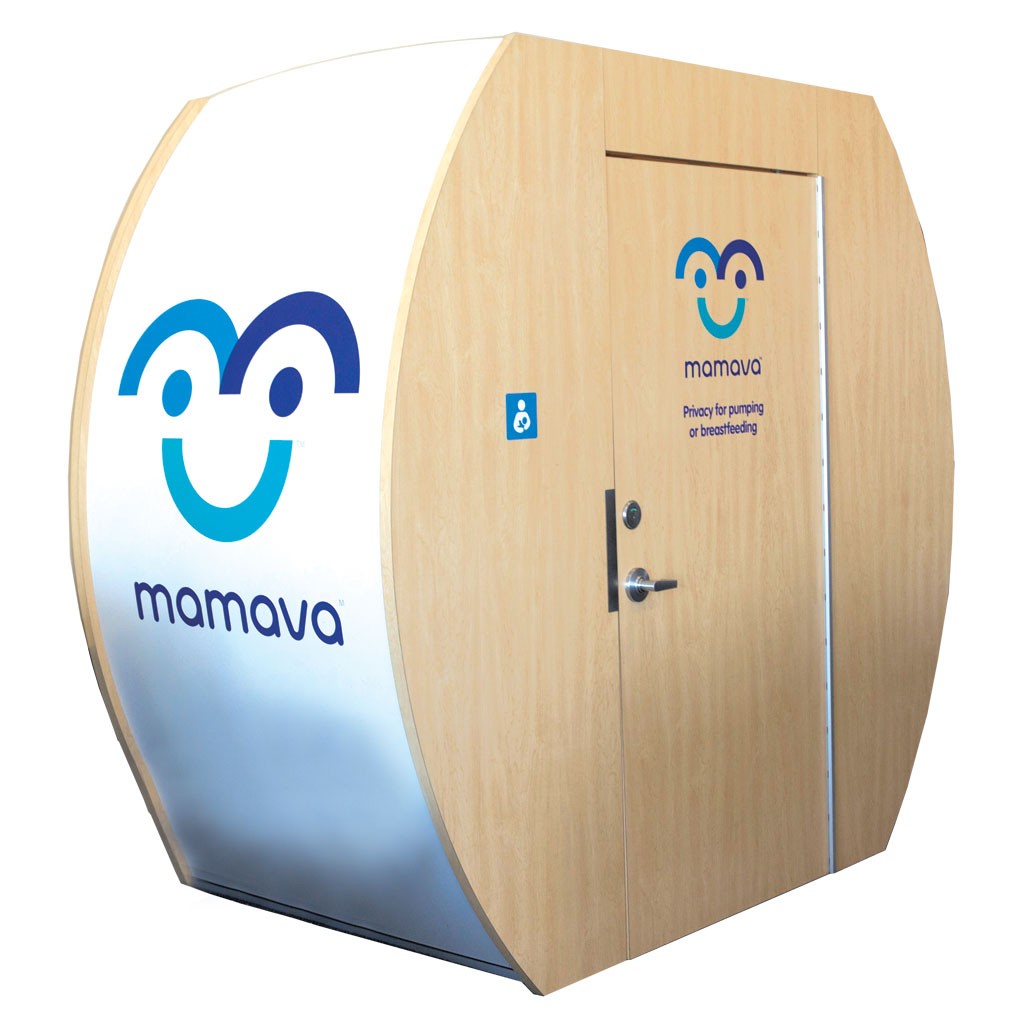 Her coworker Christine Dodson, JDK's managing director, was also a working mom. She, too, identified with the exhaustion and isolation new mothers often feel. "We could all tell these stories of misery," says Dodson of pumping at work and on the go.

Then, in 2010, they got a chance to change the narrative. The newly passed Affordable Care Act required businesses with more than 50 employees to provide a private space other than a bathroom for employees to pump, and the time to do it. Mayer and Dodson realized they were on the frontlines of a movement. JDK's Michael Jager gave the duo the green light to focus exclusively on their project, and Mamava was born.

With JDK resources at their disposal, Mayer and Dodson, Mamava's COO, began to build a brand. They enlisted designer David Jaacks, based in Springfield, Vt., to create a welcoming, eye-catching lactation station.

Mamava's big break came when BTV's Richards agreed to install a prototype in the Burlington airport. Mayer and Dodson call him their "fairy godfather." They built the first pod in Richards' driveway.

The administrator had been getting requests for lactation spaces, especially in the wake of a 2006 incident at the airport in which a woman was kicked off of a Delta Air Lines plane for breastfeeding her 22-month-old daughter before takeoff.

"That was insane," says Richards of the airline's decision. "It makes no sense ... and we didn't support that."

Around that time, Jager, who attends the same gym as Richards, pitched him the Mamava idea. Richards thought it was "brilliant."

"The [airport] industry doesn't always get it," Richards says. "They'll build a family room [for breastfeeding]. But a family room is still a bathroom. Do you want to eat in a bathroom?"

His support of the project wasn't just logistical. "My mom brought me up to 'respect your mom,' and respect women," says Richards, noting that giving women a clean, private space to feed their babies is simply the right thing to do. BTV has since converted a payphone room into a second lactation space.

Jaacks designs each Mamava pod, and Rhode Island-based Orion RED manufactures them. The newest models provide a 32-square-foot space, and the $11,250 price tag includes installation, with an extra charge for delivery. Mamava hopes to secure sponsors for future pods — there's space, inside and out, for advertising — so they can be installed for free in places such as urban health centers.

Some units are locked, with signs directing moms to get an access code or key from guest services. Others are considered self-policing. So far, no one has been caught using the pods for dubious purposes. "It would be like a man coming in and out of a women's restroom," says Mayer. "People would notice, and intervene."

The pods may be designed for moms, but the people buying them aren't always familiar with the mechanics of breast-milk production.

"There were many times when we had to educate men who ask, 'Why can't they just wait till they get home?'" says Mayer. "But men tend to want to be fixers." In other words, once they know there's a simple solution to the problem of pumping on the go, they're usually on board.

Since the word has gotten out about Mamava, Stambolian has had to do less convincing. Over the last year, she says, "I've made exactly two cold calls." All of the sales "have been people coming to us."

She adds that those transactions have been surprisingly warm. "Maybe there's a reverence for this work," says Stambolian, referring to the act of breastfeeding. "Something about this product that has touched a really positive chord with people. You'd have to be a real cold jerk to not get how special this is."

When a pod "lands," says Mayer, the idea catches on. The team recently installed three pods at the Milwaukee airport, and, on the same day, higher-ups at the city's zoo called to order one. "They're breeding," she quips.

"I don't know if we can take credit, but more airports are putting in lactation rooms now, even if they're not ours," says Dodson. "It's good for us, and it's good for moms."

Though she sells a product that conceals the act of nursing, Stambolian insists that Mamava's pods aren't about "ghettoizing women behind closed doors. We're very aware that this is about creating access and options to continue breastfeeding," she says.

"It's really about empowering women to get back to work," adds CFO Janice Shade, who joined the company last May.

Shade has created another, dovetailing business, Milk Money, which will help Mamava garner investments from Vermonters (see sidebar). Her Milk Money cofounder, Louisa Schibli, who had her kids while living in Europe, says that when she returned to the U.S. she was surprised by how timid American women were about breastfeeding in public. In Europe, she says, "you pull out your boobs [to nurse] everywhere!"

The cultural differences are also apparent on Mamava's Facebook page, where there was strong reaction to a Brazilian newspaper's article about the airport pods.

"Why do you people have so many issues with breastfeeding that you need to keep mothers and babies hidden?" wrote Maria Cecilia Santos from Sao Paolo.

"Why do we need to be boxed in to feed our babies?" added Marina Cattai from Toronto. Dozens of incredulous commenters piled on.

Mamava was conceived from a place of empathy by nursing mothers who had to hit the road with our breast pumps ... The U.S.A has no paid maternity leave. Brazil provides a minimum of 120 days paid maternity leave, so nursing mothers aren't forced to leave their babies. Moms in America have been pumping in bathrooms. As it takes hold as an amenity for pumping and nursing we think of it as a billboard communicating that there are many, many breastfeeding moms who could use all the help they can get, actually bringing the discussion into the open (not hiding it in a bathroom stall or under a blanket).

The Mamava team sees itself as fighting a grand battle. When Stambolian came on board, she had silver bracelets made for each of them, reading, "We each have different gifts for the revolution."

But the team members are united in their vision for the future. In the short run, that means creating pop-up lactation suites for temporary events, and installing hospital-grade breast pumps inside the pods.

In the long run, it means something much bigger. Mayer and co. want to ensure that all breastfeeding women get the support they need. When asked what Mamava will have accomplished in 10 or 15 years, the CEO says, "I think we will have solved this problem in North America."

The Spawn of Mamava

In May, Mamava is embarking on a campaign that will allow anyone in Vermont to invest in the company. It's made possible by the recently enacted Vermont Small Business Offering Exemption, a crowd-funding rule that allows businesses to pool up to $2 million worth of small investments — $250 to $5,000 per person — rather than rely solely on accredited investors.

Mamava CFO Janice Shade and Louisa Schibli are setting up their own business, Milk Money, to help Vermont companies take advantage of the VSBOE; it launches on Mother's Day. Their first client? Mamava.

Securing hundreds of minor investments, and managing relations with those investors, can be complicated and time-consuming, says Shade. "Entrepreneurs just want to do their business."

That's where Milk Money comes in. For a $3,000 upfront fee, paid by the corporate client, Shade and Schibli will navigate the trickier, time-consuming parts of the VSBOE process. They'll sort out the legal stuff at the start, manage investor relations and provide businesses with a Kickstarter-type web platform.

The original print version of this article was headlined "Got Milk? "