Behind the Music: Rockin' Ron the Friendly Pirate 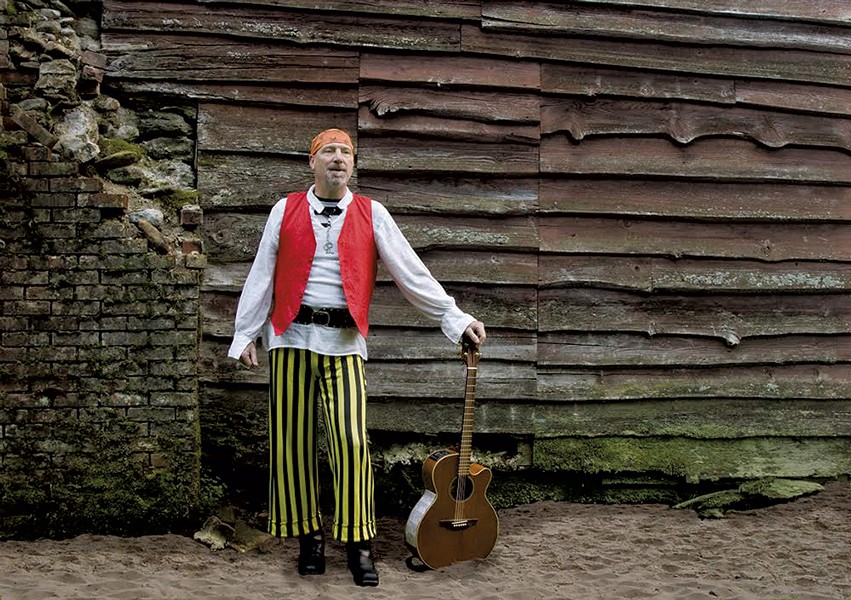 In July, Rockin' Ron the Friendly Pirate released his latest full-length record, Talk Like a Pirate. The rollicking collection of nautically themed children's tunes is the affable Vermont buccaneer's fourth album and follows 2016's The Flying Pirate Circus. That recording drew consideration for a Grammy nomination, along with several dozen other kids' albums. Though it wasn't a nominee, the album cemented Rockin' Ron's status as one of the premier children's entertainers in the Green Mountains, if not the Seven Seas.

Rockin' Ron is the sea-faring sobriquet of Jeffersonville's Ron Carter, 60. Seeking a quieter, rural life, Carter moved to Vermont from Philadelphia 27 years ago with his wife, April Tuck. He left behind a career in music promotion, working with artists ranging from rocker Pat Benatar to glam metal band Slaughter to the hip-hop group, Arrested Development.

Carter now works in a variety of capacities for Smugglers' Notch Resort in Jeffersonville, where Rockin' Ron is also a regular performer. He volunteers at the University of Vermont Children's Hospital, as well as at Camp Ta-Kum-Ta, a local summer camp for children with cancer.

While Rockin' Ron is a singing swashbuckler with a knack for pirate puns — he never passes up an opportunity for an elongated and energetic "Arrrrrr!" — Carter is a Berklee College of Music alum who studied songwriting and composition. Formal training at that renowned Boston conservatory is evident in his music. Even as Rockin' Ron sings silly shanties about peg-legged dinosaurs ("Peggy the Peg-leg-osaurus"), goofy sea creatures ("Wigglely, Gigglely, Squigglely Squid") and, of course, treasure ("Duncan's Sunken Treasure"), there's a musicality to his material that delights young scalliwags and old salts alike.

Kids VT recently caught up with Rockin' Ron by phone to talk about pirates, his new record and the challenges of writing songs for kids that won't drive their parents to walk the plank.

KIDS VT: Was there any hesitation as a pirate about moving to Vermont and being so far away from the ocean?

ROCKIN' RON: Well, the definition of a pirate is a thief on a body of water. Of course, I'm a friendly pirate, so the only thing I'm going to steal is people's hearts. But a body of water doesn't have to be an ocean. It can be a river or a lake or a stream, and I'm near plenty of those.

KVT: You played in rock bands before you became a rocking pirate. How did you make the transition into children's music?

RR: I was playing some original songs for a friend of mine, and he said, "Have you ever thought of writing kids' music?" And I never had. So I wrote "I'm the Friendly Pirate" and the resort, Smugglers' Notch, where I work, asked me to come up with some characters, and the Friendly Pirate was one of the characters I created.

KVT: What were some of the others?

RR: I also had a character called the Woodchuck, which was kind of a Rusty DeWees "The Logger" kind of character, but that didn't really take off. I had another one called Farmer Joe and another called Groovy Dude, but the Friendly Pirate was the one that took off. Songwriting is my passion, so I just kept writing songs for the character.

KVT: Yar. Do you ever find the character constricting, creatively?

RR: I find that it's pretty much limitless what you can do with pirates [in kids' music]. You've got geography and culture and history. I manage to work in just about anything.

KVT: What is the most challenging aspect of writing music for children?

RR: I always try not to talk down to children. Like "Pirate Party Pooper," for instance, I didn't want to make it a negative thing. I wanted to be silly and call someone out a little bit but have fun.

The other part is trying to appeal to adults at the same time. But you don't have to dumb things down for kids. You can talk to them like intelligent beings, which they are.

KVT: So who are the Friendly Pirate's musical influences?

RR: I try not to listen to other children's music too much, because I don't want to be influenced by that. On CD Baby, I list Raffi as a "similar artist." And They Might Be Giants, who I actually think of myself as more like; I'm quirky. And then I list Dan Zanes, just in terms of an overall appeal to a demographic.

In general, I'm a huge fan of the Beatles and Paul McCartney, Bob Dylan. For new bands, I like Old Crow Medicine Show.

KVT: Did you have a specific vision in mind for the latest record?

RR: Not really. At this point, I have kind of a formula: I try to do a parody on every album, and a song about numbers, a song about a historical pirate on every album. If there's a theme on this album, it is that, sonically, it's probably my most rock-flavored album.

KVT: Well, you are Rockin' Ron, after all. Do you have a favorite pirate?

RR: Yes, I do. That would be Black Sam Bellamy. He referred to himself as "the Robin Hood of pirates." It's said that he would capture a ship but let everyone go free if they wanted to — he wouldn't force anyone to be part of his crew. And he would steal things, but never treated anyone badly, per se.

KVT: Speaking of crews, you have an enormous list of guest musicians on the new album. What can you tell me about them?

RR: I like to get professional musicians, but I also like to include family and friends and kids, because I really believe that you can hear on a record if you've got people who are having fun. Sometimes professionals hit all the right notes, but you don't get that same feeling of frivolity.

KVT: And your wife is on the album, too, singing and playing bodhran.

RR: She's been such a great supporter. But I got into trouble with her once because I got my ear pierced, which she had wanted me to do for a long time. When I finally did it, she said, "It took a silly pirate character for you to get your ear pierced, and I've been asking you to do it for years!"

This interview has been edited and condensed for space and clarity.

Learn more about Rockin' Ron the Friendly Pirate at rockinronthefriendlypirate.com.