Backpacks or Strollers: Which is Better for Babies' Development? 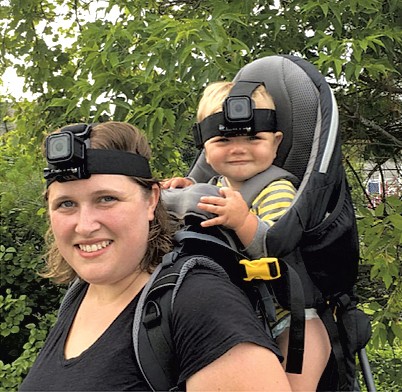 When Gina Mireault's son and daughter were small, she often chose a backpack baby carrier rather than a stroller out of necessity. She owned two golden retrievers, which she walked twice a day, and the backpack provided a better hands-free option. Whenever she carried her babies on her back, Mireault noticed a difference in their behavior: They seemed more active, alert and verbal than when they were in a stroller.

Two decades later, Mireault, who's now a researcher and professor of psychology at Northern Vermont University-Johnson, put those observations to the test with a study to see whether other babies behave differently in strollers than in backpacks. While market research has shown that 99 percent of all new mothers own a stroller, only 17 percent own a backpack carrier.

Mireault's 2016 study involved 36 infant-mother and infant-father teams. All of the babies were between the ages of 7 months and 11 months, and all of the parents regularly used both strollers and backpacks. As Mireault explained, this design ensured that any differences observed were due to the mode of transport itself and not to another factor, such as differences in socioeconomics, education level or physical activity.

Moreover, about half of the parents said they preferred using strollers, while the other half preferred backpacks. The research compared strollers to forward-facing backpacks only, not to front carriers or slings, in order to limit the number of variables. All infant-parent teams used their own equipment.

The results of Mireault's study, "Push or Carry? Pragmatic Opportunities for Language Development in Strollers versus Backpacks," are published in the May-June issue of the journal Infancy. They confirm what she'd long suspected: When compared to strollers, she writes, backpacks are more likely to "increase the opportunity for shared perceptual, linguistic, kinesthetic and social-emotional experiences between caregivers and infants."

KIDS VT: Why did you do this study?

GINA MIREAULT: I don't think it's something that a lot of parents think about. They just use whatever is convenient and don't necessarily think about the developmental differences. One reason that comparing transport modalities is important is because parents employ them early, frequently and throughout the first year. So it's helpful for parents to think about the benefits their babies get in one versus the other.

KVT: How did you gather your data?

GM: My research assistants, Scott Rainville and Breanna Laughlin, set up times to meet with participating parents in the locations where the parents typically take their walks. We didn't want this to be weird or unusual for the babies. They then outfitted the infants and parents with head-mounted GoPro video cameras, which weigh only 2.4 ounces, or the equivalent of two slices of bread. As all the infants were winter babies, they were accustomed to wearing hats.

KVT: How did you ensure that the timing of the experiment didn't affect the results?

GM: We had the infant-parent teams take two walks, following the same route. The walks were eight minutes apiece. Each parent was given a timer that would go off after four minutes, and they'd turn around and return the same way. Then they'd switch conditions — say, from backpack to stroller — then start the timer, take the same walk and repeat.

KVT: How did you process the recordings?

GM: We coded the video for frequency of infants' vocalization, meaning how often they chattered. These were infants who were not speaking yet, but babblers. We wanted to know if they were babbling more often, and for longer periods, in one condition or the other. We also measured whether the parent was chattier using the backpack or stroller and measured how often and for how long they chatted. We then looked at reciprocal vocalizations, meaning what constituted a conversation. Finally, we coded for the infants' head-turning to measure how often they scanned their environment.

KVT: And the backpacks "won"?

GM: Yes, but I don't want to give the impression that strollers have no place or that infants should always be carried in a backpack. The takeaway is that infants are getting quite different developmental opportunities in one mode versus the other. We expected this.

GM: It just makes intuitive sense. Infants are in closer proximity when they're in a backpack. And when they're upright, they're more alert. Other studies have shown that, as well. We found that both parents and infants vocalized longer and more often with backpacks than with strollers. We also found that infants were much more likely to initiate conversations when they were in backpacks. They also turned their heads more often, meaning they were more alert and engaged with their surroundings.

KVT: Ultimately, what do you take from this study?

GM: This and other studies show that when infants are upright and facing forward, they have what's called an "alertness advantage." They're taking in more about the environment, they're more responsive to that environment, and they give more feedback to their caregiver — and the caregiver is more likely to respond, as well. This makes sense because, if you have a baby on your back, it's not just their vocalization you respond to. There's kinesthetic feedback that's fairly nuanced, and caregivers pick up on that. So even if the baby doesn't vocalize but is wiggly, you're going to look around to see what they're wiggling about.