Agency of Education Names 2020 Vermont Teacher of the Year 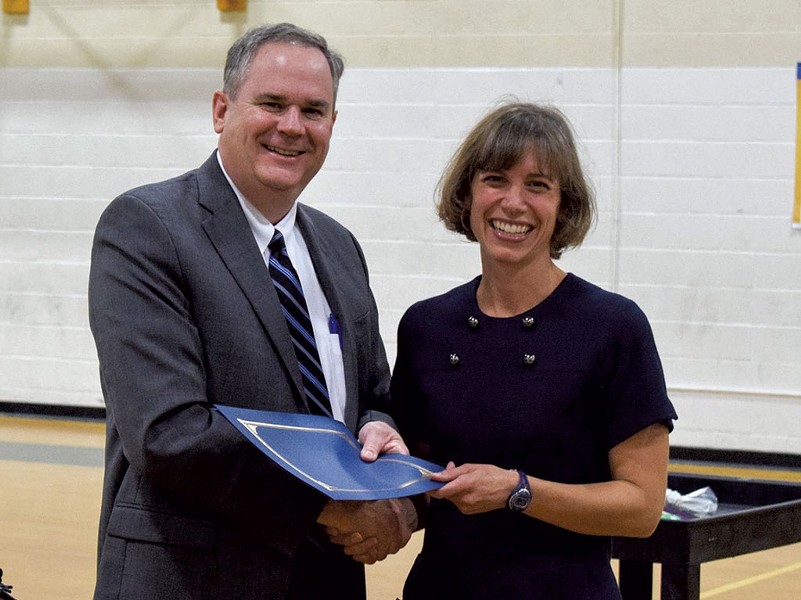 Five years ago, Elisabeth "Bibba" Kahn returned to her alma mater, Montpelier's Main Street Middle School, to teach French and Spanish. In mid-October, students lined the gym bleachers for an all-school assembly and cheered as Madame Kahn was named the 2020 Vermont Teacher of the Year. Her new role will take her around the state to visit schools and work with other teachers.

"I'm blown away by my colleagues every day, and I know that we all are working really hard," she said. Still, some students don't achieve proficiency. "I've been spending a lot of time thinking what we can do to reach those kids ... " she said. "At the root of it is, kids need to feel seen and valued, and they need to know that their teachers are committed to their learning." Simply greeting students by name as they walk into the classroom has been shown to boost achievement, Kahn said. Spending a few minutes asking about their day, meeting them where they are and then getting to work helps, too. On a deeper level, teachers can adopt informed practices to accommodate students who have experienced trauma and to include those who belong to historically marginalized groups.

A sign prohibiting Google Translate hangs in Kahn's classroom, where students sing and play games to learn language. As she travels the state and learns what's working for other teachers, Kahn hopes to facilitate an idea exchange and create a broad community of colleagues.

"This award could not go to a more deserving professional," Montpelier-Roxbury Public Schools Superintendent Libby Bonesteel said in a statement.

Kahn got the nickname "Bibba" when her younger brother couldn't pronounce Elisabeth. She took a gap year after graduating from the Taft School in Watertown, Conn., and taught in Ghana for six months. She earned a bachelor's and a master's degree from Middlebury College, spent three years coordinating and organizing travel programs at Putney Student Travel, and taught in Maryland, California and New Hampshire before coming home to Main Street Middle School.

The history and English teachers she had at Taft School are among her most memorable. English teacher William MacMullen — Mr. Mac — assigned a lot of writing, critiqued it harshly and churned out solid writers, she said. "No matter where our writing was when we started, his expectation was the same for all of us. And it was high."

Jon Willson was the only history teacher Kahn had who required students to use primary sources and develop their own understanding and interpretation of history. "It made me feel like a scholar," she said.

Kahn's own students will likely remember her as a teacher who let them determine how they wanted to learn language and how to demonstrate their proficiency. They will remember songs about conjugating verbs. Some like those songs more than others, she said. "But they all know them." She occasionally gets emails from former students, now in high school, saying things like, "We were learning this verb again in French III, and I sang the song for them!"

The Vermont Agency of Education has recognized outstanding teachers with the Vermont Teacher of the Year Award since 1964. Bethany Morrissey, an elementary teacher at Salisbury Community School, and Emily Therrien, a 10th grade English and social studies teacher at Randolph Union High School were recognized this year as distinguished finalists.

In the News Elisabeth Kahn Vermont Teacher of the Year