Mathias Toro doesn't sit still. On a recent summer evening, while his dad, Alejandro, chatted with a reporter, the lithe and springy 9-year-old did round-offs, handstands and splits on the Rochester town green.

Mati, as his family calls him, began doing gymnastics at age 4. But soon he'll put his flexibility, long legs and strong core to work in a whole new way. This fall, he'll enroll in the School of American Ballet, the official training academy of the New York City Ballet at Lincoln Center.

He never set out to be a ballet dancer. He began gymnastics when his family lived in Miami, and it quickly became a passion. When the Toros moved to Vermont three and a half years ago, he continued at Head Over Heels in Rutland. He currently trains at Green Mountain Training Center in Williston, an hour and a half drive from his home.

This past February, the family received a letter — seemingly out of the blue — from the New York City Ballet inviting Mati to audition for a tuition-free program for boys. (They later learned that Mati's former coach in Miami had sent a highlights reel to the ballet school.)

"There aren't enough male dancers," Alejandro explained, so the program often reaches out to boys who have never considered ballet. 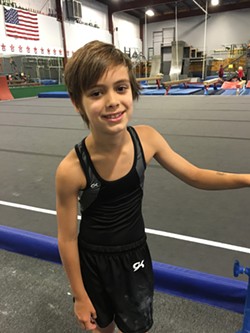 The Toros were surprised at first, but Mati wanted to pursue the opportunity. So, in March, they traveled to the Big Apple to vie for a spot, along with around 500 other boys. His audition, at Lincoln Center was very formal but also very simple. "They just wanted to see his movement and his grace," said Alejandro.

"First, they lifted my leg up" to test flexibility, explained Mati. "And then we had to do leaps across the floor." Was he nervous? "Nah," Mati said. His dad shook his head and smiled. "He was a little nervous." A month later, the Toros received an email from the ballet school: Mati was accepted to the program.

The first year is designed to ease Mati into his new life. He'll enroll in public school and take classes at the School of American Ballet in Manhattan just two times a week. He'll keep doing gymnastics, too. The next year, he'll start training six times a week.

Alejandro said his son is always moving at home. (At one point during the interview on the town green, Mati did a backflip off the picnic table while his dad spotted him.)

"He sometimes watches TV with his legs wrapped around his head like a pretzel," wrote his mother, Alecia, on the family's GoFundMe page, which they set up to cover the cost of moving their family of four, which includes 5-year-old Martina, to New York.

"He knows his body can do amazing things, and he revels in it," she continued.

In 2013 and 2014, Mati was ranked second overall in gymnastics for his age group in Vermont. Last summer he attended a camp in Barcelona where he trained with gymnast Gervasio Deferr, an Olympic gold medalist.

Mati says he is excited about this new adventure. The rest of his family is, too. "How can we not try this?" said his dad. "It's such a huge opportunity. It could mean so much."