A South Burlington Teen Sets Her Sights on Changing the World 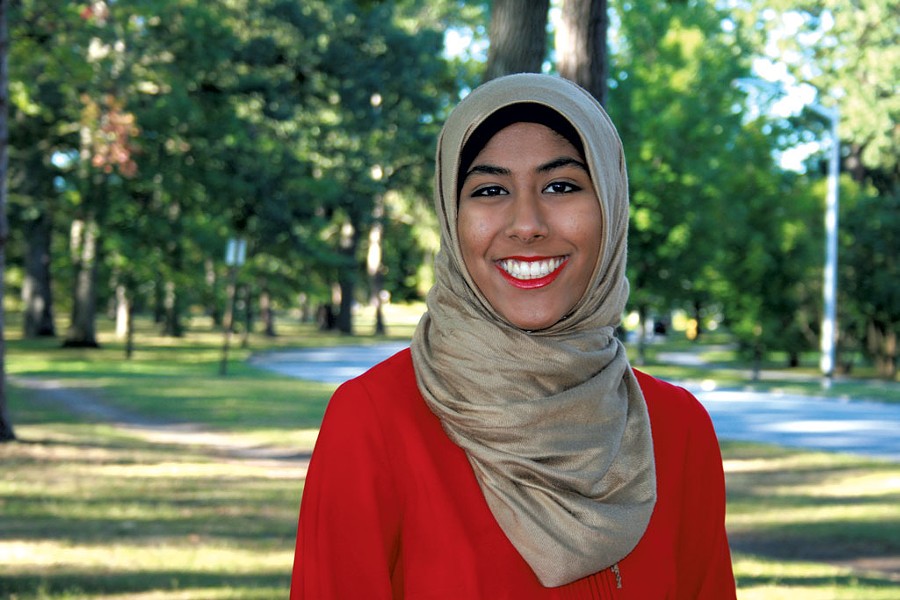 In the last year, Kiran Waqar has collected blankets for Syrians, made activity bags for hospitalized children and helped start a local chapter of Results, a nonprofit that works to end hunger and poverty.

So it's fitting that during a family vacation to Pakistan last summer, she made time for charity work.

Though the reason for the trip was to visit relatives, Kiran's dad, Waqar Waheed, didn't want to hold his daughter back. "When you see this kind of passion in your children, you've got to support them," he said.

His siblings in Pakistan connected Kiran with Door of Awareness, an NGO that provides free education to poor children in Lahore, and she worked there for a week. Kiran wears traditional Muslim clothing, covering herself from head to toe. It was early July, and the temperature hovered around 100 degrees. Lahore periodically went without electricity — and air-conditioning — in a practice called load shedding, done to avoid a power-system blackout.

"I, myself, who was born and raised in Pakistan, I could not stay outside for more than half an hour," Waheed said. "But this girl was dedicated."

It was also Ramadan, the holy month when Muslims abstain from all food and drink between sunup and sundown. Nevertheless, 16-year-old Kiran worked all day helping kids learn English and work on speeches they would present to their teachers and principal. Once, she even inspired her 7-year-old brother to join her.

When she explains her love for service, Kiran, the oldest of four children, sounds like a thrill seeker: "I volunteer because of the amazing feeling you get." Also, she explained that her religion requires her to be kind to other people. "My actions are bigger than myself."

Motivation and passion burn in Kiran, her father said. "You can see it in her eyes."

Kiran describes community service as a spark that ignites greater good. The blanket project, for example, garnered the attention of Gov. Peter Shumlin, and several Vermont businesses contributed to the effort. The group collected 5,000 blankets and articles of clothing and $2,000 in cash for people fleeing violence in Syria. One blanket going to one person helps enable the potential in that person, Kiran explained.

Of the kids she worked with in Pakistan last summer, Kiran said, "If they had the same opportunities as me, they could do so much more than I ever could. I want people to understand."

Getting conversations started is a theme in Kiran's life. In Vermont, she makes a statement just by walking into a room wearing a hijab — a Muslim headscarf — and an abaya or other long, modest dress. Born in Burlington, she decided last year, on the first day of her sophomore year at South Burlington High School, to wear the traditional clothes after years of working so hard to blend in.

"I realized I'm brown. I'm always going to be brown. Nothing is going to change that," she said, "and I should be OK with that."

Kiran also decided to speak up: She and three other high school students from Burlington and South Burlington started Muslim Girls Making Change, a youth group dedicated to social change through slam poetry. In July, they competed at the Brave New Voices International Youth Poetry Slam Festival in Washington, D.C.

The trip to D.C. was Kiran's second in three months. In May, she won a four-day trip as one of two Vermont students honored with a Prudential Spirit of Community Award, which recognizes volunteer service.

While there, she was invigorated by the energy of other student activists she met: "I came back to Vermont thinking, I can change the world.'