A Nova Scotia-Born Mom on Composting Before It Was Cool 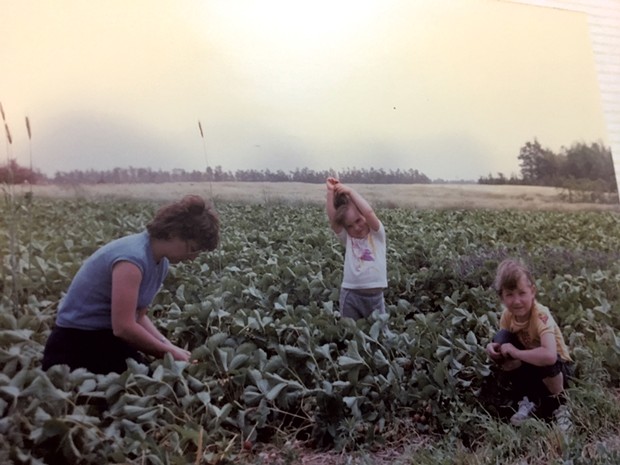 This July, it will be law in Vermont that food scraps can't be thrown in the trash. For some, that might feel like an impossibly difficult adjustment to daily life, but I've never known anything else. I grew up in the 1980s in Nova Scotia, a beautiful coastal province on the east coast of Canada. Since I can remember, my family always composted and recycled.

My parents were raised in rural Nova Scotia in the 1940s and '50s, where living sustainably was a way of life. My mother's father was a fisherman and smokehouse owner, and her mother was a homemaker. Dinner in those days was whatever had come off the docks that day. My grandmother made most things, from jam to clothing, by hand.

My father, one of 13 children, was born and raised in an Irish-Catholic household in Cape Breton. My grandfather, a coal miner, rarely saw the light of day. Seeking a brighter future, my father left Cape Breton in 1969 on a Triumph 650, bound for bigger and better things. Taking residence with a Greek family in Halifax, he went to college to earn his engineering degree.

When they married, my parents bought a plot of land and built a home, then along came my sister and me. Growing up, we had a large garden that provided us with carrots, peas, green beans and my favorite, tomatoes. My mom would blanch and bag the veggies and put them in the deep freezer for the cold months to come.

As a child, it was my job to carry out the veggie scraps. We had three contained compost piles next to our vegetable garden — a "fresh" pile for new layers of browns (like leaves, paper and hay) and greens (like veggie peels, fruit scraps and eggshells); a second pile that was still "cooking," or decomposing; and a third pile that had turned to soil, which we would shovel onto the garden beds in spring.

I have summertime memories of digging up carrots and finding lobster claws and mussel shells, and rummaging through the freezer for a popsicle only to find a solid frozen brick of vegetable scraps and eggshells. Yup, my dad would — and still does — freeze food scraps in the summer before throwing them onto the pile, which he says achieves the perfect "baking" temperature for decomposition. (I'm not sure if the science actually backs him up.)

Though my family managed our trash and waste well, not everyone in our province did. By the 1990s, the Nova Scotia government was faced with a problem: The landfills were reaching capacity. Instead of building a new landfill or incinerator, the government decided to double down on waste reduction by passing a law banning all organic and recyclable materials from landfills.

Before adopting new laws, Nova Scotia introduced an $8 million pilot program, which my family took part in. Since we had been recycling and composting for years, this new program didn't really change our routines, but it made them simpler and more regimented.

The government gave 100,000 households green bins for composting, blue bins for recycling and access to free weekly pickup service — and a new way of life was born. Instead of taking our recycling to the Girl Guide troop (Canada's version of the Girl Scouts), who collected it on Saturdays as an environmental initiative, our cans and bottles were picked up curbside! For my 10-year-old self, whose chore it had been to cart recycling five blocks on those Saturdays, I preferred the short walk down the driveway.

When the law was passed, people welcomed this new system, and far less waste was sent to the landfill.

Fast-forward several decades, and the trash system in Nova Scotia is very streamlined (albeit a bit extreme by American standards). Every household, college dorm and office has three bins — black for trash, green for compost and blue for recycling. Cardboard must be broken down and tied together, then stacked with other paper products by the bins. Weekly pickup of recycling, compost and trash is free. All trash bags must be clear. (OK, technically you're allowed one small black "privacy bag" the size of a standard shopping bag, but that's it!)

While there are laws in place prohibiting organics and recyclables from going to a landfill, there are no fines for disobeying the law. Instead, the punishment is fueled by peer pressure. Would you want your neighbors to see coffee grounds in your trash bag? The shame! And it has worked. Within a year of banning black trash bags in 2015, 30 percent less garbage went to the landfill.

As an adult, my own composting journey has been an interesting one. I took a long hiatus from the practice in my twenties after a particularly traumatic incident. I was living in Halifax at the time and got home after being away for several days to find a bag of trash on the back deck that my roommates were apparently blind to. What I didn't know was that a roommate had tossed organics into the trash bag and left it to slow-cook in the sun for five days; leaking out onto the deck, it had an entire ecosystem of gross things living underneath it. Annoyed, I hoisted it over my shoulder. As a result, I was immediately covered with maggots. They spilled over my head, through my hair and all over my back. I screamed, swatted and flailed. In response, one of my roommates grabbed a jerry can and doused the deck of maggots with gasoline, then lit it on fire. I managed to leap onto the lawn so I wouldn't go up in flames. After that, I was unable to "deal" with trash and composting until I moved to Vermont 13 years ago.

Over time and through gardening, I became desensitized to bugs, and I have since let go of my crippling fear of maggots. It's a good thing, too, because I encounter them often in our compost bin, and no, I don't reach for a jerry can.

Thinking back to gardening with my mom, I feel so lucky that I can now share that activity with my two small children. They love to dig in the dirt, plant seeds, watch it all grow, and finally harvest all of the wonderful fruits and veggies of our labor. Our garden is abundant, in large part because we nourish our soil with compost. At 3 and 6 years of age, my children know instinctively that the apple core is tossed in a different bin than the cans or bottles or trash, which makes me proud and a bit nostalgic.

When Vermont's new composting law goes into effect this summer, be prepared, friends. You may encounter maggots and fruit flies, and you will need to figure out a system that works for your household. It won't always be easy, but I believe that this change will teach both adults and children to be more responsible for and respectful of the Earth.

Years ago, a small province in Canada set out on a path toward sustainable living, and now it's their way of life. I believe our state can do the same.

Use Your Words Nova Scotia composting