A 'Hybrid Mom' on Being OK With Imperfection 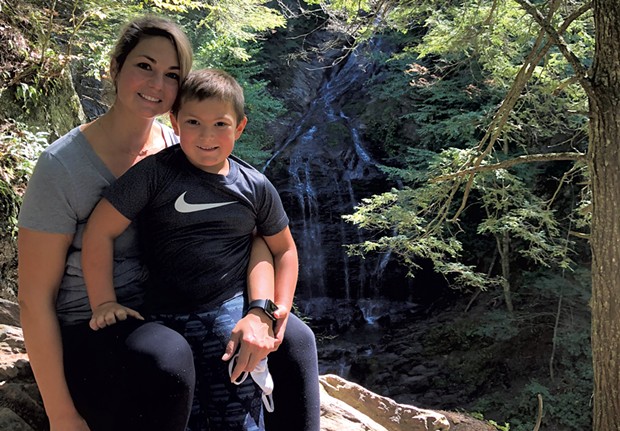 A month into Gov. Phil Scott's initial stay-at-home order, I scrolled through social media to see some friends posting about thriving in the remote-learning world. They had "never felt more bonded to their children," and they wished that this could be "the new way of life."

For me, this was crippling.

It wasn't my story; I was struggling to respond to work emails while mastering online learning programs and kindergarten phonics, all before the inevitable next "Mom! Can I have a snack?" I was overwhelmed with guilt for not having the same emotions I saw on Facebook.

My reality felt much different. Our young boys — my son, 6, and stepson, 8 — struggled to sustain the attention to navigate learning from home. As soon as it felt like things were on track, a work call would come in, and they knew now was the time to strike for screen time. Meanwhile, my teenage stepdaughters slept all day, only coming to the surface to have a debate about why it was unfair that they couldn't be with their friends.

Although there were some fun family moments, remote learning seemed much more like survival mode.

As Vermont began to open up, we rejoiced that the school year was coming to an end and began to carefully loosen our grip. I went back to work a couple days a week, and we allowed the teenagers to have a "COVID friend." I work in an essential business, so the news that the governor was opening summer camps was a life saver.

Although many parents decided to forgo sending their children to camp — understandably so — we felt as if we had no other option. My partner and I had to return to work.

I am an employee at PuroClean emergency services and co-owner of its sister company, Construction Management Direct. The businesses work hand in hand to mitigate fire and water damage to properties. I am one of three females within both organizations but the only one with school-aged children. On top of the pressure to balance work and life, my support system was dealing with their own setbacks. My son's father owns a local restaurant that was trying to stay afloat, and my partner works a 100 percent-commission job. All while our parents are either out of state or high risk. Summer camp offered us the ability to work and the freedom for our children to interact with a small group of peers. I became more and more hopeful that our children could safely return to school in the fall.

If we're having a Zoom meeting, there might be a child screaming in the background. tweet this

That is, until July 22, when an unexpected email came from our district superintendent. As I read the plans for all schools in Chittenden County to start in a hybrid schedule, I felt overwhelmed. The email stated: "Children will attend two days a week in person and three days will be spent with online learning." I know that this decision wasn't made lightly, and I respect the people that had to go through the process to make it. I understand that everyone's circumstances, fears and perspectives are different.

But I couldn't be the only mother worried by the news. In fact, I know I'm not. According to the U.S. Department of Labor, 80 percent of Vermont mothers with children under 18 participate in the labor force, and 45 percent are sole earners.

As September comes to a close, I've seen my son's fresh-off-the-bus energy and the sparkle in his eyes return on the days he attends in-person school. He's discovered his love of learning again, something that was lost in the fully remote setting.

Although having kids in school part of the week has offered some relief, many other demanding parts of our lives have returned. Fighting to get out the door in the morning, rushing kids to sporting events, and arguing over sleepovers have all resurfaced. However our pre-COVID chaos has now been met with in-home school days of balancing math packets with emails and work calls.

Even with the whispers of the younger children returning to school full time later this fall, it is hard to hold hope of a normal school schedule lasting during these unpredictable times.

So what now? How will working parents get through this school year?

Remember that old saying, "Fake it till you make it?" Well, that's out the window for me.

Chances are, if you work with me, there may be a time when you have to watch my son while I run to a jobsite. If we're having a Zoom meeting, there might be a child screaming in the background. I probably won't get through every single school assignment with my son. You'll probably see some Facebook posts asking my fellow moms to join me in babysitting trade-offs. My emails will most likely have lots of grammatical errors. Some days, I'll break down and let my kid have the ice cream.

It won't be perfect, but it will be real.

We don't know what the future will hold, but here's what I do know. This school year, you will be getting a hybrid mom, an unapologetically authentic, hardworking, love-with-all-my-heart, un-put-together hybrid mom that is committed to being as real as it gets.