A Bernie Book for Beginners 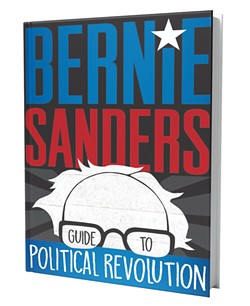 Anyone who has seen Bernie on the stump will recognize the mantras in Bernie Sanders Guide to Political Revolution, released in August as a young-adult counterpart to his book Our Revolution. The guide's epigraph — "Never ever lose your sense of outrage" — is a rallying cry to America's young people, whom Vermont's junior senator calls "the smartest, most idealistic and least prejudiced generation in the modern history of the United States." Each straight-talking chapter takes on a yuuuge topic, from universal health care to climate change. Throughout the text, phrases like "In my view," and "To my mind," weave around statistics, highlighted vocabulary words and bipartisan studies, suggesting that Sanders trusts young readers to form their own views. Sidebars with Sanders' tweets and infographics that look more like concert posters than charts about the wage gap and carbon emissions give the text a hip feel. As the foreword reminds readers, "Democracy is not a spectator sport."