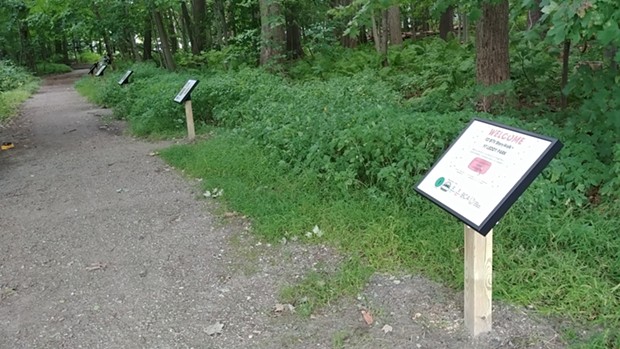 Looking for a literary walk in the woods? Last week, the Fletcher Free Library rolled out a new StoryWalk in Burlington featuring the picture book Pie is for Sharing  The book, written by Stephanie Parsley Ledyard and illustrated by local children's book writer and illustrator Jason Chin, uses a Fourth of July picnic to highlight the value of friendship and sharing.

Spaced-out wooden posts, each containing laminated pages of the book, line a walking trail that begins in the northeast corner of the Leddy Park parking lot and ends at the Burlington Bike Path. Some posts also include questions and activities intended to spark conversation and build early literacy skills. The installation — a collaboration between the library, Burlington Parks, Recreation & Waterfront, and Burlington City Arts — is permanent but the featured book will be changed every few months, said Fletcher Free youth services librarian Megan Estey Butterfield.

The idea for taking apart and laminating picture books, then putting them along a path, was conceptualized by Montpelier resident Anne Ferguson in 2007. Ferguson wanted to create a literacy resource that would also get families outside and moving. She called it the StoryWalk Project, and trademarked the name. She's assembled dozens of StoryWalk books since then, which she keeps in a storage space at Kellogg-Hubbard Library and loans out to recreation departments, childcare centers and nature centers free of charge for up to two weeks. She's also written detailed directions for creating your own StoryWalk, which can be found here.

For more information on the Burlington StoryWalk, visit fletcherfree.org/storywalk