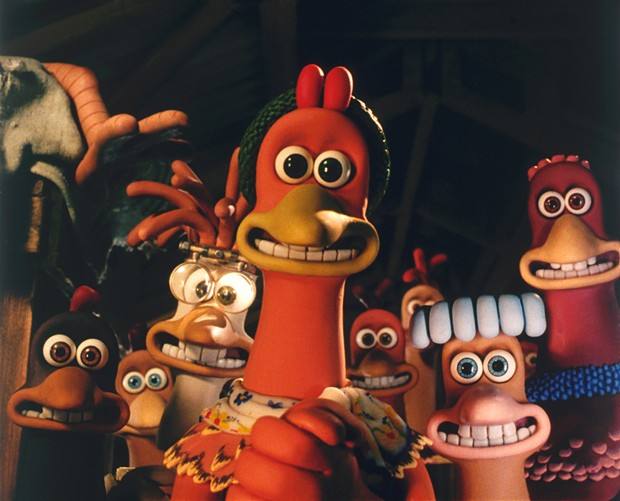 A few months ago, on the occasion of Chicken Run’s twentieth anniversary, Netflix announced it would be distributing Chicken Run 2, with production beginning next year. I thought it would be fitting this week to revisit the original stop-motion animation film. Chicken Run, released in 2000, was created by Aardman Animations, a British animation studio most notable for its droll Wallace and Gromit franchise. While the hens in Chicken Run are not as well-known as that duo, it’s a well-written film brimming with British humor, exceptional clay models, action-packed animation and imaginative sets.

The Story: In rural England, a farm of chickens produces eggs for the malevolent Mrs. Tweedy. Chickens are expected to fill a daily quota, and those who fail to meet expectations are executed and summarily turned into food. Ginger, one chicken among many, often devises escape plans that are met with fruitless results. As business at the farm suffers, Mrs. Tweedy arranges for her egg farm to manufacture a line of frozen food and begins work on a machine that will turn chickens on the farm into pot pies. As the hens race against time, a rooster named Rocky, who seemingly possesses the ability to fly, shows up — and brings with him a last-ditch possibility of escape.

Why It’s a Good Family Movie: While film cameras can capture motion effortlessly, that’s not the case with Claymation. Each frame is individually shot as a photo, with many photos making up just one second in the film. Furthermore, each frame needs to be meticulously planned so character movement appears natural. Factor in time spent building sets and modeling each character and their expressions, and you’re looking at well over a year in terms of production time for Claymation films. By comparison, an average Hollywood movie takes a few months, while many indie movies shoot in only a few weeks. Chicken Run was shot at 20 frames per second. At a running time of 1 hour and 35 minutes, that's roughly 114,000 photos taken to make the film! Children, or adults, watching this movie may be inspired to create their own shorts after seeing how clay and photography can come together to create a compelling film.

This film also serves as a family-friendly introduction to adult prisoner-of-war-themed films. In fact, it's a spoof of sorts of the 1963 World War II POW movie The Great Escape, directed by John Sturges. Shot from the chickens’ point of view, Chicken Run is a hellscape with chicken coops, watchtowers, and barbed wire hilariously overexaggerated to look like a prisoner’s camp. Dark horizons and farm machines are presented in a surreal, Kafkaesque fashion. From artistic direction alone, you can immediately sympathize with the chicken’s plight and entrapment on the farm. Following a motif of many POW films, the hens band together to overtake a common threat, offering a positive message about teamwork and collaboration.

Age Recommendation: The film features numerous scenes of peril, and Mrs. Tweedy is often seen wielding an axe, which she uses to decapitate chickens. There is one scene in which she succeeds, although it’s done off-screen. Mrs. Tweedy is also constantly beating up her oafish husband, although this comes off as slapstick. One scene features two chickens falling in a pie machine and almost getting diced, sliced and cooked. While no danger befalls them, it’s certainly scary. I would recommend this film for ages 8 and up.

Chicken Run is available for streaming on Hulu and available to rent or purchase on iTunes and Amazon.