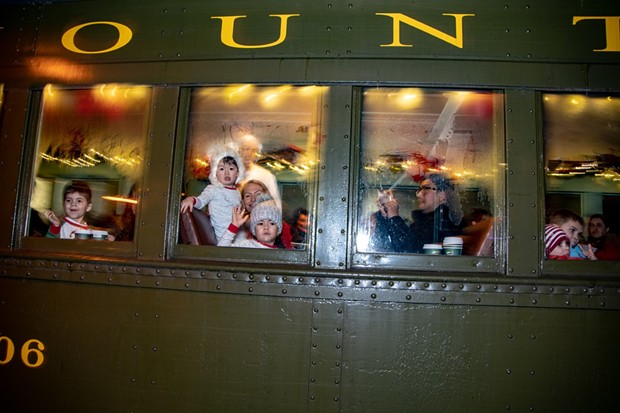 The holiday season seems far away, but the Vermont Children's Trust Foundation has already decided to offer an alternative to its annual Polar Express holiday fundraiser, which has been a local family favorite for 18 years. In years past, the event, which is inspired by the 1985 Christopher Van Allsburg picture of the same name, featured a train ride, caroling, a story time and an appearance by Santa.

The elaborate production usually happens several times over the course of two days in December and draws around 3600 passengers. But not this year. Instead, the organization will encourage donors to fund its community-based prevention programs for children and families by offering special DIY Polar Express packages.

Those who donate $100 or more will receive a package that contains everything needed to hold a Polar Express event at home: bells, golden tickets, chocolates, a note from Santa, and a link to an original video of The Polar Express being read aloud.

$150+ donors will receive those things, plus a signed copy of the Van Allsburg picture book and a Polar Express ornament.

Both groups of donors will be put on the advanced ticket list for the 2021 Polar Express.

Last year, the event raised $170,000, one-third of the organization's fundraising budget, according to executive director C. Fagan Hart. In 2019 Country Living magazine named it one of the 15 best Polar Express train rides in the country.

Hart said the decision to cancel the in-person Polar Express was made because the logistical challenges of pulling off a "hugely collaborative event" seemed insurmountable.

These included the feasibility of temperature checks and distancing families on a train and in Union Station. Additionally, the event typically relies on about 700 volunteers, many from school groups, said Hart.

Offering Polar Express-themed packages to donors will allow families to have a special night together at home and, said Hart, "keep the spirit alive until next year when we can ride again."