Forgotten Films: 'Castle in the Sky'

Coming fresh off of Kiki’s Delivery Service, I thought I’d recommend another whimsical Hayao Miyazaki film that’s often overlooked in favor of his more popular films. Castle in the Sky (1986) is a fantastical adventure film with a steampunk aesthetic that includes classic Miyazaki elements such as environmentalism, breathtaking flying scenes and strong female characters. It’s also a ton of fun to watch, with great set pieces — suspenseful action scenes featuring a unique setting and incredible stunts — scattered across the film.

The Story: Colonel Muska, a foppish government agent, has kidnapped a royal descendant of the Luputan family named Sheeta in hopes of obtaining her amulet. This amulet is actually a compass, which will lead him to an ancient utopian city floating in the sky that he can use to rule over the earth below. Sheeta, who possesses magical powers, befriends a young boy named Pazu, who helps her escape Muska’s clutches. With the aid of some rough-and-tumble pirates, Sheeta and Pazu aim to find this El Dorado-like city before Muska does. 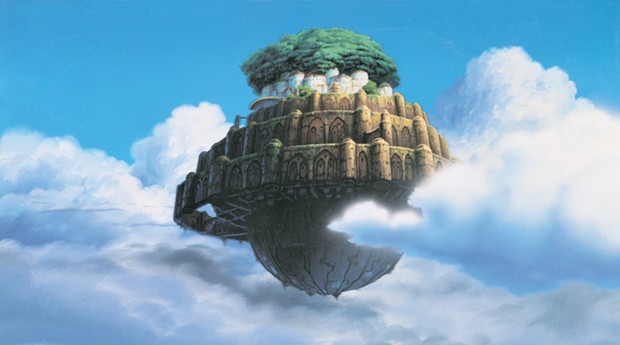 Why It’s a Good Family Movie: While much of Miyazaki’s later work features more introspective moments that punctuate the action, Castle in the Sky is a rollercoaster movie that features non-stop, rollicking action scenes. It’s an entertaining film that invokes the spirit of adventure found in movies like the Indiana Jones series. The film is filled to the brim with fantastical settings, charming characters and tense moments that will leave you on the edge of your seat.

The film also explores environmental themes. At first glance, it seems to suggest that nature is good and machines are bad. But delve deeper and you’ll find the message that it’s the person behind the machines who determines if they serve an altruistic or evil purpose.

When Pazu and Sheeta first enter Luputa and discover one of its robots (whose design clearly inspired other cinematic automatons, such as Brad Bird’s Iron Giant), it is a peaceful machine that protects animals, such as birds. When Muska wreaks havoc on the abandoned utopia, the machine turns violent. Muska, fueled by greed and power, uses technology for malicious intent, rather than to positively serve mankind. It's a riff on the classic question of whether it was actually Frankenstein’s monster or the society that shaped the monster that was truly at fault.

Miyazaki presents an optimistic angle to his story that warns humans not to give into their evil impulses like greed or power when it comes to technology. Parents can use this film as a springboard to discuss issues like responsible use of technology with their children and climate change.

Additionally, the film doesn’t paint all its villains as black and white. Many of the movie’s characters have an arc in which they realize their wrongdoings by the end of the film, and work with the protagonist to try to rectify their wrongdoings. Dola and her pirates in the film, while at first selfish, greedy and rude, quickly become better people after going on an adventure with Pazu and Sheeta. By the end, they are more compassionate.

Muska never achieves a redeeming moment, but he is a fantastic villain, able to switch from pseudo-friendliness to malicious savageness, depending on the situation. In the Disney English language dub, Muska is played by Mark Hamill (Luke Skywalker in the Star Wars movies), who gives a stellar voice performance. If you’re familiar with Hamill’s work as the Joker in the animated Batman series, then you’ll love his work here.

Age Recommendation: Action scenes involve cannons, bullets whizzing by and a fist fight. Some villains fall from great heights and it is inferred they do not survive. Characters make mild threats, such as alluding to hanging a pirate or shooting off a character’s pigtails. I would recommend this movie for ages 7 and up.