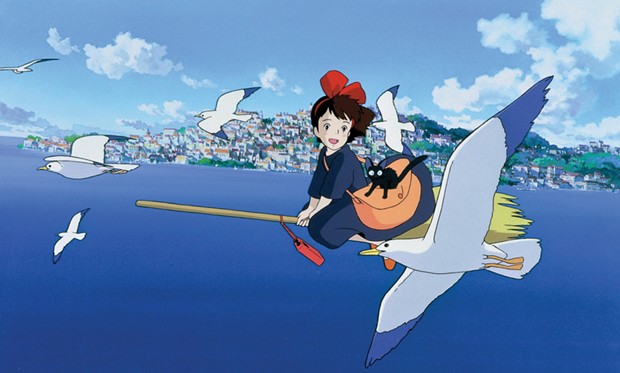 This week's movie is Kiki's Delivery Service, a feel-good film and personal favorite directed by the legendary filmmaker Hayao Miyazaki. It was made by Studio Ghibli, a Japanese animation studio famous worldwide for its fantastical anime films.

Kiki's Delivery Service is sometimes overshadowed by Studio Ghibli's more popular films like Spirited Away and My Neighbor Totoro. But viewers will be blown away by Kiki’s impressive animation and charming storytelling. While purists can watch the film in Japanese with subtitles, there is also a fantastic English language version, starring Kirsten Dunst and Phil Hartman, which makes it more universally accessible.

The Story: Kiki is a witch — a young girl who possesses the ability to fly. At age 13, witches leave their families’ homes for a year to search for a town that requires a witch’s skills — which range from fortune telling to potion making. When Kiki comes upon an unoccupied town, she establishes a delivery service in which she transports packages via broomstick. Kiki struggles with the hardships of moving to a new town, including self-doubt, ostracism and homesickness. Kiki’s situation becomes even more complicated when she begins to lose her ability to fly.

Why It’s a Good Family Movie: Kiki's Delivery Service is a rare movie in which there are no characters who act as antagonists. While some characters are rude to her, there is no clear opposing force within the movie. Instead Kiki offers a realistic depiction of life’s true antagonist: the self-doubt within ourselves. In one instance, Kiki believes the other kids who invite her to hang out with them are looking at her funny. In another, she questions why one girl in town would want to paint her if she is “ugly.” The movie may help kids going through similar issues realize that many of their worries are not as serious as they perceive them.

Kiki’s cat, Jiji, is used to represent the talkative voice inside a quiet introvert’s head. While it is unclear whether Kiki can hear her cat due to her witch abilities or if it’s purely imaginary, Jiji vocalizes the stress and doubt that Kiki bottles up inside her. Throughout the film, Jiji often comments that people she meets are snobs or the place she was given to stay at is dirty (something Kiki wouldn’t say out loud because she’s shy, polite and nonconfrontational). Jiji also serves as a source of wisdom. In one instance, the cat reminds Kiki to use her mother’s broom because it is safer than her original one. By the end of the movie, Kiki loses her ability to speak to Jiji, suggesting that she no longer needs this extra voice because she has found acceptance and wisdom within herself.

The film also conveys the idea that you should do things that inspire you, and not be swayed by whether you think you’re good or bad at it. Kiki begins to feel she’s failing at her delivery service and, because of this, loses the ability to fly. Upon realizing that it makes her happy, her flying abilities are restored. This suggests that through discovering self-confidence and doing something that makes you happy, you can thrive at what you set out to do.

Besides having a strong, complex character and a positive message, Kiki is also one of the best animated films ever produced. Pause any scene and it looks like a painting you’d find in the Louvre. The flying scenes are so well-realized that watching them will make your stomach drop.

Age Recommendation: Besides a few scenes of peril involving flight and falling from high distances — and one scene involving debris falling off a blimp and almost hitting people — there is nothing in this movie that’s inappropriate for kids. I’d recommend it for ages 4 and up.

Kiki's Delivery Service is available to purchase digitally on Amazon and iTunes, and streaming on HBO Max.