Step Back in Time at the Saint Albans Museum 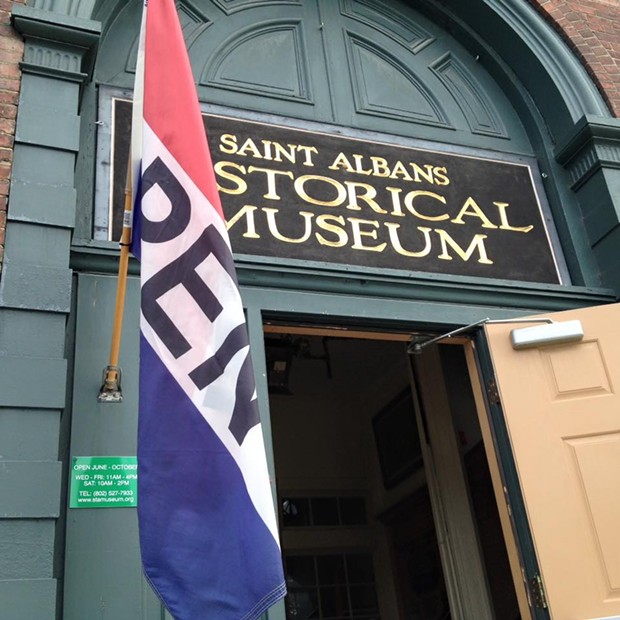 On a perfect August evening — puffy, snowball clouds, a cool breeze and the sun starting to dip — my husband and I took our 10-year-old son and 8-year-old nephew to the annual Kids Night at the Saint Albans Museum. The museum, housed in a stately, three-story brick building above Taylor Park, aims to preserve and share the history and heritage of St. Albans and the surrounding areas.

The theme of the night was a Harry Potter-inspired “Witches and Wizardry,” and the first two floors were decked out with stars, owls, maps and more. Kids could make a crown, fashion a wand and create an owl from a paper plate. They could have their faces painted or step into the photo booth and leave with a souvenir of their visit.

While my husband and I would have liked a little more time in the exhibit rooms —in particular the new agricultural exhibit — our son and his cousin were intent to zoom through at top speed. The Railroad Room and the Military Room held their attention the longest. The Railroad Room features a waiting area and ticket seller’s office, along with a model train running on a track through a tiny rural town. There are many train-related photos and memorabilia on the walls, too, like oil cans, lanterns and a conductor’s uniform. In the Military Room, soldiers' uniforms from the Civil War and earlier are displayed neatly in a glass case, while weapons  — guns, knives, cannonballs and more — cover the walls.

After a quick tour, we went outside to play a modified Quidditch game where the boys lobbed a duct-taped balloon through rings on poles — until their balloon popped.

I grew up a few miles north of St. Albans and have visited the museum several times over the years. I remember its dark, shadowy corners and that musty odor that so often accompanies historic buildings. But recently, I’ve been pleasantly surprised by the transformation it’s undergone.

The lighting is bright, the rooms are well-organized and exhibits are clearly labeled A recent grant from RiseVT, a community-based wellness initiative, allowed the museum to install play areas to engage kids in learning about history. Each station features a historic-themed activity — for example, making a fan in the women’s history exhibit or playing a “Kerplunk”-style egg game in the agricultural history exhibit. Coloring sheets, books and a scavenger hunt also keep kids interested. 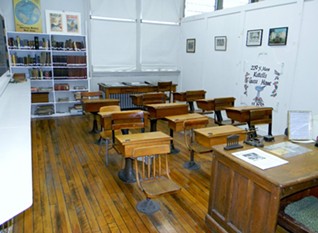 Older kids will likely gravitate toward the Medical Room, a space dedicated to medical practices of the nineteenth and twentieth centuries. Be warned: You’ll find a mannequin sporting a giant spike through its head. It's a model of Phineas Gage, a Vermont railroad worker who had a horrific accident and lived to tell the tale. Younger children will likely enjoy the historic classroom. In fact, the building that houses the museum was first used as a school. It’s easy for children to imagine themselves getting ready for class in this room: tucking lunch pails under the hard wooden seats of their desk and facing the front as a teacher wrote in neat penmanship on the blackboard at the front of the room.

As a kid, I would have been entranced by that and by the Women’s Realm, an exhibit where beautiful, lacy dresses, old-fashioned bonnets and antique gloves are showcased.

After you’ve browsed the exhibits, you can peruse the small, well-stocked gift shop where you’ll find fun items like train whistles and puzzles. Then head outside to Taylor Park to play the oversized, colorful musical instruments there: big, bongo drums planted in the ground and a giant vertical xylophone. And if you’re hungry, grab a bite at Maple City Diner (7 Swanton Rd.), just a mile north on Route 7, for another taste of classic Vermont.

Saint Albans Museum (9 Church St., St. Albans)  is open Wednesday - Friday, 11 a.m.-4 p.m. and Saturday, 10 a.m.-2 p.m. through October 4. Admission is $6 for adults, $5 for seniors, $3 for students 5-18 and free for children under 5.  The museum’s Haunted Museum Trick-or-Treat takes place on Saturday, October 26 from noon-2 p.m., and is open to all ages.
The museum is a National Endowment for the Arts Blue Star Museum, which means that admission is free for active duty military and families. The entry fee is also waived for families receiving SNAP benefits as part of the Association of Children’s Museum’s “Museums for All” program. Family passes can be checked out from libraries in Franklin and Grand Isle counties.