It’s 9:30 a.m. and the noise level at the FlynnSpace has already reached a dull roar as the last middle school groups find their seats, facing the stage. The actors and directors flank it; they’ve saved the better views for the creatives, the craftspeople, the ones for whom the day has been constructed. In other words, the students sit in the best seats in the house.

For 25 years, the Vermont Young Playwrights Festival has celebrated middle and high school voices around Vermont. The event is a collaboration of the Young Writers Project, Vermont Stage and the Flynn Center.

Rowyn Abbott-Smith finds her name in the program. As the first-place winner for Winooski Middle School, she will have a staged reading of her play; the highest honor of the festival.

Some students are excited about the cold readings. Others excitedly anticipate meeting the professional actors, who will be reading and staging their plays. Many say that they are looking forward to the staged readings in the afternoon. Students chat with each other, waiting for the program to get underway.

The house lights dim, and the voices quiet. Kids tuck their books into their backpacks. The stage is illuminated in blue and red. The 25th Annual Young Playwrights Festival has begun.

According to Cristina Alicea, producing artistic director of Vermont Stage, the purpose of Vermont Young Playwrights is to “foster the next generation of playwrights.” The program starts in the fall. Participating middle and high schools — 16 this year — invite teaching playwrights to their classes, devoting two to three full days to learning the art of playwriting. After intensive lessons and collaborative revisions, each student comes away with a 10-minute play. Vermont Young Playwrights chooses three winners per school, and those students are celebrated at the festival. This year, middle school students were honored on May 2, high schoolers on May 3. 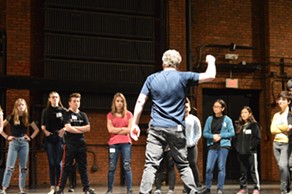 The festival takes full advantage of the Flynn Center’s space, with workshops running in different areas throughout the day. Patrick Clow, director and actor, teaches on the Flynn’s expansive Main Stage. He makes sure jewelry and phones are stowed, then introduces his workshop, “Stage Combat,” or, as he explains, “the art of telling a story — with violence.” Whereas a real fight may last for seconds, stage fights can last for minutes, he says. “The fight is a kind of story.”

Cold readings of the second place plays happen in the FlynnSpace, the Flynn’s black-box theater. Actors read their lines with animation, taking on accents, coughing like they are on death’s doorstep and even acting out bits that require visuals.

During a Q&A after each cold reading, the playwrights receive feedback from their peers, responding to questions and comments texted from the audience that are projected on the wall.

“You found my funny bone,” a comment reads for Mimi Lodestone’s The Lie. The eighth grader from Edmunds Middle School wrote a play about how a student's faked sickness leads to a comical overreaction.

While workshops and cold readings happen, actors rehearse the winning plays with directors assigned to each project, and the student playwright. Upstairs in the Hoehl studio, Winooski middle schooler Rowyn works on her play, Opposites… Don’t Attract, with director Ruth Wallman. They go through the play slowly, making tweaks to boost the comedy. The actress playing an exasperated, lying business woman suggests a bit of physical humor to show her increasing frustration: beckoning the flight attendant closer and closer to ultimately yell in her face, “Upgrade me to first class!” The edit makes it into the final performance.

Vermont Stage’s Alicea talks about why she considers playwriting and theater a crucial part of education. “It’s about putting yourself in another person’s shoes,” she says. “Theater is art that teaches empathy… The world needs much more of that these days.”

In the afternoon, students file back into the FlynnSpace, still full of energy. The house lights dim. The stage brightens with red and blue light.

The performance takes around two hours. The actors are fully devoted to each scene, switching between characters seamlessly. Some performances are hilarious. Others are sad and reflective. Many are both.

Rowyn’s characters in Opposites… Don’t Attract are fully developed and clash comically with one another. A stereotypical hippie gets angry at a burping fast-food lover, and yells out, “It’s not cool to stereotype, man!”

Rowyn’s teacher, Heather Win, sums up the experience of watching the performances. “I can’t believe a kid wrote this,” she says.