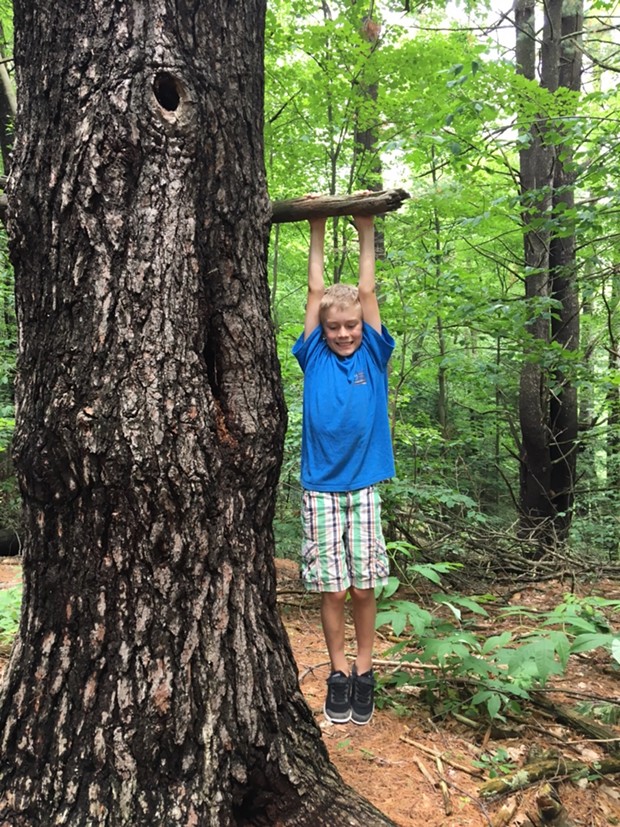 Many moons ago — somewhere in between our honeymoon and mooning over the birth of our first child, Dillon — my husband, Carlton, and I would often walk the trails of the East Woods in South Burlington. Since then, we’ve sipped coffee at nearby Klinger’s and run the South Burlington Recreation Path many times, but for some reason this 40-acre forest had slipped off our radar.

Until late last month, that is, when my 8-year-old son Harper, and I decided to kill some time in between his noon pick-up from a rocketry camp in Shelburne and Dillon’s later bus drop-off from Girl Scout Camp in Richmond. Heading north into South Burlington, we turned left on Swift Street and parked the 4Runner in the pullout for a brief amble through an area that most people whiz by on their way to and from work.

Besides a single car, occupied by a man typing on his laptop, Harper and I were the only ones there on that warm summer day. I had done some research, learning that UVM purchased this swath of land in 1949 with the intention of preserving it. As we entered the trails to explore the 1-mile loop, I read part of the trailside sign to Harper, explaining how the Potash Brook that we would soon see had got its name.

The conversation failed to flow as rapidly as the brook, swollen from the recent rainstorms and running its muddy course toward Lake Champlain.

“What do you like about walking in the woods?” I asked. “I don’t know,” said Harper.

Silence ensued as we looked up at the tall pine trees and down toward the mossy forest floor. Then it hit me.

“What would you name the dog?”

“Well, it depends. If it were a Portuguese water dog, it would be Portchy. A Lhasa Apso, Mr. Hairy. A whippet? Whipped cream.”

And so we talked about dogs, and names for dogs and life ahead, and then, once more, we left the East Woods in the past and headed into the future.