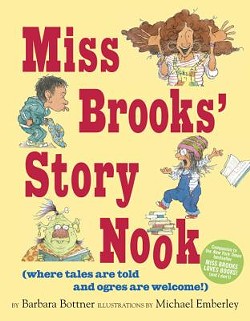 In her own book nook tucked into the corner of the Morristown Elementary School library, the school librarian Liv Perry reads Miss Brooks' Book Nook to 15 fourth-grade students. After this, there's only one more 2015-2016 Red Clover Book Award nominee for Perry to share with the kids before they vote for their favorite.

Each year, ten picture books published the previous year are selected by teachers and librarians in Vermont as new nominees. During the month of April, students in kindergarten through fourth grade pick their top choices  and a winner is announced in early May. The program is jointly sponsored by the Vermont Center for the Book, the Vermont Department of Libraries and the Vermont Agency of Education.

Miss Brooks' Book Nook tells the story of a young girl named Missy whose library class helps her dream up an imaginative tale about a snake to give a bully a taste of his own medicine As Perry reads to the kids, she helps them make connections between this story and the previous Red Clover titles they've read.

"What other book do you see a map like this one?" she asks, her finger tracing Missy's alternative route to school to avoid the bully.


When she's finished, the librarian turns the students' attention to the large screen suspended on the wall in front of them that displays her Red Clover webpage. She plays them a catchy song related to the story, clicks on the website of a storyteller who visited the school in the fall to make a point about the art of storytelling and shares sketches by the book's illustrator, Michael Emberley. The kids squeal at an image which didn't make it into the book — a snake swallowing the bully whole.


As the kids roam the library to choose books, Perry explains what she likes about the Red Clover awards.


“It is Vermont-wide, so if kids move around to different schools, that’s something they have in common with kids in their new school," she says. "It’s a collective experience."


Which Red Clover books are popular with this class? One student, Harley, plans to vote for Shhh.. We Have a Plan because she liked how in the illustrations the "people didn’t look like people." Another student, Kiley, thinks Blizzard is the best because it was based on a real story. Her friend, Lucy, preferred Lindbergh: the Tale of a Flying Mouse. “I like the idea of a flying mouse,” she says, “because I like engineering and stuff and there’s definitely a lot of that.”