Will You Go Out With Me?: Dance Like Nobody's Watching 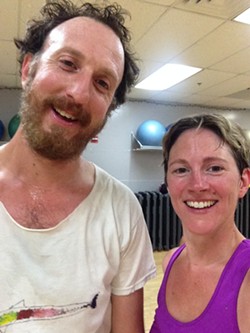 Just when you think you know everything there is to know about the man you married, you hear these word come out of his mouth:  “Sure, I’ll take a Sh’Bam class with you.”

As in, a dance-y, aerobics class taught at the Edge in Williston. This adventure met our agreed-upon date criteria in every way — especially the “outside our comfort zone” check box. I mean, yes, I was a dancer in high school. But I’ve never been one who is inclined towards group fitness classes (excluding yoga, which really doesn’t even count). I think it’s because I used to dance that I find this sort of class makes me feel bad about myself when the steps don’t come easily.

Ryan has taken exactly one group fitness class — at SoulCycle in LA with a friend —  which he called “hilarious.” He has never taken a dance class, which is why I would have bet good money on him saying, “No flipping way!” to the Sh’Bam idea.

The day we were scheduled to go on our date, our daughter, Lio, came home from school with a fever and spots all over her body. Sh’Bam was postponed in favor of a trip to the pediatrician’s office. I thought for sure Ryan would reconsider in the intervening days, but when the next opportunity came around, he was still game.

Funny thing is, I was nervous; the kind of nervous I felt when my older sister and I went scuba diving in the Great Barrier Reef and she was puking over the side of the boat the whole bumpy ride out there while we were supposed to be learning how to scuba dive. It was that special brand of nervous you feel for other people.

“We can do something else if you want,” I offered on the morning of our date.

Did I think Ryan wouldn’t be able to do it? That he wouldn’t pick up the choreography? And then what? He’d be frustrated? Big deal! The man can handle a little frustration. So where was this anxiety really coming from, I wondered.

One great side effect of nerves for me is that they temporarily turn me into a person who arrives early for things. We got to the gym 20 minutes before class started, which gave Ryan and me plenty of time to make jokes about being "that couple" that exercises together. As we laughed at our assumed ineptitude, I felt my nerves smoothing out and the little knot in my tummy coming undone.

“Do you get nervous before doing new things like this?” I asked Ryan. And in that moment, I realized we’d never had this conversation before. We’ve talked about how he feels before going on stage or appearing on TV, but those are things he’s used to. They’ve been part of his job for more than two decades. What about this sort of thing — where you’re not sure if you’re going to be any good? As adults, we don’t often choose to put ourselves in that position, though it’s something we did on a daily basis as kids simply because everything was new.

“Nervous? No. There’s nothing at stake, really. I’m uncomfortable but amused,” he replied.

Ryan was right. There was nothing at stake here and no reason to feel anxious. So I let go of any care or concern for how we were going to “do” in the class; I gained a better understanding for how my husband approaches new experiences; and I felt deep compassion for our children at this time of year when there’s new-ness around every corner at school. That’s a lot of bang for your date night buck, and the Sh’Bamming hadn’t even begun yet!

To prepare, Ryan and I awkwardly stretched our legs and did that thing where you hop and shake your arms around like you’re a boxer. When the instructor, Brad, donned his headset and fired up the Beyoncé, we were so ready.

Most of the other 20 or so women in the class had clearly been there before. They were at least familiar with the steps, and some even made it look easy. Brad called out each move in time with the Top 40 beats we were dancing to: "Tap two, step two, in 4, 3, 2, 1." I could feel my lips moving as I repeated his directions in my head.

The idea is to learn a different combination of moves during each song so that even newbies like us can start to feel like they know what's coming next. The steps start out really basic (walk forward) and get increasingly more complicated (step two, turn two, shuffle back, add in the arms!) as the class progresses.

Over the course of 45 minutes, I spent about 17 percent of the time looking at Ryan to see how he was faring, but mostly I joyfully gyrated my hips and step-hopped my booty around that floor with a silly grin on my face. I definitely didn’t look anything like my heroes on “So You Think You Can Dance,” but I was having some grade A F-U-N.

And Ryan, man… he was shimmying with the best of 'em! Apart from the (very talented) instructor, he was the only dude in the room and he represented his gender well. His shoulders rarely relaxed and he was often on his heels when he should have been on his toes, but none of that mattered even a little bit. Every time I snuck a glance in his direction, I felt proud. See that man working it out to some Justin Bieber? That’s MY man!


Sh’bam happens every Thursday at 5:30 p.m. at the Edge in Williston. It’s free for members. Non-members can take the class by paying the $15.00 guest fee.

working out Will You Go Out With Me? date night marriage exercising Sh'Bam
Prev
Next