Get Out!: The Island Line Trail 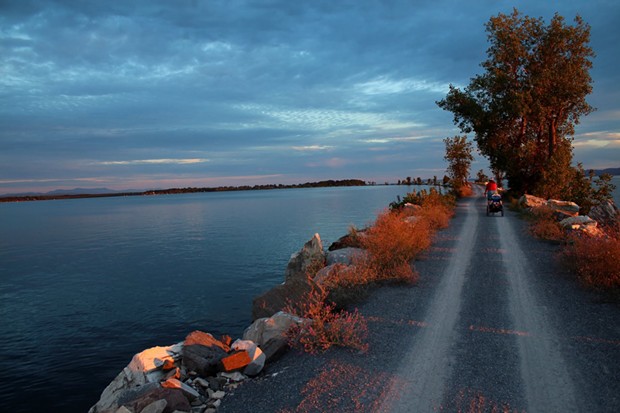 As cyclists-turned-parents, Tristan and I enjoy touring Vermont's many excellent off-road bike paths — like the Stowe Recreation Path, the Cross Vermont Trail (between Plainfield and Wells River), the Burlington Recreation Path and the Lamoille Valley Rail Trail — with our 9-month-old daughter, Elise. But our favorite so far is the Island Line Trail. It runs 4 miles each way from Airport Park in Colchester to the end of a causeway that juts out into Lake Champlain. (Cyclists can go even farther into South Hero with the Local Motion Bike Ferry.)

On a recent summer evening, Tristan and I pulled into Airport Park. We loaded Elise into her bike trailer, which was attached to my bike, and headed north on the path. The park was bustling with kids and families playing baseball, having picnics, and playing on a well-equipped playground. As we pedaled north, we met people going in both directions. Some were serious cyclists zooming along at top speed, while others were more casual riders, like a young couple on a date and several fishermen biking with their poles sticking out behind them.

We pedaled through a suburban neighborhood, then a lakeside community, and finally onto the causeway, which is a built-up path that runs on a flat, repurposed railroad bed into the middle of the lake. The path has water on both sides, and we noticed wildflowers tucked in among the rocks lining the trail and big, beautiful trees clinging to small patches of ground. Birds flitted all around us as we rode by.

We made it out to the end of the causeway, where there is open water for boats to pass through and a small ferry that connects cyclists with the causeway on the other side, which continues on to South Hero. The ferry was not operating that evening, so we stayed put and watched and waved as boats went by. As the sun started to set, we loaded back onto the bikes and began our return ride to the park. As we pedaled along, the sun was getting very low over the Adirondacks. At first, I thought we should rush to get back before dark. But then, after I remembered there is some daylight left after the sun goes down, it occurred to me to stop and enjoy the sunset.

As we watched the sun dip below one of the tall peaks in the Adirondacks, we oriented Elise in her trailer so that she could see, too. She held on to the ear of her stuffed bunny as she watched her first waterside sunset. I took the moment to feel centered and peaceful and Tristan, the photographer among us, took as many photos as he could squeeze in before the last light disappeared. It was a beautiful family moment.

We headed back and arrived at our car at twilight. We loaded a sleeping Elise into the car and decided to head to The Skinny Pancake on the Burlington Waterfront for a late dinner. We topped off our night with live music, sweet potato fries and crepes while a now-awake Elise banged her hands on the table. It was a trip we'd highly recommend to any cycling family!