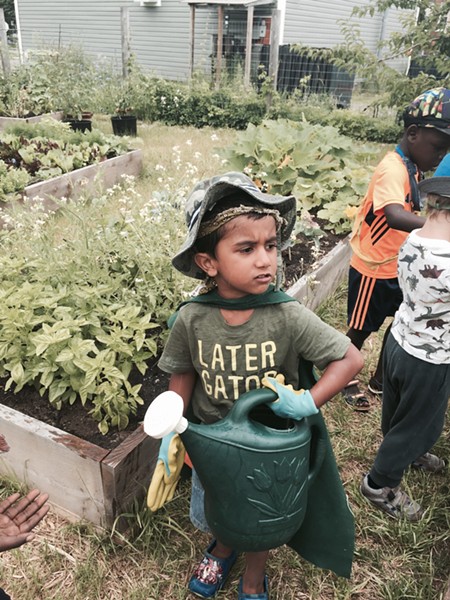 It's morning meeting time in the Blue preschool classroom at Burlington Children's Space. Eleven kids wearing sandals and sun hats sit in a loose circle on the classroom floor, wiggling around as they practice a song with guidance from one of their teachers, Meghan Laskowski.

When the song ends, it's time for the 4- and 5-year-olds to transform into Helping Heroes. Several kids grab felt capes and headbands and belts fashioned out of fabric remnants. In the hallway, all of them put on stretchy gardening gloves and line up, holding hands with a partner.

The Helping Heroes program — which their other teacher, Charles Winkelman, describes as a civic-oriented curriculum — began this spring. The children designed and sewed their own superhero costumes, which they wear to clean up trash in the neighborhood. A micro-grant from the ONE Good Deed Fund paid for gloves for each child and a wagon for pulling along supplies and collecting trash.

Outside the classroom, a flyer is thumbtacked to a bulletin board, advertising the Helping Heroes Hotline. "We are here to help!" it states."If you ever need us when we're gone, leave a message on our phone."

"We can clean up your garbage for you. We can show you the tree pose," the flyer continues. At the bottom, the children have signed their names in all caps with markers.

The preschoolers follow Winkleman out the doors of the McClure Multigenerational Center, a building in Burlington's Old North End that houses BCS as well as the Champlain Senior Center.

"Which way should we go today?" asks Winkleman, gripping the handle of a wagon containing a trash bag, bucket and backpack. The kids motion to the right, and the group sets off on North Winooski Avenue.

Winkleman reminds the kids of their mission: Pick up the trash they see, and get an adult to help if they see something sharp, like glass or needles. As they walk down the block, then turn on to a side street, the kids keep their eyes on the ground, periodically crouching down to pick up candy wrappers, bits of broken plastic, little pieces of paper and cigarette butts, which they throw into the wagon.

These regular outings have made the kids more observant of their environment and helped them to understand what it means to keep the neighborhood clean, says Winkleman. Often, they turn into impromptu scavenger hunts, with kids looking for particular items — say, scratch tickets.

The kids' excitement is audible as they discover things along their route.

"I found some foil!" announces a boy with two missing bottom teeth, holding the shiny scrap between his gloved fingers.

"I don't want to smell that!" says another boy sporting a fabric sash around his neck as Winkleman fishes a particularly stinky looking food container out of the bushes several streets down.

As they pick up trash, several kids notice the dark clouds in the sky and worry aloud about an impending storm.

"We gotta make it to the garden before it rains," says Winkelman.

Only a few drops have fallen by the time the class arrives at the Archibald Neighborhood Garden, where Burlington Children's Space has two raised beds brimming with cabbage, basil, cauliflower, pumpkins, corn and tomatillos. Everyone takes off their gloves, then several kids scamper to the back of the fenced-in area to fill watering cans from rain barrels, while others crouch down to look at what's growing and sample some of the bounty.

The Helping Heroes program teaches kids how to work together and care for the community, and gets them excited about helping others, says Winkleman. It also encourages interaction with the surrounding community. "I'd like to believe that at the very least the children brighten up someone's day," says Winkleman, or "maybe even inspire them to go out and help the community on their own."

After about fifteen minutes in the garden, the rain is coming down hard and Laskowski and Winkleman make the executive decision to head back to school. They turn around the wagon — now filled with a bag of trash, 11 pairs of little gardening gloves and a motley assortment of veggies —  and head back to school.