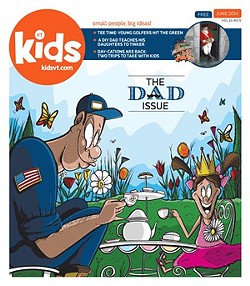 For the fourth year in a row, Kids VT took home top prizes in the annual Parenting Media Association’s Design and Editorial Awards Competition, which recognizes excellence in journalism, photography and design at member publications.

The PMA presented the awards last Saturday at its convention in Baltimore, Md. A panel of judges awarded Kids VT first-place “gold” in its circulation category for:

Kids VT also won a “silver” award for “The Art Of” column by Alison Novak; and a “bronze” award for Best Overall Design. The judge in the Best Overall Writing category praised the “lively writing” in each issue of Kids VT: “From the highly personal editor’s note to the regular ‘Go Ask Dad’ segment, these writers set an excellent example for the kids who are learning to, as the title of the closing essay suggests, ‘Use your words.’”

This is the fourth year Kids VT has entered the competition since the magazine was purchased and redesigned by Seven Days. We're thrilled to be recognized!