Hour of Code Proves No One's Too Young to Program

Anybody can learn computer programming. That's the message from the nonprofit code.org, which launched its second annual Hour of Code this week. The campaign encourages schools to introduce students of all ages to computer science.

Over the last year, more than 59 million students worldwide have tried the Hour of Code, according to code.org's website.

In Vermont, 212 schools are participating in Computer Science Education Week this year, up from 120 last year. Seventy-seven of those schools are offering coding instruction to their entire student body.

Peter Drescher, education technology coordinator for the Vermont Agency of Education, attributes the uptick in participation to the rising interest in STEM education and the maker movement. People are starting to realize that kids who can code will have more career opportunities as adults, Drescher says.

The vast majority of U.S. schools

don’t offer formal computer-science instruction. That's why code.org — which is backed by tech giants including Amazon, Google and Apple — provides free, kid-friendly coding tutorials and lesson plans on its website.

Kids can use the programming language Blockly to drag and drop visual blocks, and to write code that draws shapes or makes characters navigate mazes. This year, a tutorial featuring Anna and Elsa from Frozen joins last year’s Angry Birds- and Plants vs. Zombies-themed lessons.

Orchard School, a public elementary school in South Burlington, won a $10,000 technology grant from code.org this year. The nonprofit gives these grants each year to schools — one in each state — that involve their entire student body in the Hour of Code.

Donna Sullivan-Macdonald, Orchard School’s librarian and technology integrationist, says she's consulting with other educators before deciding how the school will use the grant money. This week she held back-to-back coding sessions in the library for each of her 20 kindergarten through fifth-grade classes.

On Tuesday morning, a fourth-grade class let out cheers when Sullivan-MacDonald announced it was Hour of Code day. She played them a code.org video, featuring celebrities from Bill Gates to Ashton Kutcher to Barack Obama. “Don’t just play on your phone, program it,” the president proclaims.

Sullivan-MacDonald had planned for students to use the code.org Frozen and Angry Birds tutorials, but the site was slow to load, a problem many Vermont schools faced this week, according to Drescher from the Agency of Education. That's one downside to the initiative’s popularity.

Luckily, Sullivan-MacDonald had a back-up plan. She pulled up another computer-programming site, Tynker, on the Smartboard and showed the kids a beginner-level game called Puppy Adventure. Then she let students explore coding activities on their own computers. 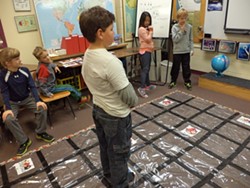 Ivan Minier, 9, tried his hand at Puppy Adventure, dragging and interlocking command blocks to help Pixel the Puppy move forward and jump over different objects to reach a goal. Ivan learned to code during last year’s Hour of Code, he said, and sometimes uses the programming language Scratch at home. “I really like coding,” he said. “It sort of surprises you what happens.”

What does Minier think about the fact that many schools in the U.S. don’t have computer-programming classes? “I find that a little sad because I’m really interested in technology,” he said.

In Sullivan-MacDonald's next class, code.org was up and running again. Second graders worked through the Angry Birds tutorial in pairs. Ava Desautels, 7, and Govinda Pradhan, 9, worked together to make their Angry Bird navigate an obstacle-filled maze to reach its target: a green pig. As the tasks got progressively harder, they had to confer with each other to figure out where their code had gone awry, revise it and try again. When they finally succeeded, they clapped and whooped with glee.

Coding isn't just about familiarizing kids with computers, says Sullivan-MacDonald, it's about learning to collaborate and solve problems. She plans to extend the Hour of Code well beyond the introductory hour at Orchard School. She'll continue offering coding lessons during library time through the rest of the school year.