On the Fly: When Plans Go Awry 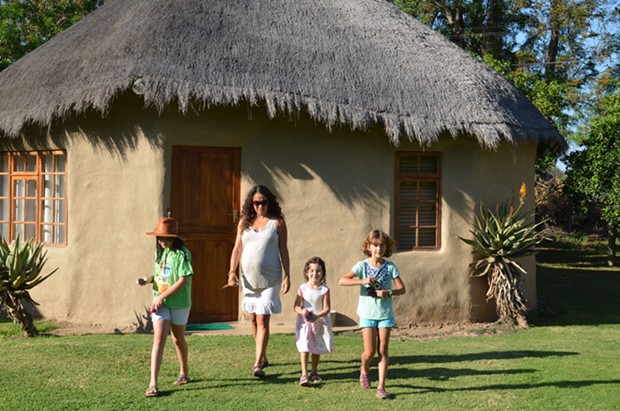 The fog surrounded us as we drove. Adam and I leaned our faces close to the windscreen, trying to see a few feet in front of us, making sure we didn’t run over a cow, a herd of goats or a person walking in the road.

We had been driving for hours through the Transkei, the rural part of South Africa's Eastern Cape, past the Xhosa village Qunu where Nelson Mandela grew up. This was our last week in this country. We wanted to show the girls more of South Africa than just Eurocentric Cape Town.

As usual, we hadn’t fully read the directions to our destination: an eco-village run by the local Xhosa community. And we underestimated how bad the weather was when we started off.

We were still on a high from the last few days. We'd stayed in a rondavel – a traditional Xhosa thatched-roof round hut made from mud. We'd seen elephants and zebras and other African animals on safari. We'd toured Robben Island and the black townships, and seen intense poverty in squatter camps with shacks made from corrugated iron. We'd watched  a dance performance at a local theatre, visited beautiful beaches and seen sunsets in posh neighborhoods. We'd hiked Table Mountain, walked through picturesque Afrikaans towns and swum with African penguins. We had spent time with friends and family of all races and backgrounds. Now it was time to get out of the city and see the countryside. 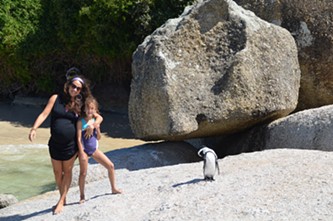 We set off after breakfast just as the fog was rolling in. After several days of burning-hot sun we were grateful for the refuge of the cool, wet day. However, five hours into the drive we were still hours away from our destination.

If it had just been Adam and me, we would have set up a tent when the sky grew dark and camped wherever we ended up — just as we did in this part of the country 16 years ago.

Not this time. I'm now seven months pregnant, and we had three hungry, tired children — and no tent — in the back seat. Moments like this reminded us that we were no longer carefree twentysomethings. When we decided to bring the children along, we took on responsibility and sacrificed some freedom.

The sky was getting darker by the minute, the rain blowing more strongly. Finding our way onto dirt roads with only landmarks as directions was complicated. The eco-village had explicitly warned us not to attempt this road after dark. But in this weather, there was little chance we would make it before complete darkness.

We didn't have a phone, GPS or any other working device within reach — we'd made an effort to disconnect from technology while in rural South Africa. There was nothing for the girls to do but use their imaginations and look out the window. That's what my three sisters and I used to do during long car rides with my parents. If I could do it, surely my kids could handle several hours with no devices.

They could. They sang songs and made up games. They were in their own little bubble.

However, Adam and I began to second-guess ourselves when we realized, with slight panic, that we weren't going to reach the eco-village. Night fell quickly and there was no phone or internet to check for other accommodation options, no hope of a random inn or guest house in this isolated area.

What if the car broke down? What if we had an accident? What if I needed to get to a hospital quickly? Would we have to spend the night in our car? How safe could that be?

I didn’t speak these questions aloud, but I knew Adam was thinking them, too. We felt more discouraged and nervous as each hour passed.

Usually our impulsiveness works to our advantage. But this time we felt naïve and perhaps even irresponsible. As the darkness settled in, the girls went from being restless and bored to somber and serious. They sensed our mood and knew the situation was not good.

We stopped at a store in a tiny village and asked the clerk of we could use a phone to call the eco-village. But the store had no phone and knew nothing about our destination. We carried on because... what else could we do?

We had a basic map, and having traveled this route 16 years ago, we knew that at the end of this long, terribly muddy, isolated, potholed road, we would reach the Indian Ocean. There, we'd find a very small town called Coffee Bay.

This was our only alternative. We had come too far to turn around and were too exhausted and hungry to do anything but look for the nearest shelter and food. We pinned our hopes on finding available accommodation for a family of five.

It was 7 p.m. when we pulled into the small cove of Coffee Bay, but it might as well have been midnight. We followed signs to a place called “Ocean View Hotel,” got out of the car and heard the ocean roaring. We saw people eating dinner in a brightly lit room. Gratitude flooded through me.

In retrospect, I think things worked out as they should have. We had planned to go to a South African eco-village with traditional food and villagers who could show the girls about rural Xhosa life. Would they have learned something? Would it have felt contrived? Was it as authentic as it sounded? I will never know. But I do know that the lessons you learn when plans go awry can be equally, if not more, valuable.

I can’t describe our joy and relief upon ending up at the small hotel. We were truly grateful for our safety, shelter and food. What better way to understand the importance of those basic needs than getting stuck after nightfall in a foreign country, with no one to call for help?

Kids VT contributor Jessica Lara Ticktin is traveling the world with her family, homeschooling three daughters along the way — while pregnant. She’s documenting her family’s adventures until they return to Vermont in December.