Local gamers raised $15,705 for Vermont Children’s Hospital, and Extra Life participants around the country collectively raised $5,102,500 for the Children's Miracle Network. Still want to participate in Extra Life? November 15 is the local make-up date for gamers who missed the big event last weekend.

While 8-year-old Noah Cohen was in the middle of the gaming marathon, his mom, Amy, wrote about what the fundraiser meant to her family:

It's 3 in the morning, and I am sitting on the couch playing PlayStation 4 with my 8-year-old son. He was been gaming for 19 hours straight so far, and while occasionally I can hear the faint criticism of the textbook parent in my head who might be questioning the judgement of this decision, when I look over at my son, I am bursting with pride. So much about who he has become awes me, but tonight (or this morning, I suppose) I am amazed by the seriousness with which he approaches his task.

He is in the home stretch of the Extra Life 24-hour game-a-thon to support the Children's Miracle Network, and while I am clear that this is not a hardship (playing video games for 24 hours might, in fact, be his dream come true), he has done so much to prepare for this occasion — from deciding what he wanted to share on his fundraising page, telling others about Extra Life and asking for donations, raising more than $4,000 to date, articulating his desire and expectation to game for the full 24 hours like the majority of Extra Lifers and, finally, mapping out his "game plan" for the day.

It's impressive. And I love that through it all he continues to remember and share his real reasons for fundraising and playing today. It's for the kids. It's because he loves Vermont Children's Hospital, our local Children's Miracle Network Hospital, and he, like his parents, is grateful for the exceptional care he has received there in his 8 eventful years. It's deeply personal for us.

I am even more moved by the fact that at this moment there are 49,264 others across the United States and Canada awake and doing the same thing, all to support the 170 Children's Miracle Network hospitals in North America. Some of these self-professed gamers also have a personal investment in the cause while others have had less direct experience yet understand the power of doing what they do best to support the well being of sick and injured kids. And together we have raised $4.3 million so far.

It's astounding and inspiring. Yet I will admit, it's late and I am growing tired and so I think of the few times I have pulled an all-nighter in my life, and the only instances I can think of are nights I have stayed awake while my son was in the hospital.

I think of the many ways that Children's Miracle Network funds have made those difficult nights and the hospital stays surrounding them easier — from medical equipment to hospital-room furniture to child-life services without which our hospital experience would not be same. And so we play on with the knowledge that so many children and families will benefit from this sleepless night.

If you have the opportunity to support the Children's Miracle Network and your local children's hospital, I urge you to do so. Your contributions will make such an tremendous difference in the care children receive. And their families, like mine, will be forever grateful.


Gamers get a bad rap sometimes. But this weekend, many of them will be glued to their screens for a great cause.

On Saturday, October 25, thousands of people around the country are participating in a fundraiser called Extra Life, a 24-hour gaming marathon to benefit Children's Miracle Network Hospitals. So far, 126 Vermont participants have raised $7,621 for Vermont Children's Hospital at Fletcher Allen.

Nearly half of that money has come from an 8-year-old from St. George named Noah Cohen. Since early September, he has raised $3,500.

Cohen has a special relationship with Fletcher Allen. Born with a rare variety of congenital anomalies, he has undergone 23 surgeries and seen more than a dozen specialists there. 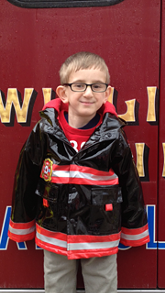 His mom, Amy Cohen, has always encouraged Noah to put his medical challenges in perspective. "Part of our family culture is just wanting to be sure that Noah recognizes that there are other people who have gone through just as much as he has, and there are some who have it worse."

The family had recently started fundraising for the hospital when Amy heard about Extra Life. When she told her son about it, he thought it sounded awesome.

Noah, who started gaming during a long hospital stay last year, likes the Sims games, which simulate real-life situations. But he especially loves medical games such as Emergency Room: Heroic Measures, in which the player gets to experience what it's like to be a paramedic. "He has a fascination with ambulances," says Amy. "He'd like to be an EMT when he grows up."

Though Amy admits she's ambivalent about her son's newfound love of gaming, she says Heroic Measures has taught him a surprising amount of medical knowledge and improved his fine-motor skills.

How did an eight-year-old manage to rustle up so much cash?

"He’s definitely not shy," says his mom. "He’s been telling everyone he knows about the fundraiser and asking them if they’ll sponsor him."

Amy has been trying to convince Noah that because he's younger than most of the other Extra Life participants, he should split up the 24 hours of gaming over the weekend. But Noah insists on playing the full day, just like everyone else. His argument? "It's for the kids!"

Many of the Vermont participants will be gaming at Tilt Classic Arcade and Ale House in South Burlington from 8 a.m., Saturday, October 25, to 8 a.m., Sunday, October 26. Want to get involved? Sign up to participate and/or donate here.