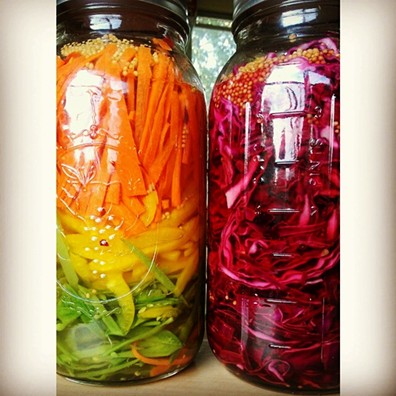 Maybe you already love canning and pickling veggies. Maybe, as a kid, you learned the technique from a relative. Many Vermonters I’ve met in the 15 years I’ve lived here seem to have a preserving guru in the family. Mine did not.

Growing up in upstate New York, I spent plenty of time at the farmers market with my grandma. But she wasn’t a pickler, so neither was my mom. The first time I tasted a dilly bean here in Vermont, I felt sure I’d never tasted anything like it.

I loved it, but felt totally intimidated by the idea of pickling anything myself, especially in my tiny apartment kitchen. Pickled veggies were a treat I would enjoy — after they were prepared by someone else.

Fast forward a decade to a snack workshop at the Burlington Children’s Space presented by City Market’s Food and Nutrition Education Coordinator Caroline Homan last year. I looked over the list of recipes we’d be learning and was intrigued by the Sunshine Pickles. Technically, these aren't pickled; they're lacto-fermented, meaning they’re preserved in a simple brine of water, salt and spices. The process was beyond easy. We made them that day, and they were so tasty, I became obsessed with this form of pickling for the rest of the summer. At home, the kids and I made jars of carrots, green beans and cucumbers and snacked on them for weeks.

Soon we felt emboldened to try out a slightly more ambitious pickling method. I turned once again to my personal cooking guru, Deb Perelman of The Smitten Kitchen. Her recipe was a bit more work than the Sunshine Pickles, but still simple enough to encourage a novice pickler.

Using a half-gallon jar, I created a job for my 10-year-old: piling the sliced veggies in colorful layers. The result was amazing.

In her original recipe, Perelman writes to prepare yourself for a total cooking paradigm shift before making pickled veggie slaw. Once you've had it, she writes, you'll want to put it on top of everything, all the time. She’s right.

So, I share with you two delicious pickling ideas, adapted from two of my favorite recipe makers. Both can be made with just about any crunchy veggie you have on hand and, best of all, neither involve canning, vacuum sealing or sterilized jars.

Heat the vinegar, sugar, salt and mustard seeds in a small, non-reactive pot over medium heat until the mixture starts to simmer. Stir, but only until the sugar and salt dissolve. Then stir in the water and let the mixture cool to lukewarm.

Divide vegetables between jars. Two quart mason jars will do the trick; I doubled the recipe and used two half-gallon jars.

Pour the vinegar mixture over vegetables and refrigerate until you’re ready to eat them. The veggies will be delicious and gently pickled within an hour, and really pickled after refrigeration overnight. You can expect them to taste a little more intense over the next few weeks, but never too strong. As long as you keep them submerged in liquid, the veggies will keep in the fridge for up to a month — though they've never lasted more than a week in our house.

Eat these with absolutely anything. Really. I love to add them to sandwiches, tacos, rice and beans, green salad and roasted potatoes, or alongside grilled meat of any kind.

1 pound small pickling cucumbers, carrots or green beans (You could mix them but, unlike the slaw recipe, I like to keep these in separate jars.)
1 tablespoon salt
1 teaspoon pickling spice mixture
1 teaspoon dill seed
1 quart mason jar with lid (You can multiply the recipe for as many jars as you’d like to fill.)

Fill your jar with as many veggies as you can! Really pack them in.

Add salt and any herbs or spices you want to use. I used dill only, and they were delicious, but several of my co-workers used the ready-made pickling spice mixture available in the spice aisle of the grocery store.

Fill your jar with water until it covers the vegetables, leaving about ½” space at the top. Screw on the lid and shake the jar well to dissolve all the salt. (This is a great kid job!)

That’s it. You’re done. Put the jar on the kitchen counter for two to five days, pressing vegetables below the brine with your fingers or a spoon each day. Taste them after two days and see what you think. If you like the level of pickle-ness, start munching! Or let them keep fermenting on the counter for up to five days. Once they’re perfect for you, store them in the fridge. They’ll keep there for several weeks, but I bet they won’t last that long. These are a delicious, different, refreshing summer snack.