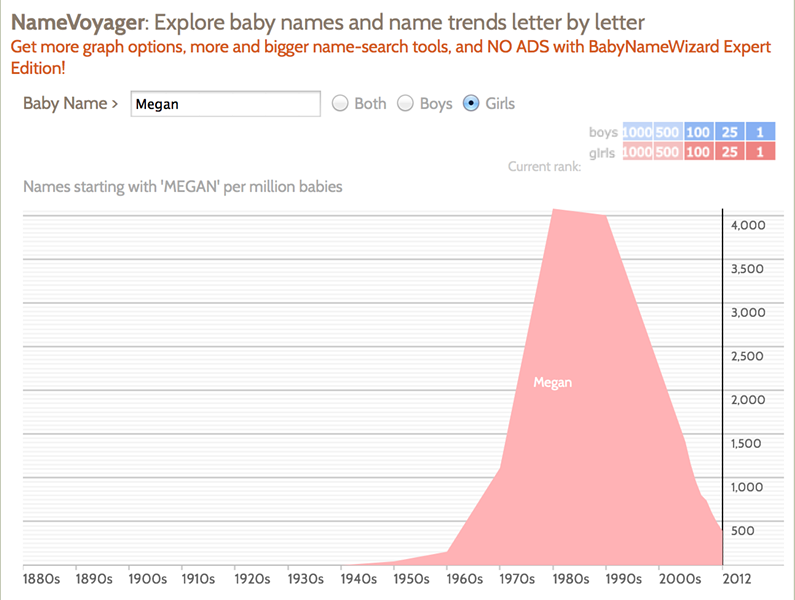 I don't give much thought to my own name on a daily basis. So why do I worry so much about finding the perfect name for my child?

My mom's choice — Megan — didn't have any family connection. It wasn't a name she had always loved. Megan seemed to come to her on a pregnancy-hormone-induced whim.

My mom spent the month leading up to my birth, in 1983, watching — and weeping through — the romantic TV miniseries The Thorn Birds. She named me after Meggie Cleary, the beautiful young protagonist who falls in love, tragically, with a priest.

I was never crazy about Megan. I thought it was boring — perhaps because, as you can see in the chart at right, everyone else born in the '80s seemed to share it with me.
That chart comes from a website called The Baby Name Wizard, which features an interactive Voyager tool that tracks the popularity of names over time. When you're a parent-to-be searching for that unique-but-not-too-weird name for your baby, it's totally addictive.

But it can also be overwhelming. The longer my husband and I searched for a name, the more the whole process seemed arbitrary. We were looking for something elusive: a moniker that avoids bad associations (middle school mean girls, exes, etc); sounds great with his last name (Houghton); isn't too pretentious, and isn't part of a name fad. Bonus points if it references a far-flung ancestor or a favorite movie or book.

Most importantly, it has to feel good coming out of our mouths. After all, this is a name we'll one day find ourselves cooing with affection and screaming with rage. We want to get it right.

So, to start, we dug back into the family history. My maternal great-great uncle takes the cake for ridiculous names: Cadwalader Ford. Later generations of his family refer to him as "Cat Swallowed a Board."

Then again, on my dad's side, there was Zeppelina Clark, who was born in England in 1916, the night of the German zeppelin raid on London. One of the blimps was shot down in a field near the hospital in Essex where Mrs. Clark was giving birth. The doctor delivered little Zeppy in the glow of the fire and suggested naming her after the event.

Here are a few of the names we've considered — and rejected. 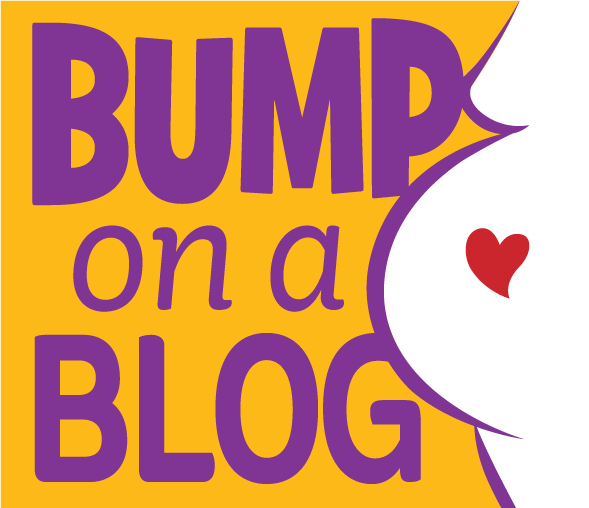 Madeline. No sooner had we fallen in love with this name than a childhood friend gave it to her new baby girl. We suddenly started seeing and hearing it everywhere. Same problem with Harper and Jasper.

Huckleberry. OK, this one is just silly — Huckleberry Houghton — but kind of cute! We stumbled upon it while dredging up characters from our favorite books (The Adventures of Huckleberry Finn). Maybe we'll save it for the first family dog.

Anne. For Anne Shirley of Green Gables, of course. Bonus family connection: Daniel's grandmother was named Anne. It's simple and classy, but kind of boring.

Roma: My great-grandmother's name. Daniel shot this one down pretty quickly. "It's a tomato name," he said.

The best name came to us all of a sudden. I'll resist the temptation to reveal it here. But it's a good one: simple, sweet and strong. And free from blimp associations. And, according to the Baby Name Wizard Voyager, its popularity has plummeted since the 1950s. Now's the time for a revival.

How do we know it's the one? Because Daniel and I immediately started using it to refer to our little one. I love how it sounds in my husband's voice. And I love how already, it feels like hers.


Megan James is the managing editor of Kids VT. She'll be blogging about her pregnancy until the baby arrives — hopefully in early May.

Bump on a Blog maternity pregnancy
Prev
Next