“Well, your hair looks like we styled it with an eggbeater, so wear a hat today and we’ll deal with it tonight," I said.

It was the week after my then-five-year-old’s last day of preschool. He was sporting his first real haircut, an ’80s-skater-style flip of curls. It was a compromise: I loved the long beautiful spirals he'd had before; he wanted a blue mohawk.

That afternoon, fully embracing summer's arrival, we attended a strawberry festival. Several times he whipped off the hat, exposing his ridiculous rat's nest to itch his head like a madman.

“Come on! Put your hat back on. It was bad this morning, but now it’s all smushed from your hat and it's even worse," I said. "I’m sorry. I’ll fix it when we get home.”

“But this hat is so itchy!”

Now, before you start thinking I'm a terrible mother, let me defend myself: I was eight-ish months pregnant at the time. Controlling my son's hair  — a process that involves yelling (from both of us), copious amounts of conditioner, and 15 minutes of crouching over the side of the tub — felt a little like an Olympic sport.

That night, I drew him a bath and prepared for the main event: Shampoo, condition, crouch. Comb, yell, comb, get yelled at, recondition, comb, comb, comb. Un-crouch. Attempt to stand up straight. Phew.

At bedtime, we read some books and, as usual, snuggled until he fell asleep. Once I was off duty, I made my way out to the couch. Gradually, the fear I’d been swallowing all day began to bubble up. I couldn't ignore it, so I Googled it.

Nothing good comes from Google at 11 p.m. Oh look! You have cancer! Mice are going to eat through your walls and cause an electrical fire! New York City is going to fall into the ocean!

In this case, it was lice: parasites making themselves fat feasting on my son's blood, living in his 'do. I’m losing my shit just thinking about it.

Ready to face the truth, I marched into my son’s room with my iPhone in hand, both as a flashlight and the bearer of catastrophic news. I took a deep breath. Gently, I ran my fingers through his still-damp hair and drew back a chunk by his ear. The light beamed brightly and, a few seconds later, an actual louse dashed across his head like a cockroach at a one-star hotel.

I think I screamed. I may have dropped my phone on his face. I felt like I was hanging from the ceiling trying to turn myself inside out. I was horrified. Upon closer inspection, it was clear that my son’s head had become Studio 54 for the parasitic set — complete with open bar. He was teeming with those blood-sucking bastards.

I tried to find the words to yell for my partner, Bobby, to come keep me from passing out. It was like that scene in Pee Wee’s Big Adventure when he rescues all the animals from the pet-store fire but doesn't save the snakes until last because, well, they’re snakes, and when he finally makes it outside with them squirming through his hands he goes boneless in a heap on the sidewalk.

“I’ll go to the store and get one of those kits,” he said.

“If this baby weren’t in the way I’d be in a ball rocking in the corner right now. So, uh, I’ll just be here doing some modified version of that. See you when you get back. If I don’t throw myself out the window first.”

When he returned — after what felt like six hours — I roused the kid from his bed and dragged him into the bathroom.

My son did not care. I don’t think he was even awake past the first sentence. He sat on the toilet with his eyes closed as I slathered him with chemicals that, for all I knew, could have made my unborn baby come out with a leg growing from her face. Aw, I thought, we could call her Ol’ Legface. At least her brother wouldn’t have lice.

I kept him upright for the 10 minutes required to kill those bastards and coaxed him into the tub.

As I rinsed the poison shampoo from his head, the evidence of the infestation swirled toward the drain: 10, 15, 20 lice, the likes of which I had never seen. Now public enemy No. 1.

I still don’t know how I’d missed it. I had washed his hair not four hours earlier and yet, nothing. I was blissfully ignorant.

I'd always thought lice were white. Wrong. They are clever little bastards that adapt in color to match the host. I thought you’d have to be walking in an ever-present dirt cloud à la Pig Pen to have 20 lice chilling on your head. Wrong again. Those motherf’ers actually prefer clean hair. THEY ARE SMART. THEY ARE TENACIOUS. THEY WILL TRY TO ROB YOU OF YOUR VERY SOUL. YOU CANNOT LET THEM WIN. 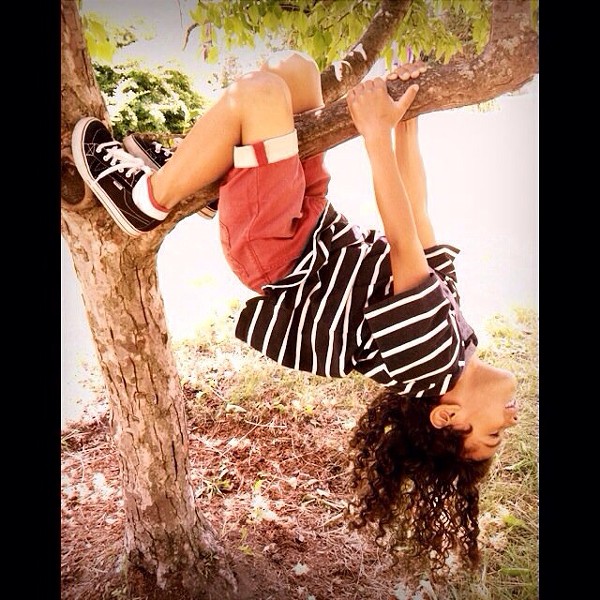 I gave them 18 hours of my life and a generous slice of my sanity over the next two weeks, the true meaning of the term “nitpicking” never more obvious. The kid watched movie after movie as I slid each nit (the egg) down the shaft of his hair between my fingernails. The combs only catch mature bugs, and I was going to be damned if I ever saw another louse crawl about his head.

I flicked the nits into a pool of rubbing alcohol, whispering expletives at every single one. I doused my son in olive oil, tea-tree oil, coconut oil and neem oil — which smells like raw garlic, crushed peanuts and the devil’s ass crack, but seemed helpful. I considered motor oil.

I washed everything. On hot. At the laundromat. (Sorry.)

Bobby only found me crying, clinging to the tattered shreds of mental stability, a few times.

“But they’re smart!" I said. "And the cycle just keeps going. It’s like the Kardashians! I’m not going to make it.”

I’m happy to say, we did make it. No one's head got shaved or stuck in the oven. In the years since, I’ve maintained near daily checks of both my children and so far, so good. Maybe the lice community Googled me: Public Enemy No. 1.

Sara Goldstein writes about her life as a mom on her blog, Oddly Well Adjusted. She lives with her partner and two kids in Burlington.