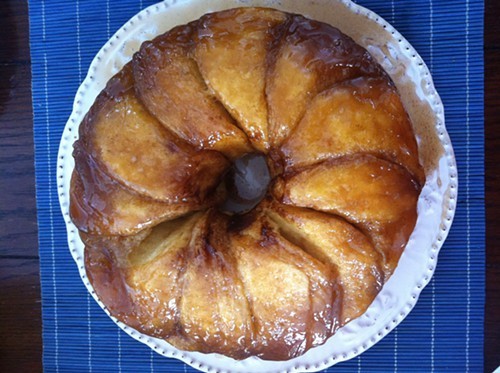 After this record-breaking maple season, my family has been enjoying as much of that golden deliciousness as possible. I recently spiced up a recipe for sticky buns by adding Vermont maple syrup. My mouth was watering before I could even gather the ingredients. You can cheat and use canned biscuits — which I have done before! — but of course it’s even better homemade.

In a large mixing bowl, whisk together the flour, baking powder and salt. Using a pastry blender or two knives, cut the butter into the dry ingredients until the mixture is coarse.

In a small bowl, combine the milk and egg, and lightly whisk together. Stir the liquids into the flour mixture until just combined.

Knead the mixture together until smooth. Place the dough on a lightly floured surface and cut it into individual biscuits, using a biscuit cutter or a round cup.

Combine the brown sugar and cinnamon in a small bowl and set aside.

Bake for approximately 30-35 minutes, or until the middle of the biscuits are no longer gooey. Cool in the pan for just a minute or two, then invert onto a plate. Enjoy!