If you’re a Kids VT reader, you’re probably familiar with our coloring contest. Every month, we get dozens of bright, fun, colorful submissions from budding artists all across the state — and even some from out of state, such as the entries we received this month from Gabriella and Aidan, of West Virginia. 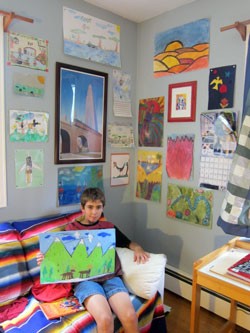 As the Kids VT intern, it’s my job to open the stack of envelopes containing coloring contest entries. It’s one of my favorite things to do here. We all treasure the creative work that comes in — so much so that our managing editor, Kate, has a desk cluttered with past submissions that she can’t bring herself to recycle.

In fact, we share our office with Seven Days, Vermont’s independent newsweekly, and Seven Days staffers are as excited about the coloring contest as we are — they help us pick the winners every month. The week before Kids VT goes to press, we cover our shared conference room table with submissions. Most of us stand around comparing crayon-ed drawings for far longer than is productive.

Over the months, we’ve come to recognize our readers by their coloring styles: Some follow the lines meticulously, others always adorn their entries with stickers or googly eyes, still others consistently opt for a neon or rainbow color palette. Those that incorporate glitter usually get oohs and ahhs, but I like it best when young artists add elements of their own imagining.

This is something that Bryan Ford, 10, of South Burlington, does often. His coloring contest submissions are instantly recognizable — Bryan’s “Snow Cat Cyborg” earned him a place on the February 2012 winners list, and last month’s “Sea Wars” was an office favorite. When this month’s submission, entitled “Tough Dog”, came in, I knew I had to go meet this guy.

When I visited Bryan at his South Burlington home, the first thing I noted was the flurry of artwork lining the walls. For a 10-year-old, Bryan is a prolific artist. He pulled out a few drawings to show me; among them were several detailed plans for a series of fan-powered cars, a few ferry boats, a set of “evil holiday character” cards, and a full page of varying feline facial expressions. As we spoke, he took out a piece of paper and began to demonstrate how to make a flip book.

Though he can’t pinpoint any specific inspiration for his many drawings, he says his grandparents instilled in him a love of art, and that some of his teachers at Orchard Elementary School have incorporated art into the curriculum alongside other lessons. He also enjoys reading Captain Underpants books and graphic novels, and occasionally making comics of his own, though his “favorite book, like the best book ever,” is Brian Selznick’s The Invention of Hugo Cabret. It’s fitting, as many of Bryan’s sketches are as technically intricate as Cabret’s automata.

Asked if he would ever venture to construct any of his drawings in real life, Bryan says that, when he’s “30 or 40,” he’d like to be a builder. For now, he contents himself with LEGO blocks, though his artwork and LEGO construction, he says, rarely intersect. He likes drawing and building things that he’s seen before, such as airports and ferry boats, or pieces from movies, but he also likes to imagine a sci-fi future — one with fan-powered spaceships, flying drones that deliver pizza, and dark, towering cityscapes on Mars or the moon. 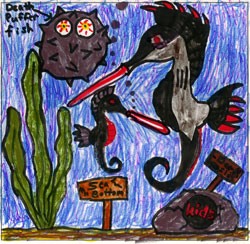 Those are the kinds of Kids VT coloring contests he likes, too. Bryan asserts that “if it looks like a good one, like an outer space one, then I’m really excited.” He treats the contest form lightly, preferring to draw over it and add his own futuristic flair. Of “Snow Cat Cyborg,” he says: “Before, I mean, it was just a cat on ice skates — now it’s a robot.”

His younger sister, Madelyn, enters the coloring contest, too. “She’s learning from me,” says Bryan. “I teach her techniques and stuff, and she’s really good at it.”

Of his art career, Bryan admits that “nowadays, I’m more into playing with my friends, but when I’m bored I definitely draw.” Well, Bryan, we certainly hope you keep it up.

See the winners of the July coloring contest — and find the drawing for the August contest — in the August issue of Kids VT, which hits newsstands on Tuesday, July 31. Pick up a copy at more than 400 locations throughout Vermont. The deadline for coloring contest submissions is August 15.